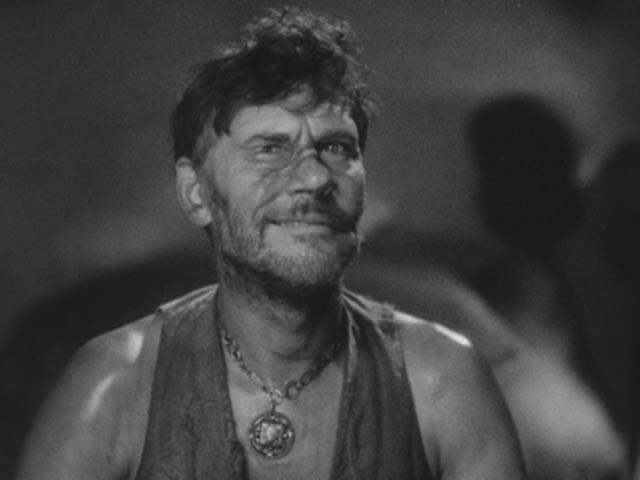 Lon Chaney, one of the biggest screen stars of the silent era, made his reputation less through acting ability than the gimmickry of makeup and body manipulation. He portrayed a series of grotesques, his characters’ terrifying outward appearances mirroring the horrors that lurked within, though on occasion he mixed things up by playing a man with a monstrous disfigurement who, underneath it all, had a heart of gold. Silent films were not known for their subtlety or their progressive bent.

The most satisfying collaboration in Chaney’s career was undoubtedly with director Tod Browning. Both were known for their audacious work in the horror genre, and one of their later collaborations, West of Zanzibar (1928), is perhaps their best. Like David Cronenberg decades later, Browning was fascinated by the relationship between outward physical appearance and inner psychology, though veered away from the idea, popular at the time, that disabilities were manifestations of divine punishment. He often approached the so-called grotesques in his films in a much more humane manner than other directors, yet many of his films still had problems, such as the recurring theme that a woman’s infidelity is so destructive that it ruins lives for generations and turns kind men into cruel villains. 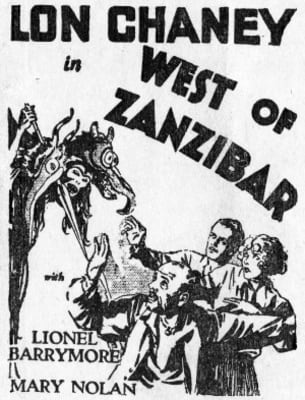 And that is exactly what happens to magician Phroso (Chaney) in West of Zanzibar. When he learns his beloved wife is fleeing to Africa with the scoundrel Crane (Lionel Barrymore), Phroso begs Crane to let her stay. As Phroso pleads, Crane pushes him off a balcony, rendering him paraplegic. This, in typical silent horror fashion, signals Phroso’s immediate metamorphosis from raging milquetoast into an inhuman sociopath. One year on, his wife returns with a baby in tow, just in time to die of unspecified causes as Phroso vows revenge upon both the bastard child and Crane.

Seventeen years of psychotic grudge-holding later, Phroso is hunkered down on island located just west of Zanzibar. Going by the nickname “Dead-Legs,” he sits like a spider inside his seedy bar, plotting revenge on Crane, still in Africa all these years later. Dead-Legs has also been paying handsomely to keep his wife’s daughter Maizie (Mary Nolan) in a whorehouse in Zanzibar. Now 17, Maizie is kidnapped by Dead-Legs and brought back to the island, forcibly drugged, humiliated and sexually abused by the men Dead-Legs’ employs. After she’s thoroughly destroyed, he summons Crane to show him what’s left of his daughter, but a surprising revelation destroys his plans for revenge.

West of Zanzibar features sharp storytelling, psychological horror and a quick pace, and is just a touch ahead of its time; both Warner Baxter and Nolan give modern, strong performances that anticipate the pre-codes just a few years later. There is more than a hint of Colonel Kurtz in Dead-Legs, and much of West of Zanzibar, and the Broadway play it was based on, derives from themes introduced in Conrad’s Heart of Darkness.

The film, however, fails on a few levels, mostly in its focus on Chaney, with lingering shots that seem to do nothing but frame the disabled as freakish and play into Chaney’s cult of personality. The film’s racism is another weakness; racism was nothing new in 1928, of course, but where the traditional negative value attributed to “blackness” is subverted in Heart of Darkness, in West of Zanzibar is it bastardized back into the original centuries-old black as bad, white as good tropes. In doing so, it unintentionally undermines the psychological exploration in the story, turning it into a basic morality tale, and rendering the Africans’ vague voodoo ceremonies a mere excuse to engage in Colonialist stereotypes of cannibalism and savagery.

Somehow, the 1932 talkie remake Kongo is worse, portraying the Kongolese as Stepin Fetchit caricatures, which made no damn sense. Frankly, little about a remake of West of Zanzibar made any damn sense. Chaney and Browning had already made Where East is East (1929), so similar to West of Zanzibar it might as well have been a remake. Despite this, MGM still wanted their talkie remake and were willing to make quite a few concessions to get it. Neither Chaney nor Browning were available in 1932; Chaney had since died, and Browning had moved on to the grittier (and career-ending) project of Freaks. So the studio hired the inexperienced William J. Cohen to direct and Walter Huston, who had originated the role on stage, to star. 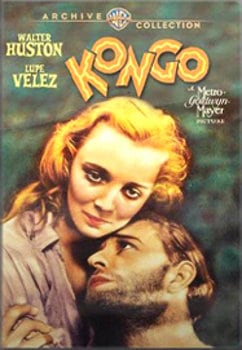 The culture was changing as rapidly as the technology of filmmaking, and what worked as entertainment in the late 1920s was already becoming outdated by 1932. This was especially true with remakes like Kongo. The staging and tone of both films is nearly exact, and significant footage from the original is re-used in the remake. It’s a sad waste of the talents of cinematographer Harold Rosson, who had done such stunning work in early talkies like Madam Satan and Tarzan the Ape Man, but in Kongo inexplicably seemed forced into static, mid-distance shots for every scene.

Actors, too, were wasted in their roles. Walter Huston, despite having played the role on Broadway before West of Zanzibar was made, appears to be mimicking Chaney throughout. Not only that, for any scenes where a ceremonial mask was worn, clips of Lon Chaney from West of Zanzibar were used instead of new footage with Huston; for what reason is unknown. If the studio was hoping Huston would act as surrogate Chaney, they must have been disappointed. Chaney could milk the pathos for all it was worth, but Huston was as warm as the deep center of an ancient iceberg, and when called upon to appear repentant he simply could not.

While little was changed in the plot, Kongo did add salaciousness by intensifying the references to drugs and incest, and including some ugly scenes with monkeys and leeches. The character Tula (Lupe Velez) was also added, but Velez, as well as Conrad Nagel, were sadly underused. Nagel’s drugged-out desperation and Velez’s effortless sex appeal are fascinating but feel out of place in this paint-by-number remake; they should be off at Warner Bros. in a nasty little pre-code directed by William Wellman, not languishing in Kongo.

Yet for all the things taken directly from the original, some of the most powerful scenes in West of Zanzibar are omitted from Kongo. The dialogue is patently ridiculous, at times incoherent, such as the childish gibberish passed off as native African language. There is also an early iteration of the “boomstick” ploy, delightful to Evil Dead fans but otherwise useless. West of Zanzibar is a gripping drama with a few flaws, and though studios in the 1930s may have thought a talkie remake of a silent was a necessity, we now know otherwise, rendering the far inferior Kongo entirely superfluous.