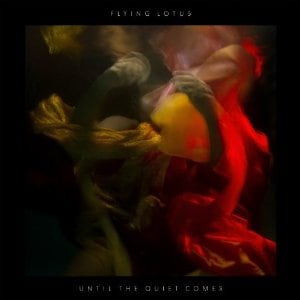 [xrr rating=4.0/5]Flying Lotus’ last album, Cosmogramma set a high water mark for experimental electronica, full of insectoid rustling rhythms and the disorienting sound of alien cyborg minds interpreting lost human dreams. On his latest, Until the Quiet Comes, FlyLo turns away from that tension and moves into a more mystical zone of consciousness without surrendering his musical center. The beats may not be as skritchy as before, but he continues to explore polyrhythmic expression with an avant-garde edge.

The new tracks are grounded in a rich electronic foundation, but they often toy with the trappings of jazz music and have a film score-worthy feel. FlyLo uses ordinary techniques like synth washes, looped segments and grinding bass, but he regularly defies convention with odd combinations and surprising contexts. Trip hop, ‘70s easy listening, electro-pop and Deustchrock motorik are all part of his vocabulary. On “All In,” he takes a deceptively simple drum beat and builds rhythmic complexity with busy melodic phrasing and stray bits of percussion. The song sets up a sweet contrast between the tight drum line and the shimmery washes of music. The loose waves fade down and dissipate to close out the track with Niki Randa’s ethereal vocal: “Was it not for us to claim?/ Win the game.”

FlyLo continues to walk this softer path for the next couple of tracks, culminating in the dreamy free jazz sound of “Heave(n).” Then, on “Tiny Tortures,” he erects a complex beat with a collection of electronic and percussion sounds. Weird and dreamy, with an alien beat, this is the first song on the album that alludes to the sounds of Cosmogramma. Later, on “Until The Quiet Comes,” that link becomes more explicit. A bit like the second half of Cosmogramma’s “Zodiac Shit,” the beat is assembled with layers of interlocking elements. Both give the rhythm a crisp, clear tone over a meandering bass. “Until the Quiet Comes” lays down a wicked blown speaker rumble on the low notes. Near the end of the track, Stephen “Thundercat” Bruner plays a tight chromatic bass line that drives up the energy for the transition to the soft-focused sound of “DMT Song.”

FlyLo’s rhythmic experimentation may be his hallmark, but Until the Quiet Comes} also features a grab bag of intriguing production choices. “All The Secrets” is cut and mutated, with a host of cool details to fixate on. The irregular beat is glitchy, punctuated with chirps and beeps. It’s backed with a deconstructed R&B vibe built from a piano sample that slowly fills out over repetition into a full melodic line. Just as you lock into the tranced out effect, it sidesteps into a brief looped break and then an 8-bit video game music feel, before drifting back home. Each step along the way covers a lot of ground but the transitions flow smoothly.

On Until the Quiet Comes, FlyLo imports a few guest artists into his musical space. He starts off “See Thru To U” with a pop song structure. Erykah Badu’s vocal is simple, but blurred with a bit of echo. The syncopation stays constant, but the pop framework drifts away to leave a more free form jam that is reminiscent of Frank Zappa’s work on “Outside Now” ({Joe’s Garage Acts II & III}). Badu’s voice scats along with the jam. On the other hand, Thom Yorke’s contribution on “Electric Candyman” is quite a bit harder to recognize.

Among Until the Quiet Comes’ many great tracks standout “Hunger” fades in with a cinematic mood enhanced by a touch of Pink Floyd psychedelia. Randa’s echoed voice sounds like a phonograph playing in the fog. Sharp pinpricks of notes push through the languid washes of echo and synth. It’s hypnotic as Randa’s breathy voice puts an ominous spin on “I’ve hungered for you for far too long to stop now.” The music fades with a minute and a half still left: FlyLo has a penchant for fake endings and juxtaposing separate songlets in the same track. In this case, the second section is a short reflective interlude, but its experimental dream pop sound owes more of a debt to Radiohead than Pink Floyd.

Until the Quiet Comes is satisfying because it‘s packed with a variety of moods and sonic focal points. Its perspectives can enhance a sunny bicycle commute or the shadowy embrace of a dim room. Fans of FlyLo’s earlier work will still find the intricate polyrhythms and off-kilter mesh of jazz and electronica. New listeners can enjoy the smooth blend of analog and electronic instruments as well as the contrast between tight beats and loose melodic elements. Compared to Cosmogramma, it might seem too safe and approachable. But dropping some of that frantic pace leaves room for more open ended wandering. This can yield moments of dissociation, like on the first half of “me Yesterday//Corded,” or evocative moments like “Hunger.” It’s a worthwhile trade off between dense microcosms to marvel at and new, unseen vistas to map out.