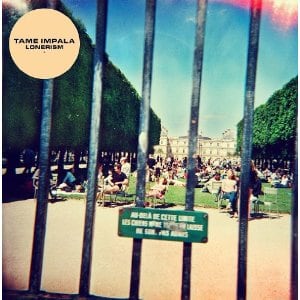 [xrr rating=2.75/5]Just as with their 2010 record Innerspeaker, there are immediately recognizable genre markers and influences on Lonerism, the second album from Australia’s Tame Impala. You could create an immense list of classic rock acts, from the Beatles to Jimi Hendrix to Pink Floyd, that constantly loom over their work. Kevin Parker remains the main driving force behind Tame Impala, handling the majority of the songwriting and sonic construction. On Lonerism, Parker seems to move away from the solitary songwriting confinement of Tame Impala’s debut record, crafting a more confident and varied set of tunes that expands the band’s aesthetic while moving away from the ‘60s guitar-rock of their debut.

This expansion of sound doesn’t mean that Parker and company have left their influences behind. In fact, from the very beginning, Lonerism sounds like a collage of the classic and new rock canon, a patchwork of genre indulgences. Opening track “Be Above It” builds its rhythm out of a matched vocal-and-drum loop – an intriguing production flourish reminiscent of the vocal percussion of Spoon’s “Stay Don’t Go” – before delving into a pitch-perfect impression of Beatlesque harmonies. It’s a rousing, heady start that creates a momentum that the rest of Lonerism simply refuses to sustain. “Endors Toi” employs the swirling guitars and synths that were peppered throughout Innerspeaker, but the psych-rock effects are used to no discernible endgame, plodding away without a creative vision. Like “Endors Toi,” the majority of this LP comes across as a jam record devoid not only of memorable moments, but of charm, direction and nuance. Much of Lonerism is content to endlessly layer tape loops and wah-wah guitar, pointing to potentially innovative ideas rather than executing them. The result is a shapeless, bloated 50 minutes with very few moments that demand a revisit. Moreover, there’s no sense of dynamics throughout the record, especially on the wandering, fuzzy “Music to Walk Home By” or “Keep On Lying,” a track that calls to mind the Doors.

The relative lack of identity present throughout Lonerism does make its more memorable moments stand out. Lead single “Elephant” employs a swinging, heavy guitar riff and unpredictable kit work. Before the driving two-note riff gets tired, Tame Impala dive into a stellar break punctuated by a perfectly restrained guitar solo. It’s a rare moment that displays the band’s ability to craft a song that not only pays homage to its genre forbearers, but also shows creative shifts in texture and delivery. Despite being overlong, “Apocalypse Dreams” stands out because of its dedication to creating a memorable conglomeration of disjointed elements. The bouncy electric keyboard battles against the overdriven guitar and endless percussive flourishes, creating a cathartic, constructed cacophony. “Mind Mischief” revels in a more straightforward guitar riff, building the song one riff and harmony at a time. It’s a simplistic but rewarding cut, a welcome moment of brevity and clarity amongst the clutter of muddled ideas.

With the exception of those few tracks that blend Tame Impala’s experimental production side with a more pop-centric focus on songwriting, Lonerism amounts to little more than a haphazard flip through your local record store’s forgotten psych-rock section. Parker and company clearly have the chops to execute a loving tribute to headier times, and Lonerism is occasionally an intriguing trip through the history of recording techniques and technology. These production flourishes are in vain when applied to songs so lifeless, shapeless and forgettable.