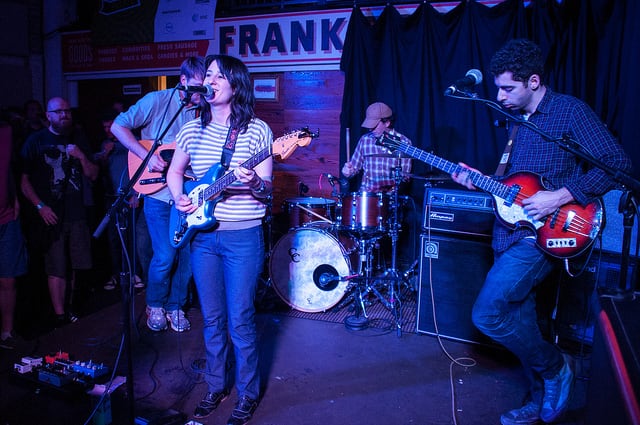 The self-titled debut LP of Brooklyn indie-pop group Hospitality was released earlier this year. It’s a consistently fun and intermittently profound record, one that could easily be forgotten when it comes time for end-of-year lists because of its January release date. This potential oversight is a shame because the album rather impressively explores the problems of post-college liberal arts graduates without seeming pretentious or esoteric. Lead singer Amber Papini’s gentle voice carries the catchy songs about angsty relationships, intellectual restlessness and regretful decisions.

Since the LP has been such a staple of my musical diet throughout the year, I was excited to hear the band live for the first time when they recently came through Chicago. My enthusiasm was tempered, though, by reports from various friends and bloggers that the Hospitality on stage can’t compete with the Hospitality on record. The full, poppy arrangements from the LP couldn’t transfer with only four people on stage, I had heard. These concerns seemed legitimate since the band is relatively new and might still be finding their sea legs before an audience.

Fortunately, most of these fears were unfounded. Hospitality played a relatively short, but energetic and skillfully executed set at Schubas before a calm yet appreciative crowd. From the opening guitar riff of “The Birthday,” it was clear the band wasn’t going to hold anything back on stage. As the song progressed, the bass and kick drum lined up perfectly together, forming a solid base upon which the rhythm and lead guitars could ride. Despite the despondent nature of its first choppy lyric, “Always got your frown,” there would be mostly smiles among the audience members that night.

The band played most of the highlights from their debut LP. With the rhythm guitar-lead guitar-bass-drums lineup, the synth sounds that back up several songs on the record were conspicuously absent. The energy with which the quartet on stage approached their minimalist sound more than made up for the missing parts of the familiar sonic palette. The caustic rhythms of “Friends of Friends,” the pleasant melodic complexity of “Eighth Avenue,” and the emotional wistfulness of “Sleepover” all hit hard during the gig. The band got extra enthusiastic applause at the start of “Liberal Arts,” the tale of those who choose a B.A. in English Literature over “something more practical” and before the encore “Argonauts,” a song that really shows off the expressive abilities of Papini’s voice. In addition to these reliable standbys, the band tried out several new tunes. While these were a little bit looser than the LP tracks and clearly still need some fleshing out, the burgeoning vitality beneath the surface made these performances worthwhile as well.

The crowd definitely didn’t go crazy at this small show. I stood at the very front of the room by the stage, but every time I looked behind me, I saw more hipster-style head nodding than dancing. Despite its groovy nature, Hospitality’s music is perhaps more contemplative than dance-inducing anyway. It’s true that Papini comes off as a bit aloof on stage, projecting a rather shy demeanor in between songs. Some might say that the lack of much stage banter might prove the band wants to hold its audience at arm’s length. Nevertheless, with music as fun and effectively executed as Hospitality presented at Schubas, who needs talk anyway?