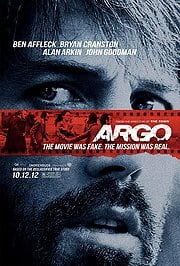 [xrr rating=3.25/5]The advertising team behind Argo may want you to believe their product is a pulse-pounding thriller full of near escapes and horrific violence, but besides two tense set pieces, Ben Affleck’s latest movie is full of a lot of waiting around. Channeling his inner Alan Pakula, the actor/director has created a detailed, true story that has some trouble finding its footing between political thriller and suspense movie.

Set in 1979 and 1980 during the Iran hostage crisis, Argo does not really concern the 52 Americans held for 444 days, but a group of six people hiding out in the home of the Canadian ambassador and the larger than life rescue mission that extracted them from the hostile streets of Tehran. In prior directorial outings Gone Baby Gone and The Town, Affleck proved a surprisingly steady hand behind the camera and Argo continues the trend of solid, but not very adventurous, filmmaking. Here, Affleck plays CIA operative Tony Mendez, hiding behind a beard and shaggy mop of hair. Mendez hatches an idea to save the six Americans in hiding: pretend they are members of a science fiction film called Argo who are in Iran scouting for locations. But to make the ruse work, Mendez must actually trick Hollywood into thinking an actual film named Argo is in production, enlisting the help of a filmmaker and make-up artist to pull off the ploy.

Argo is at its best in scenes such as its stunning opener where a clutch of Iranians, irate that the Shah has fled to the United States, storm the American embassy. Meanwhile, the people inside the building race to burn and shred sensitive documents. It’s a dynamite opening that mixes archival footage with recreation and sets the tone for an exciting film. As the Iranians break into windows and airshafts, a group of six Americans make their getaway out the back, finding refuge with the Canadians.

The momentum doesn’t last for long as the story shifts to Mendez in the United States. By tossing in a half-baked story about his neglected son, Affleck really doesn’t give us much to grasp in his character. He is a rescue expert and that’s about it. Affleck’s flat performance doesn’t help either. But surrounded by a bevy of more flamboyant actors ranging from John Goodman to Bryan Cranston and Alan Arkin, Mendez doesn’t have to be flashy or cocky. He just needs to get the job done. However, Affleck couldn’t leave well alone in some spots, allowing for a gratuitous shot of Mendez without a shirt and other action movie clichés that have no place in Argo.

After an elaborate set-up, Mendez arrives in Tehran where he must not only meet up with the missing six, but teach them the particulars of their new identities. Each of the six must become someone new, embodying the role of director, screenwriter and producer to mount the great escape. And the final tense moments when it seems everything is going to go tits up are pretty damned suspenseful. Affleck must want us to experience the bitter fear the six are feeling when they expose themselves. It’s palpable.

Affleck walks a fine line with his portrayal of the Iranians and he knows he must refrain from portraying them as the howling mobs that Fox News has liked to show us since 9/11. Argo is clearly on the side of the Americans, but even the Iranians like a little movie magic. Look out for the wonder on the faces of the Revolutionary Guard at the airport. It is likely you will walk away from Argo’s better moments with the same sort of expression. An even greater coup would have involved the whole thing.