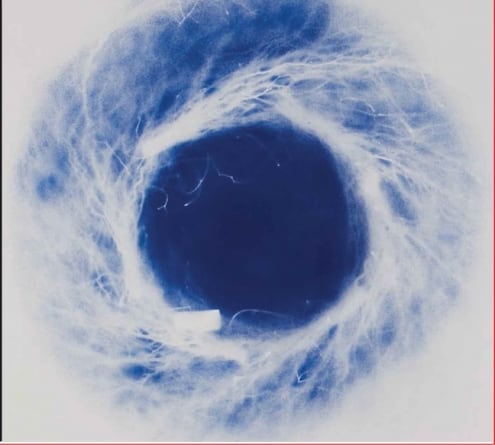 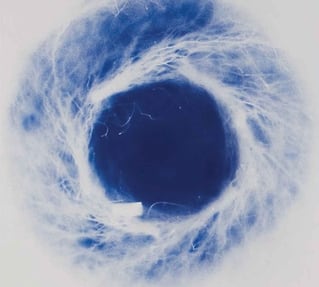 Let’s get one thing straight at the outset: Yoko Ono did not get Kim Gordon and Thurston Moore back together to make YOKOKIMTHURSTON. When the one-sided single, “Early in the Morning,” was released in June, the internets were a-Twitter with speculation that the Sonic Youth power couple had reunited for this project, a benefit for Ashinaga Rainbow House, an organization providing earthquake and tsunami relief to Japan. The plainly packaged 10″ was completely devoid of any explanatory text, allowing for plenty of wishful thinking to fill the void—even Billboard got in on the act. Sure, it makes for a great story: the woman who broke up the Beatles saves Sonic Youth—but it’s simply not true. In fact, YOKOKIMTHURSTON was recorded on February 26, 2011 (four months after an appearance together at the Orpheum Theatre in Los Angeles) and some seven months prior to the announcement of their divorce. With both Gordon and Moore pursuing new bands (Chelsea Light Moving and Body/Head respectively); it is becoming increasingly clear that Sonic Youth is history. As a long-time fan, this is sad news; but all the sordid personal stuff is ultimately none of my business and totally irrelevant to evaluating this record, which is actually a remarkable collaboration between these preeminent avant-garde artists.

This brings up another point that bears repeating, especially to Beatlemaniacs who might wish to believe otherwise: Yoko Ono was a respected artist long before anyone had heard of John Lennon, having appeared on stage with the innovative composer John Cage way back in 1962 (conveniently documented on the recently released John Cage Shock Vols. 1-3). Moreover, it was at an opening of her artwork at the Indica Gallery in London where Ono met Lennon for the first time—and she had no idea who he was! You may think her art and music is crap but you would be wrong: her works can be found in the permanent collections of several top-tier museums, including the Museum of Modern Art, the Hirshhorn Museum and the Guggenheim Collection. You may not like it, but facts is facts.

As for Sonic Youth, they are widely revered as a seminal post-punk rock band, but they always displayed grander ambitions and a decidedly abstract, intellectual bent—after all, Kim Gordon had penned articles and reviews for the ultra-prestigious Artforum magazine before Thurston Moore came along and handed her a bass. From the very beginning, their connection to the fine art world belied their true ambitions, including collaborations with James Welling, Raymond Pettibon and the late Mike Kelley. Their unique tunings and “preparations,” such as wedging a screwdriver between the strings and fretboard, were not just instances of DIY punk fortuity; they were inspired in part by experimental composers such as Cage and Harry Partch. After attaining a modicum of commercial success in the 1990s (not to mention increasing musical proficiency), Sonic Youth reveled in a wide variety of experimental activities both within and outside the band, compiling a staggering discography of avant-weirdness along the way, most notably the series of records on their own SYR label. On Goodbye 20th Century (1999), they convincingly present graphic scores from composers such as Cage, Christian Wolff, Steve Reich—and Yoko Ono (“Voice Piece for Soprano” (1961), performed by Gordon and Moore’s then-teenage daughter, Coco Hayley Gordon Moore).

So this collaboration seems not only inevitable but necessary. And it sounds about like what you would expect: Ono does her thing while Gordon and Moore make spacey guitar noises. But the 79-year-old Ono’s voice still sounds as radically out-there as ever while Gordon and Moore have developed a seemingly limitless repertoire of extended guitar techniques with which to support her: buzzing and scraping; plinking and grinding; and occasionally playing more conventionally as well. What is surprising is how quiet most of the music is on YOKOKIMTHURSTON. Only on the final two tracks does the intensity rise to rock-ish levels with full-bore skronk on “Let’s Get There” and the epic 14-minute single, “Early in the Morning.” Still, there are moments of delicate beauty like the exotic gamelan and koto sounds which surround Ono’s feline yowl on “I Missed You, Listening” or Moore’s breezy acoustic guitar strum accompanying Ono’s sprechstimme vocal duet with Gordon on “Mirror Mirror.” Traces of Dadaist humor can also be found scattered throughout, as on “Running the Risk,” where the three vocalists alternately intone random-seeming phrases (“Defy the elements/Sticky floors/Being booked, etc.”) before launching into another joyful noise jam.

YOKOKIMTHURSTON is the sound of three mature artists at the pinnacle of their careers but we might lament that this collaboration did not happen sooner and was not allowed to blossom further. For, despite all the outré soundscapes, the trio plays it a little safe: the six long tracks never quite deliver on the ecstatic payoff this super-group seemingly promises and instead settles for an elegant stasis. Then again, that is probably an inappropriately rockist viewpoint on what is really modern electric chamber music. Tightly controlled chaos was a hallmark of the Fluxus movement from which Ono emerged and defying expectations was an integral part of its revolutionary spirit. Haters will surely hate this, but connoisseurs will appreciate YOKOKIMTHURSTON as one of the finer examples of Sonic Youth’s non-rock records.

Rodger Coleman attended the New England Conservatory of Music and later formed the punk-jazz band, UYA (a/k/a “Upstanding Young Americans”). Their eponymous CD was nominated for a Boston Music Award in 1991 and a 1994 performance of Sun Ra’s “Dancing Shadows” appears on Wavelength Infinity: A Tribute to Sun Ra (Rastascan). After the band broke up, Rodger and his wife moved to Nashville, where he continues to record music in his home studio, some of which can be found on the Internet Archive. An avid record collector, Rodger writes about what he’s listening to on his blog, NuVoid.