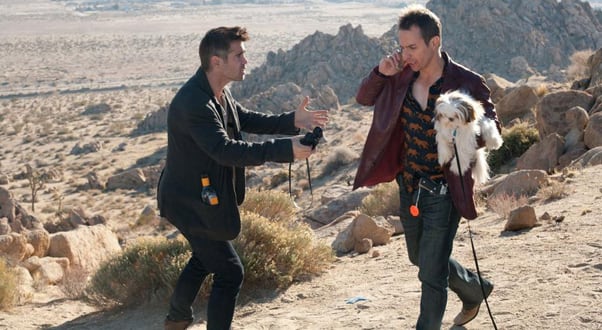 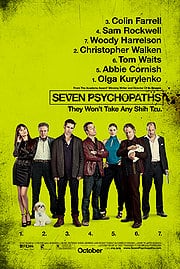 A cadre of whackos and crooks populate True Romance, the 1993 Tony Scott-directed/Quentin Tarantino-written film where you can see Brad Pitt smoke pot out of a honey bear and Gary Oldman play a racially-confused pimp. But the one scene that everyone still talks about nearly 20 years later features Christopher Walken and Dennis Hopper. The former is a mafia hit man, working on Hopper’s character for information. Knowing that he is a dead man, Hopper spouts a final soliloquy about the origin of Sicilians (hint: they were spawned by people with dark skin and this being Tarantino, we hear the “N” word a lot). This scene added a strange gravitas, not to mention alertness, to a movie filled with shoot-outs, drug deals and double-crosses. In his sophomore feature Seven Psychopaths, playwright/filmmaker Martin McDonagh attempts to stretch the essence of that scene across the runtime of an entire movie.

In this self-aware, talky and often hilarious film, McDonagh assembles an A-list cast and creates a loose commentary on violence and peace in the movies, one that is so funny that you can forgive the Irish writer for not completely pulling it off. The film’s title refers to the unfinished screenplay that Marty (Colin Farrell, so much better here when doing comedy), agonizes over while his world goes to hell around him. Just like McDonagh’s prior film In Bruges (2008), Farrell plays a tortured character who is struggling to maintain calm while the bug-eyed people around him run amuck. However, McDonagh decides to dabble in the meta in Seven Psychopaths, a trick that may have elevated Adaptation to the pantheon of aughts classics but feels a little tired and pat this time around. The thin plot is this: Marty’s deranged friend Billy (Sam Rockwell) is a dognapper (along with the solid Walken as his partner Hans). When Marty steals the Shih Tzu of crazed Mafioso Charlie (Woody Harrelson), he enmeshes both Marty and Hans in a situation that can only end in blood. Meanwhile, a masked psychopath is systematically whacking Charlie’s henchmen (including hilarious turns by Michael Pitt and Kevin Corrigan), leaving Jack of Diamonds playing cards at the scene as his signature.

The plot in Seven Psychopaths is only an excuse for McDonagh to shed some blood and wax poetic about the “psychopathic” world of getting a script done in Hollywood. It’s scattered, for sure, especially when breaking away from the main narrative to feature the stories of the seven psychopaths, some real (Tom Waits tells his tale as a bunny rabbit-clutching serial killer-serial killer) and some imagined (an ex-Viet Cong soldier travels to the USA to avenge the My Lai massacre). Best of all is Harry Dean Stanton in a wordless role as a Quaker psychopath. However, not all of these scenes add up to create an extraordinary whole. But they are amusing as hell.

McDonagh is a talky writer and many movie scribes have drowned this way trying to ape Tarantino. But a shitty facsimile of Tarantino he is not. The film begins as a pair of hit men discusses the virtues of stabbing someone in the eye while waiting to knock off a mark. But unlike In Bruges, which featured a narrative that centered on three strong characters, Seven Psychopaths plays out like a series of strong vignettes, loosely strung together to create some sort of unified treatise on violence, all the while bumping off many of its principal characters before the film’s end.

What Seven Psychopaths has going for it is an ensemble that rivals the weirdness factor of True Romance, a collection where Farrell, Rockwell, Walken, Harrelson and Waits (along with Željko Ivanek) sink their teeth into roles both poignant and pithy. In its commentary on violence and moviemaking, Seven Psychopaths presents us with an interesting conundrum: is there a way to make a pacifistic action movie without a final shoot-out and bloodshed? While Farrell’s character argues that a final showdown isn’t really necessarily as the trio hide out from Harrelson’s men, Rockwell (and the movie itself) posits that a film can’t be a film without a climactic arterial release. Sergio Leone had it right so many years ago. It’s an interesting, if not failed challenge, especially when McDonagh adds a coda about the Vietnamese psychopath that attempts to bump up the film into the realm of Buddhism and enlightenment. This emotional scene doesn’t fit the timbre of the movie, but I can see what he is trying to do here.

With a little more focus, Seven Psychopaths could have been a jagged take down of violence in the movies. McDonagh’s handling of his female characters is hilarious and horrible in a self-aware way (Hint: most aren’t very nice and they don’t last long, but I suppose being meta forgives misogyny). Rather than knock it out of the park like he did with In Bruges, McDonagh instead gives us a highly entertaining movies filled with laughs, violence and some wonderful performances. And sometimes seven psychopaths are better than one.