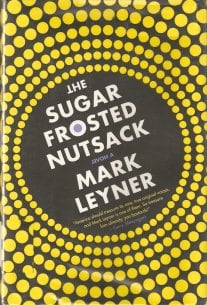 I’d like to imagine that Mark Leyner collapsed onto his bed, curled up into the fetal position and then stayed there for a year or so after turning in The Sugar Frosted Nutsack, his third novel and first in 15 years. The extent to which each and every delirious sentence is so packed full of demented detail, callbacks, pop culture name drops, and bold, italicized prose is so exhausting to read, Leyner had to have collapsed upon finishing the actual writing of it. That’s the only plausible scenario I can conjure for an author after he completes something as decidedly wacked out as this. The Sugar Frosted Nutsack is a maddening, thrilling and sometimes frustrating read, but, to be clear, it’s quite unlike anything I’ve ever read before and probably will henceforth.

The novel takes so many twists, turns and loop backs through those twists and turns, that trying to provide a cogent synopsis of the plot makes little sense. It’s important to note here that The Sugar Frosted Nutsack is both a novel about the creation story of The Sugar Frosted Nutsack and the actual Sugar Frosted Nutsack itself. Things get a little meta in here. Whatever it is, the narrative revolves around the life of Ike Karton, an unemployed butcher in Jersey City who is fated to meet a violent and untimely death at the hands of Mossad, the FBI, or some of the more nefarious Gods that populate the book, depending on which point you’re at in the narrative. That’s not a spoiler by the way, Ike is given up within the first 35 pages of the book, and the fact that his fate is foretold somehow only ratchets up the tension towards the end of the novel. Ike’s fate aside, the rest of the narrative lies with his interactions with the Gods, a seemingly endless collective of characters that reside on the top floor of the Burj Khalifa in Dubai. Their creation story, and indeed their behavior throughout the novel makes the concept of Dionysian excess look like downright Protestant orthodoxy in comparison. There are far too many of them to detail but XOXO, a devious God who looms large over the narrative, is important to take note of. XOXO has a habit of kidnapping mortals’ souls to a hermitage deep below Antarctica where he plies them with psychotropic substances for years upon end that only translate to a few seconds of unconsciousness for the unwitting victims once their souls are returned to their mortal bodies. He’s also hell-bent on undermining the narrative of The Sugar Frosted Nutsack for no other reason than he simply gets a kick out of fucking with it. Can you follow all of that?

Therein lies the central problem with Leyner’s demented creation. With every recursive loop back to explain the provenance of how the narrative came to be, and with every five additional pages of meta commentary on the validity of the previous explanations (…experts have debated), The Sugar Frosted Nutsack becomes as much an exercise in the reader’s stamina as it is a pleasurable novel to read. Leyner even tacitly acknowledges the frenetic dissonance of the novel in the final pages of the book, noting “…it’s all speeding up now, this fucked-up caffeinated cacophony, in reverse, as XOXO tries to expunge the epic, with all its excruciating redundancies, heavy-handed, stilted tropes and wearying cliches…” The constant, looping repetition and meta-asides get in your head the way a bad trip on mushrooms, or a particularly awkward moment in a “Tim and Eric” bit might get to you. They’re the cringe-worthiest of your life’s great experiences.

It’s worth suffering through them though for the moments of divine comedy that are unearthed from the surrealistic wreckage. The creation story of the Gods that comprises the first 34 pages of the novel is a tour de force from Leyner’s over stimulated imagination, an enthralling opening salvo that softens the blow of some of the meta loop-dee-loops that come after it. A chapter written as a tabloid style-expose of The Sugar Frosted Nutsack contains a “Sex Advice From The Gods” article that made me shake with laughter upon repeated readings. Ike, for all of his schizophrenic undertones, is written as a pitch perfect, New Jersey chauvinist, and his flirtations with the waitresses of the Miss America Diner are riotous and all too familiar if you’ve ever encountered one of the aforementioned chauvinists in real life. I’ll leave it at the fact that his standard order is a beef tongue sandwich and let your imagination take it from there.

So, you have to take the surrealistic-good with the surrealistic-bad to get through The Sugar Frosted Nutsack in one piece. Leyner’s take on one of the oldest concepts in fiction, the tragic hero, his fate wrought by the Gods in heaven, is spun in such hallucinatory detail that it makes mucking through the overwrought meta-ness of it all worth it in the end.