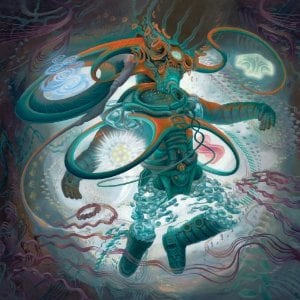 [xrr rating=2.0/5]There are bands of which you simply are a fan or are not. Sometimes it’s because an established image or sound grates against you, like Fallout Boy. Sometimes relentless experimentation can make it impossible to predict whether you’ll ever be able to more than randomly listen to whatever phase a musician is in, like Scott Walker. Coheed and Cambria are one such band, in the sense that the arc of their career and ambitions have all but guaranteed that they will accumulate few new fans in the years to come, but their existing audience will likely be diehard loyal. Their newest and sixth album, The Afterman: Ascension is pretty much as solid evidence as you could ever need for that. And by the way, I’m not a fan.

A big part of Coheed and Cambria’s increasing insularity is the nature of their music: aside from being best described as prog-rock with 1990s heavy alternative elements (and believe me, I took no pleasure in putting those words in the same sentence), their albums are concept albums. All of them. Not only that, but they tell a single sustained storyline of a science fictional future universe collectively called “The Amory Wars,” starring the titular, fictional Coheed and Cambria, a pair of superhuman protagonists who battle an Archmage and give birth to a universal savior who coincidentally shares the name of lead singer/writer Claudio Sanchez. Got it? Good, because you really have to be all caught up on the story to get the full impact of The Afterman: Ascension. And perhaps the band is more interesting in continuing their tale than appealing to newbies, and that’s admirable in a way. At the very least, their run of albums shows a remarkable ability to keep on target on a single ambition.

On the other hand, that same dogged devotion does not often translate into interesting or creative music. While brief opener “The Hollow” is actually a strangely lovely, keyboard driven track, it’s a two minute and 11 second misleader. The majority of The Afterman: Ascension is the kind of sludgy, riff heavy rock that lead Coheed and Cambria to tour with the likes of Slipknot and Avenged Sevenfold. Which is not to say it’s awful, per se; merely uninspired, taking riffs that Heaven & Hell would probably find derivative. In particular, the penultimate track “Key Entity Extraction IV: Evagria the Faithful” is the worst offender, stretching monotonously heavy guitars from Travis Stever and Sanchez and the singer’s melodramatic wail for over six minutes with no real peaks or even a consistent musical motif.

But at this point in their career, it would seem Coheed and Cambria are not as interested in their music as its ability to tell the story they’ve be outlining for so long. Which, if they’re successful on that side, it’s a kind of victory, though of the variety which has made the pretension and goofiness of prog rock a perennial joke. But as a medium for expanding their musical boundaries, it’s a failure, merely just more of the same. Fortunately, they already have the next chapter slated for next year: The Afterman: Descension. That’ll be sure to find some new fans.