Convoluted sci-fi plots, especially those involving time travel or alternate realities, often mimic the effects of the “invisible” garments in “The Emperor’s New Clothes.” The less evident a narrative’s meaning, the more stubbornly viewers and critics alike insist they see genius. And one needs look no further than humanity’s historical propensity for eschewing logic in favor of seeking guidance from cryptic texts to see that we as a species tend to get our jollies from oblique nonsense. So when a buried film like 2001’s Donnie Darko (it was originally slated for straight-to-DVD release) rises from the dead to dazzle armchair philosophers with its pretzeled space-time constructs − when it’s not oozing with nostalgic ‘80s references or creeping us out with a giant bunny rabbit, that is – the movie becomes one of those cult classics with a rabid following so humorless about its purported virtues that it could conceivably spawn an actual cult.

As is true of any unexpected twist or turn, Donnie Darko can be a wild ride when you don’t know what the hell is going on. Just don’t call this movie profound. Despite his knack for cinching up loose ends, director Richard Kelly’s debut feature can’t hold together and ends up falling apart at its climax like a jumbo jet passing through a wormhole. For as much as the malevolent six foot tall bunny Frank (James Duval) talks about time travel, this isn’t really a film about the subject. Rather Donnie Darko actually deals with parallel universes. Specifically, the bulk of the film takes place in an unstable tangent universe that splinters off from its intelligent design. Donnie (Jake Gyllenhaal) suspects this designer is God, although it could as easily be some sort of cosmic predestination or, given what we have to work with here, the Easter Bunny. 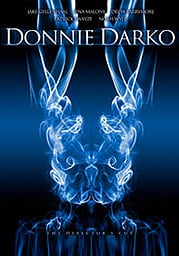 As a somnambulant teenage Donnie heeds the voices in his head and escapes being smooshed by a jet engine of unknown origins that crashes through his bedroom, Frank materializes and reveals to him that the world is going to end in 28 days. A problem child with a history of arson, Donnie is shaken from his normal routine of dinner table sniping and sarcasm about anti-psychotic medication, and he begins to connect the seemingly random dots like only a truly paranoiac can. The thing is − giant fright bunnies and chest-bursting aqueous phalli notwithstanding − much of what Donnie experiences isn’t a hallucination at all. The universe really does guide him toward superheroism, as his Frank-commanded busting of the high school’s water main and torching of the smarmy self-help charlatan Jim Cunningham’s (Patrick Swayze) mansion indeed prove to be necessary steps toward Donnie fulfilling his Messianic destiny. You see, despite little revelation of this framework in the actual movie, Donnie is a chosen one who must destroy the tangential universe in order to save the primary world from collapsing into black hole oblivion. To do this he’s imbued with psychic and telekinetic abilities not to mention the kind of super strength that allows one to bury an ax into the bronzed melon of a bulldog statue. But these details are outlined only in supplemental online materials and DVD extras, and onscreen we’re instead primarily left with teen melodrama, slow-motion sequences set to New Wave music (the inclusion of Echo and the Bunnymen is no coincidence) and snappy catchphrases including an earnest dialogue about Smurf sexuality that’s derivative of Kevin Smith.

The antagonists of this film take the form of the aforementioned jerk-off Cunningham and a puritanical health teacher Mrs. Farmer (Beth Grant). Their crime, as Donnie sees it, is in lumping “the entire spectrum of human emotion” into two polar extremes: fear and love (conveniently, Donnie’s arson also reveals Cunningham to have a fearsome love of kiddie porn). But as his universe-righting kismet comes into focus, Donnie finds himself following what he perceives to be “God’s channel,” thereby simplifying the world even further into a singularity in which one isn’t even free to choose between good and evil. Cunningham and Mrs. Farmer, specifically because they are laughably glib, are actually integral to the fulfillment of Donnie’s sacrificial fate. Moreover, by rebelling against their cheesy ideology in the tangential universe, Donnie is in effect giving himself over to the predestination of a universe in which even black-and-white options are too indulgent.

Why an intelligent designer of all that exists would entrust the fate of its universe to a 16-year-old heartthrob who lives in an insular suburbia is anyone’s guess, especially when accomplishing this objective requires the contrivance of unlikely circumstances aligning themselves perfectly. Donnie discovers Cunningham’s residence by picking up the man’s wallet directly outside his mansion. Donnie’s girlfriend (Jena Malone) somehow sleeps through 90 minutes of demon shrieking and chainsaws in a theatrical screening of The Evil Dead, allowing Donnie to do Frank’s bidding (while also conspicuously passing under a marquee for The Last Temptation of Christ). The definitive authority on the philosophy of time travel just happens to live a stone’s throw away. The cops don’t suspect Donnie of arson despite his calling Cunningham “the fucking Antichrist” in front of an auditorium full of people. And so on.

If everything is predetermined, you have to wonder why the universe split in the first place. Or why God, or whoever else is pulling the strings, would concoct such a needlessly elaborate series of events in order to right the ship, unless of course he simply likes fucking with us. But much like many religions and cults out there, Donnie Darko insists we abandon all logic. By so unrealistically siding with predestination over free will, Kelly tries to justify his own heavy directorial hand. Instead of exploring the infinite possibilities of parallel universes, Kelly is content to stick to just the two. Though he costumes his film as a mindbender, Kelly only gives us a flimsy teen comedy married to a daily devotional about everything happening for a reason. Despite talk by a demonic bunny rabbit about time travel and portals, Donnie Darko at its core is a Sunday school lesson about the inevitability of God’s plan triumphing over rogue phenomena and individual will. But hey, if you didn’t understand it the first time through, it must be genius, right?

Despite the film’s flaws, Cronenberg offers a cynical take on late capitalism, the pharmac…