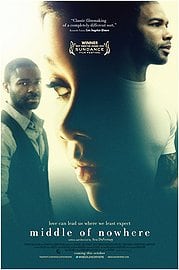 [xrr rating=4.0/5]Middle of Nowhere, the new film from writer-director Ava DuVernay, centers on a woman named Ruby (Emayatzy Corinealdi). She works hard at her job as a nurse, often putting in extra shifts to help chip away at old debts. She looks to her family – sister Rosie (Edwina Findley) and mother Ruth (Lorraine Toussaint) – for support, but they’re as likely to frustrate her as bolster her up. What really drives her, what keeps her going despite the obvious weariness that hangs on her, is the promise that her husband, Derek (Omari Hardwick), will soon get the chance to come home from prison. This is the extraordinary circumstance that colors Ruby’s otherwise mundane life, and DuVernay’s marvelously measured and nuanced film extracts all the poignancy possible from the distance between what her main character hopes for and what actually is.

Derek is in the midst of a prison sentence for an unspecified crime seemingly involving some stolen guns. Ruby visits him regularly, to a point where she’s developed specific kinships with other riders of the bus that journeys from Los Angeles to the penitentiary. She sits with Derek in the visitation room, talking about the parole hearing that’s coming up and the likelihood that he will be granted early release because he’s been doing “good time.” Derek cautions Ruby against getting her hopes up, a gesture that initially seems like a manifestation of the understandable cynicism that develops in someone who feels the system has been rigged against them. It eventually becomes clear that there are more complicated reasons for Derek’s reluctance to celebrating the possibility of pending freedom, and these reasons upend Ruby’s entire view of the compromised life she’s been struggling through.

This is potentially volatile material, but DuVernay wisely plays it cool. Middle of Nowhere is painstaking and thoughtful, favoring long, observational takes and scenes that play out with a minimum of fuss. DuVernay is interested in how people really interact, how they expose themselves deliberately and through their evasions. Ruth is a master of the latter, berating her daughters through a forlorn passive aggressiveness that helps explain how Ruby, a clearly intelligent woman, could have convinced herself to buy into Derek’s deceits in the first place. The unstated control that undergirded them were familiar, but they had a greater tug simply by coming from a place of husbandly affection rather than her mother’s self-sustaining disappointment. This attention to sound emotional detail carries through the entire film, including the scenes in which Ruby enters into a relationship with a bus driver named Brian (David Oyelowo), in part because it’s one of the only methods she can employ to give herself permission to step apart from her past.

DuVernay is meticulous in constructing the honest emotions of the piece, leaving it up to her actors to carry the weight of these lives, making them true and moving. That happens across the cast list, with Corinealdi turning in an especially deft and moving performance. It must have been tempting to play Ruby with broad strokes, explicitly conveying her tumultuous emotional ride. Instead, Corinealdi concentrates on the ways that Ruby internalizes her feelings, carrying the pain and even the hope she feels as a soft armor against the relentless battering of her unexpected journey. The performance shows the cracks that develop in the character but also the shimmering halo of strength that keeps her moving forward, even if it’s not precisely the trajectory she had in mind. Middle of Nowhere depicts the quiet devastation that can be exacted on an individual as punishment for the sin of believing in someone else. DuVernay and Corinealdi collaborate to make the perseverance that can eventually carry that individual through the darkest times equally evident.