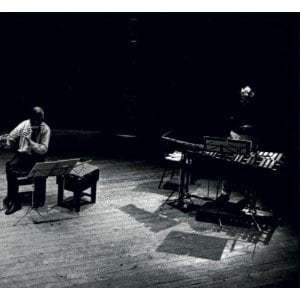 [xrr rating=3.75/5]Morton Feldman met John Cage by accident in early 1950, when he had just turned 24 years old. Both men had gone separately to hear the New York Philharmonic perform Anton Webern’s stringently atonal “Symphony, Op.21” (1927-8) but skipped out before being subjected to Rachmaninoff’s goopy romanticism. Running into each other in the lobby, they realized they were kindred spirits and thereafter became lifelong friends. Feldman moved into an apartment in Cage’s building and fell in with the musicians, artists and dancers that surrounded Cage, notably pianist David Tudor, composer Christian Wolff, choreographer Merce Cunningham and painters Mark Rothko and Robert Rauschenberg. Feldman, the big, loud (and straight) son of Jewish immigrants, could not have been more different that the austere (and gay) WASP, John Cage—yet, for a time, their mutual influence was profound.

Given “permission” by Cage to abandon conventional methodologies such as total serialism, Feldman began experimenting with graphic notation where pitch and rhythm were unspecified; this, in turn, prompted Cage to pursue pure chance elements in his composition. But Feldman was dissatisfied with this approach and soon returned to conventional notation to achieve his ends, which were also quite different from Cage’s. In marked contrast to his bearish physical appearance, Feldman’s music is, for the most part, quiet and contemplative with a vaguely tonal—at times downright sensuous—harmonic language very much out of step with the systematized (or indeterminate), dissonance of the day. Feldman lived in Cage’s shadow in the coming years, continuing to work a day job at his uncle’s garment factory in Queens until finally receiving an academic appointment at SUNY-Buffalo in 1972, a position he held until his death in 1987.

In the meantime, Feldman’s music continued to evolve in the ‘60s and ‘70s, mostly by getting longer and longer. While 20 minutes was generally the norm for an extended piece in the ‘50s, Feldman’s began to extend to a half-hour and beyond. By the ‘80s, he was composing chamber works monumental in scope: “For Christian Wolff” (1986) lasts over three hours, “For Philip Guston” (1984) over four and “String Quartet II” (1983) is an astonishing six hours without interruption, an almost inhuman feat of endurance for both performers and the audience. Feldman discovered the means by which he could construct such long pieces of music by close examination of the Near and Middle Eastern rugs he collected: observing the subtle variations in hue (called abrash) and the irregularities and imperfections in their patterning, Feldman began utilizing patterns of notes and phrases as the building blocks of these enormous edifices—but notating them in such a way that their exact repetition was nearly impossible or atomizing the instruments of the ensemble, which play their parts individually without reference to a unifying score. “Form is easy – just the division of things into parts,” he told the critic John Rockwell in 1985. “But scale is another matter. You have to have control of the piece – it requires a heightened kind of concentration. Before, my pieces were like objects; now, they’re like evolving things.” Indeed, Feldman’s music in his last period is not so much to be listened to as lived in, an all-encompassing sound-world suspended in real time.

Not surprisingly, performers willing and able to take on these works were few and far between. With their glacially slow tempo markings and dynamics ranging from very soft to nearly inaudible, convincing performances were rarely achieved. According to legend, he once stopped a young ensemble timidly rehearsing one of his scores by screaming, “It’s too fuckin’ loud, and it’s too fuckin’ fast!” But Feldman cultivated a group of musicians who would become his most reliable interpreters in his last years. Percussionist Jan Williams, pianist Nils Vigeland and flautist Eberhard Blum were recruited to move from Berlin to Buffalo to teach and form part of a loose-knit ensemble, “Morton Feldman & Soloists,” set up to perform his own works as well as works by other modern composers such as Erik Satie, Toru Takemitsu and Iannis Xenakis. Feldman wrote several of his last pieces especially for Williams, Vigeland and Blum, including “Why Patterns?” (1978) and “Crippled Symmetry” (1983) and they were responsible for the first (and, in some cases, the only) recordings of much of Feldman’s late works.

The “June in Buffalo” festival was established shortly after Feldman’s arrival at the University and continues to this day as the preeminent American festival of cutting-edge modern music. In 2000, the festival celebrated its 25th anniversary with a series of concerts devoted to Feldman’s compositions, where Williams, Vigeland and Blum reunited as “The Feldman Soloists” for a performance of “Crippled Symmetry” on June 12, 2000 at the University of Buffalo Art Gallery, the recording of which is now available from the Finnish label, Frozen Reeds. In his liner notes, Blum describes the concert as “one of the best performances that we had ever given together. The rare and indescribable ‘magic moment’ of occasion and ambience seems to have inspired us.” Now, twelve years later, this “most valuable sound document” can be heard by a wider audience.

At an hour-and-a-half, “Crippled Symmetry” is of only moderately lengthy duration compared to other works from this period, but it is still a physical and emotional challenge for the musicians. The ensemble is comprised of Blum on flutes (bass, alto and soprano); Williams on glockenspiel and vibraphone; and Vigeland on piano and celesta, arrayed across the stage “like a butterfly.” The title refers to its construction, consisting of a large variety of patterns notated separately for each instrument, coordinating only for the last few minutes of the composition. The symmetry either stated or implied by the various patterns is “disproportionate” or “crippled” by the absence of a synchronizing score, which results in performances that are always slightly different, with the three parts coming together in varying superimpositions. According to Blum, “Feldman compared this effect…with the unexpected impressions one receives when viewing a picture from different angles.” The performance “Crippled Symmetry” on this evening is riveting from beginning to end, unfolding at an appropriately leisurely pace with the instrumentalists demonstrating extraordinary control of the music’s irrational rhythms, exquisitely undifferentiated attacks and hushed dynamics.

Enlisting legendary mastering engineer Denis Blackham for Crippled Symmetry: at June in Buffalo shows that the upstart Frozen Reeds label is serious about sound quality. Blackham may be more famous for his work with Black Sabbath and other hard rock acts, but he also worked with Nimbus Records on their meticulously cut audiophile LPs in the ‘70s and ‘80s, so he knows his way around “classical” music as well as anybody. And he does a fantastic job with Feldman’s notoriously difficult-to-capture music, bringing out the instrumental details without squashing their delicate micro-dynamics and placing them in a vividly three-dimensional soundstage. This is not just the definitive performance of “Crippled Symmetry,” it is one of the best-sounding discs in Feldman’s ever-expanding discography. Moreover, with its lavish packaging, Crippled Symmetry: at June in Buffalo makes for the ideal introduction to this composer’s seemingly forbidding late works. In the hoopla surrounding the John Cage Centenary, it’s nice to see the too-often overlooked Morton Feldman getting some well-deserved love and attention. Bravo!