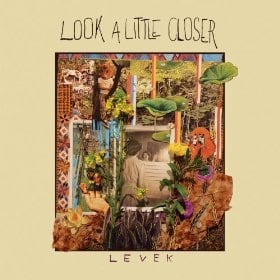 [xrr rating=2.25/5]Look a Little Closer is an example of what we might call pleasant but faceless music, the “indie” equivalent of elevator music. We might deny that such music is a product of our times, that every era had its forgettable musicians, and while the latter is probably true, there seems to be a new, more specific role that this music plays in the present era. On Look a Little Closer, Levek cycles through a series of genre influences, all of them de rigueur: the vaguely British-sounding pastoral psych-folk of “Canterbury Bell,” the jazzy funk of “Muscat Mingle” that so immediately recalls the 1970s, the whimsical Gallic pop telegraphed by the title of “French Lessons” and the loungey bossa nova of “Terra Treasures,” which colors inside the lines so well it could be a parody of itself. There’s a misplaced sincerity here that mistakes the mimic act’s desperation for good intentions and casual, no-stakes affection for respect. {Look a Little Closer} calls attention to the fact that its creator has studied well, and the problem is that Levek thinks this is a good thing when in fact it merely highlights his by-the-books ordinariness.

The album’s most twee songs (“With a Slow Burn” and “Black Mold Grow,” for instance) suffer the most because they hinge upon the affected and self-parodic. They also highlight Levek’s inability to write songs, which may simply be an unwillingness to sully his art with aspirations to accessibility, a notion held far too often these days. Look a Little Closer gets better during its second half, when Levek allows himself to get looser, playing with grooves and textures without the need for structures that obviously bore him — how else to describe someone who seems so utterly bored with the very idea of a song (which is a pretty amazing thing if you pause to think about it)? From “Muscat Mingle” through “Solemn Feeling Forever Healing,” Levek sounds freer, and there’s a more palpable sense of joy in the creation of music. These songs have a kinetic feel to them, as if exploring structures or traveling purposefully from one mood to another. They also sound out of place on an album that strives for eclecticism but sounds closer to two different sessions combined onto one disc, which sort of makes you feel like there’s something outdated about Look a Little Closer’s commitment to the album format.

If we are tempted to see this as a mishmash of styles with little cohesion, Levek’s choice of an album title would seem poised to dispute our reaction. But this strikes to the core of Levek’s unwarranted sense of self-importance. It sounds like he longs for the day — his music is certain backwards-looking in every way — when the album and the artist were venerated, when you would put on an LP (Look a Little Closer falls conveniently within that format’s 40-minute, more or less, capacity) and listen to it all the way through, studying its album art as you let yourself get lost in its world. This is a dream conjured up by music nerds like Levek himself, but it probably never existed in that way, and neither is it true that music fans don’t examine the art of today deeper when they are given a reason to do so.