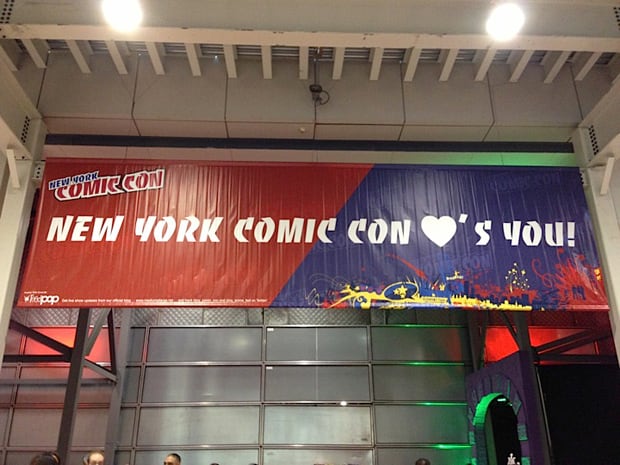 If your Tumblr feed has been swamped with more images of adults wearing tights in public than usual, that’s most likely because last week Manhattan’s Javits Center was alive with the seventh annual New York Comic Con. There’s something to be said for the evolution of comic book conventions from niche trade-shows into full-fledged mainstream pop culture events. Whether you chalk it up to the rise of the “nerd” in a post-Apple society or the ever-growing shared kinships stemming from social networking outlets, Comic Cons are where many of today’s hype-machines start and tomorrow’s sleeper hits drop anchor. I spent four straight days deep in the thick of all things Comic Con, and as the second biggest convention of its type, there was much to talk about. 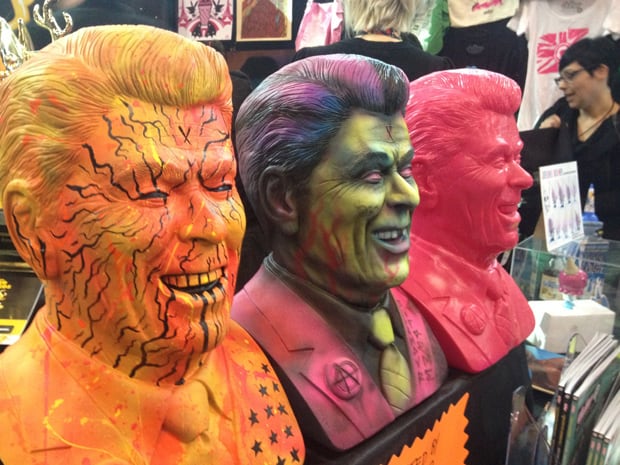 Unlike its big brother, the San Diego Comic Con, I was quite surprised to find how the core of the New York Comic Con truly seemed to be the comics. Film, television and video games were all well represented, but NYCC made it abundantly clear that comics came first. While there were some complaints that the convention’s Artist Alley section, where fans could meet and commission pieces from some of their favorite comic artists one-on-one, was held significantly out of the way from the Javits Center’s main show room, the care and detail given to this section made it far and away the most carefully laid out aspect of the entire weekend. Boasting over 300 talents, holding Artist Alley in the Center’s newly-renovated adjunct allowed for the most spacious, cosmetically pleasing and artistically fulfilling element of the weekend. 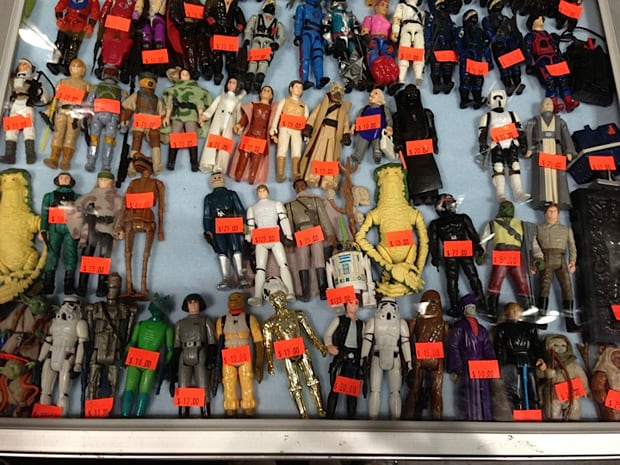 But the attention to comics doesn’t end there. Of the many panels I attended this year, the two most interesting were also the most comic-centric. Gay Marriage in Comics: Revolutionary or a Step Backward was a uniquely timely discussion regarding 2012 really being a big year for gay marriage in comics. With both X-Men member Northstar marrying his boyfriend Kyle as well as Archie Comics’ character Kevin Keller marrying his boyfriend Clay, the questions regarding whether this is a truly progressive step or just another comic book “event” was discussed, and ultimately decided that those two designations weren’t necessarily mutually exclusive. Life with Archie writer Paul Kupperberg described how, even in the face of declarations of boycotts from conservative groups, Archie retailers, including Toys R Us, didn’t even acknowledge the disruptive voices and stocked the issue as if it were any other. He also guided listeners through his process, or lack thereof, of writing two characters who were gay married as opposed to a heterosexual married couple. In a room that was by-far the most packed I attended, the discussion truly felt like we were at the epicenter of a historic moment in comics.

Also interesting was the Hip-Hop and Comics: Cultures Combining seminar. While I feared it was going to be a bad cultural studies thesis come to life, the panel of hip-hop luminaries (DMC of Run-DMC, Pete Rock, Jean Grae, Public Enemy DJ Johnny “Juice” Rosado) as well as comic writers heavily involved with and inspired by hip-hop, kept things largely anecdotal about comics’ influence on their work, resulting in an hour that was wholly entertaining. From DMC explaining coming up with DJ Jam-Master Jay’s name by writing him a Marvel Saturday Morning Cartoon-style theme song (which eventually became the “J-A-Y are the letters of his name…” routine on their debut album) to Rosado’s likening his scratching and bombastic production work to emulating his favorite comic fight scenes, it provided a unique look at where these iconic artists found inspiration. Also interesting were mentions of the first appearances of graffiti and breakdancing in mainstream comics, as well as the stigma faced by black comic writers for having their work constantly labeled “It’s Hip-Hop Meets…” by critics. 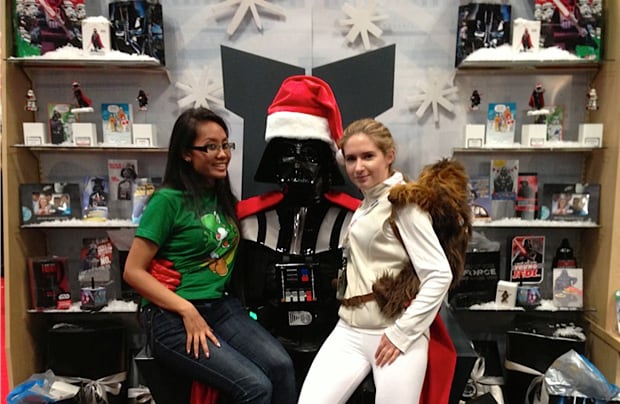 But in terms of the overall culture of Comic Con, there is something troublesome and borderline exploitive about the “Special Guest” autograph sections. With celebrities at tables scattered throughout the show room and NYCC’s designated designer area called “The Block,” as well as the bigger names given their own table in the large basement autograph hallway that some affectionately, unofficially refer to as “the Auto-Zone,” stars of yesterday and today sit at booths where they sell glossy 8 X 10 photos (which I’m fine with) but then charge absurd amounts for fans looking for their signature on items from home or even for a picture on the fans’ own camera. I’m not knocking the fanbase willing to stand in line for hours to briefly talk to their heroes, nor am I mocking a cult figure for making a living from catering to their existing audience, but there’s something incredibly sleazy about Lou Ferrigno charging 40 dollars to write his name on one of your possessions. That said, there were some stars friendly enough not to charge for their signature or for a picture, most notably Troma Studios’ The Toxic Avenger director Lloyd Kaufman, who spent hours talking to every fan who approached him, even during Troma’s chaotic attention-grabbing zombie march that Saturday. 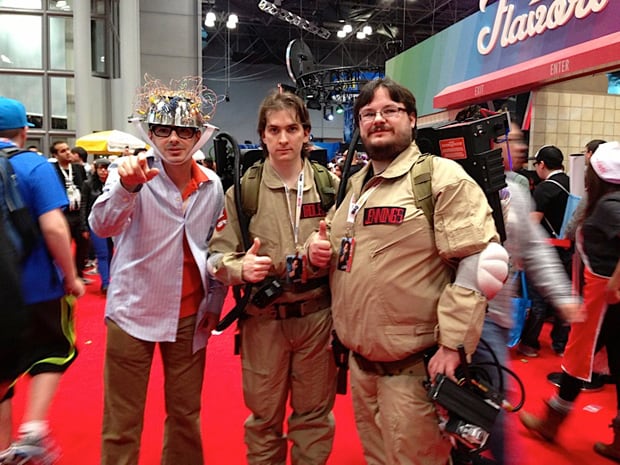 Yet the most memorable, and honestly admirable, aspect of the convention was the costumed masses in attendance. The self-confidence required for people to dress up, even outside their own body type, to resemble their favorite characters is pretty astounding. But even more fascinating than the act of actually decorating oneself as an alien/transformer/hedgehog/ninja/unicorn in public, is witnessing the obvious instant camaraderie. With so many passionate fandoms from all over the world sharing the same confined space, the closest thing to a fight I heard all weekend was when the couple on a blind date (“Scarlett Witch” and “Ash Ketchum” respectively) standing behind me at an ATM escalated a discussion on The Dark Knight vs. Iron Man into a heated debate on the merits of Robert Downey Jr. vs. Christian Bale. Just when it seemed like their romantic outing was going to combust, “Captain Jack Sparrow” moseyed over to diffuse the tension and take some fun pictures.

This same enthusiasm was felt when I overheard a new up-and-coming independent comic author selling an interested party on his series about “the world’s greatest pillow collector.” (“He has over 300 pillows, and he fights monsters.”) It’s hard not to get caught up in the infectious good vibes. I was surprised to find myself, while waiting in-line for a public big screen sing-a-long screening of R. Kelly’s entire Trapped in the Closet series, joining in with a fun crowd’s litany of niche-centric chants. From a call-and-response “What do we want?” “Time travel!” “When do we want it?” “That’s irrelevant!” to the choir of baritone “Yums” every time one person said “Red Robin,” to even a dueling Daniel Bryan “Yes!”/ “No!” chant, every aspect of vocal fandom seemed loudly represented. It’s precisely that coming-together of all facets of niche-interests under one roof united by passion that made the experience of the 2012 New York Comic Con truly priceless. Well, that, and the fact that I didn’t ask anybody for their signature.