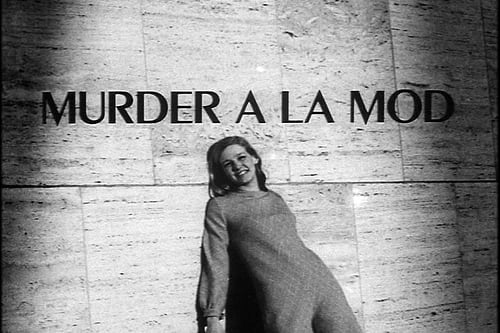 Every filmmaker starts somewhere. For some, it’s fetching coffee in a demeaning internship. For others, it’s enrolling in film school and watching endless reels of Godard and Meshes of the Afternoon. For many of the New Hollywood generation of auteurs, it was serving in the large-breasted salt mines of Roger Corman’s exploitation empire. Brian De Palma, despite generally being counted a leading member of that wave of American filmmakers, took a more circuitous route. He began studying physics at Columbia University and then switched to theatre at Sarah Lawrence College. After making a few short films and striking up a friendship with the then unknown Robert De Niro, he began a career in documentaries, slowly building a name in the Greenwich Village film scene. Then came his first feature film: Murder à la Mod.

Though he’d been involved in aspects of various films prior, Murder à la Mod was his true auteur breakthrough, in the sense that he both wrote and directed it. In another sense, it’s barely a De Palma film at all. Throughout the movie, the director wears his influences so on his sleeve that it’s possible to view it as an 80 minute long pastiche. Some of it is almost comically overt, and indeed, Murder à la Mod borders on extremely black comedy at times. Other references are relatively restrained, but the film clearly demonstrates a filmmaker who is unafraid to claim the tropes of gory thrillers as a primary ancestor. 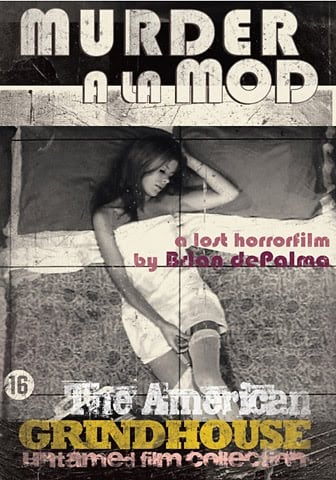 As puns go, the title is passable. Both referring to the term “à la mode” (that is to say, in a style) and the rapidly declining Mod fashion, it’s practically a Rosetta stone to understanding De Palma, at least at this early stage in his career. It’s playful, yet dark; moreover, it emphasizes style over substance, at least in the sense that the wordplay is in the style, not in the murder. Throughout his career, De Palma has been accused of favoring style over more concrete concerns, and that’s certainly true here. Not to say that Murder à la Mod is all sizzle and no steak, but the film is undeniably more concerned with structure, technique and reference than it is with character or story. This doesn’t make it a bad film, but it certainly makes it obvious where the director’s intentions lie.

Murder à la Mod opens with a series of still images, photographs of a young blonde girl. It turns out that this is a project by Chris (Jared Martin), a talented but tempestuous photographer. The idea is that by documenting his girlfriend Karen (Margo Norton) in all facets of her life he can create a “photobiography” of a person. The aesthetic concept behind this is a little dubious, but the still photos swiftly turn into a low-angle shot of a girl, face unseen, posing in a photographer’s studio while expressing her misgivings at nude modeling, only wanting to do it to get enough money to help the unseen photographer divorce his wife. Then suddenly, a razor appears and slits her throat.

It’s a burst of violence that shocks for just a moment, because the POV switches to yet another camera shot, this time of a series of mid-shots of young women posing for a camera and repeating the same, now clearly scripted lines about misgivings and divorce. From there, revealing too much of the plot would ruin the point of the film, but suffice it to say: Chris has been making low rent skin films with the creepy prankster Otto (William Finley) and creepy producer Wiley (Ken Burrows), and Karen’s upper crust friend Tracy (Andra Akers) is right to have some misgivings about her perfect new boyfriend. There’s more murder. There’s a complex switcheroo involving a fake ice pick and a real, very sharp one. There’s a very large, suspicious trunk on wheels, just large enough to hold a body. But more than that, Murder à la Mod’s actual plot is so simple that delineating it would make it sound dull. It’s De Palma’s techniques that make it anything more than a simple slasher film.

And that’s where an accusation of style over substance has some actual weight. The director employs an experimental (for 1968) non-linear structure that adds complexity to the straightforward plot. He spends enough time showing the action through the medium of a camera within the actual camera to displace a viewer’s perceptions and comment on the distancing effect of film(though not particularly subtly).”. He includes an extended dialogue between Chris and Karen that can be read as a bitch slap to the notion that trash (like, say, a gory thriller) is demeaning to the sensibilities of a true artiste. Not all of it is entirely successful. He uses a rapid, jerky editing that often comes across more as an indulgence than a necessity (as is typical of a filmmaker stretching his abilities for the first time), and bewilderingly chooses to have one character’s dialogue entirely in voiceover for no apparent reason. Then there’s an homage to Psycho that’s so deliberate that to view it as a reference or a rip off is entirely in the eye of the beholder.

Murder à la Mod was originally shown only in one theater in New York City and then disappeared from public view for decades, becoming an early oddity in a filmmaker with an oeuvre full of them. In 2006, it was re-released and has, well, remained an early oddity of De Palma’s, but it’s not less of a film for that. In fact, it’s a rare film that feels exactly like what it is: the work of a promising novice filmmaker telegraphing his later intentions with incredible precision. It’s never going to be considered one of De Palma’s great films, but it shows the road he was headed down more clearly than any.