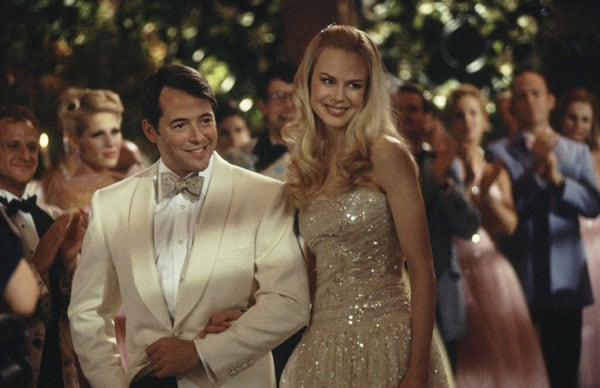 The mid-‘70s were a strange and confusing time in America. The political climate was partisan and heavily divided after an extended ground war in a far-off land. Gender relations had changed, and women’s rights in the home and workplace were hotly debated. In other words, things don’t change much. Writer Ira Levin, who had already experienced cinematic success with Roman Polanski’s adaptation of his novel Rosemary’s Baby (1967), tapped into the social struggle between men and women and coined a term that would become shorthand for a particular kind of woman: a Stepford Wife. The Stepford Wives was first made into a film in 1975, and while it was a middling success, it spun off a series of sequels and the premise entered pop culture on a surprising scale.

And why not? The idea behind The Stepford Wives is just far enough beyond reality to entertain and just plausible enough to make anyone squirm. In Connecticut, there’s a perfect little town named Stepford. The men are all successful, somewhat boorish businessmen with specialties in many fields, including voice identification, art and animatronics. Their wives are all beautiful, soft-spoken women who enjoy housework and making their men happy. Everything is peaceful, and social engagements involve a lot of barbecues and small talk. There’s only one catch: the women have all been killed and replaced by submissive robots that mimic their appearance and speech. But the wives don’t act like their original selves; they act like men want them to act. 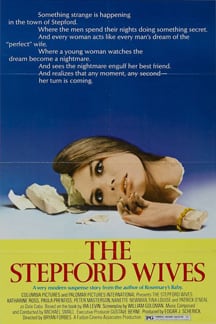 As written for the screen by William Goldman and directed by Bryan Forbes, the 1975 version of The Stepford Wives strikes an unnerving chord. In a time when men long accustomed to complete dominance in the workplace and home perceived themselves as losing ground to a new wave of feminism, it’s not entirely implausible that some would be desperate enough to try to regain control through horrible means. If you think that murdering women and replacing them with more compliant versions of themselves is farfetched, you haven’t studied history much. What’s more remarkable about The Stepford Wives is how patient the film is. Unlike many other thrillers, it has almost no shock moments, at least until the climax. The film begins with its heroine Joanna (Katharine Ross) in an empty apartment in New York City, about to move to Stepford with her husband Walter (Peter Masterson) and their two small children. As they wait in the car, a young man carries a mannequin across the street and Joanna takes pictures. It’s a telling moment, and one that might be a little too on the nose if the film didn’t move so deliberately to its awful conclusion.

You could even say the 1975 version moves slowly, but it closely mirrors Joanna’s gradual suspicions of the town’s women (who are all revealed to have been highly successful, feminist women until they moved to Stepford). If anything, the film pushes against the credulity of its own premise, with the idea of robotic duplicates being treated by the men of the town as so ridiculous that it beggars belief. It’s a cunning trick, and by repeatedly forcing the viewer to hear how impossible it would be, it makes the final reveal of a blank-eyed Joanna duplicate threateningly closing in on the real woman that much more terrifying. Much like Rosemary’s Baby, the bulk of the film is Joanna growing more and more desperate and terrified by what’s happening around her, but the reality is too much to bear, particularly when it’s denied at all turns. 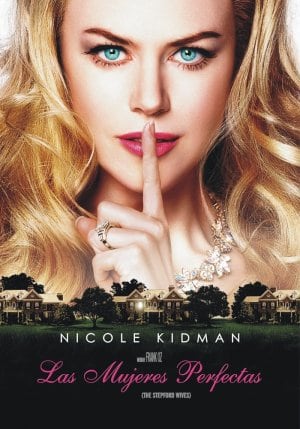 And then there’s the 2004 remake, helmed by Frank Oz and Nicole Kidman. Whoo. The production of the film was hampered by infighting and script rewrites, which are highly visible in the finished product. The remake was savaged by critics and ended up a box office bomb. But even worse, it was a comedy. Yes, the people behind the 2004 version of The Stepford Wives saw a story about violence against women and an unthinkable backlash to feminism and thought: let’s make this funny. Now, to be fair, any version of The Stepford Wives can be thought of as a very dark satire of gender relations. But the 2004 version went whole hog on that concept, bringing in CGI robotic dogs, Christopher Walken doing his thing and remote controls that don’t even make sense. Then they decided to throw in Jon Lovitz at his douchiest in a prominent supporting role, an over-the-top gay sidekick and a last minute twist that completely invalidates the entire point of the movie.

All of this is unfortunate, because there was at least the possibility that the remake could have been good. The cast was consistently solid, also including Glenn Close, Matthew Broderick and Bette Midler. The story by itself is still as relevant as it was in the 1970s, or at least the debate about women’s rights hasn’t become any less heated. But the 2004 version is a damaged film. There are so many plot holes that trying to list them all would be fruitless, but here’s a damning example: in the original, the women were replaced wholesale by robotic duplicates. In the remake, they’re controlled by implanted microchips (that also give them super strength and flame retardant abilities for some reason). And yet, near the end of the film, Kidman’s Joanna is confronted with a blank-eyed robot made in her image. Why? If the men of Stepford are going to simply control her brain, why make a robot version of her? Sadly there’s not an answer, just bad writing and a desperate hope that by aping a famous scene from the original, they’ll be able to retain the viewer’s interest. Not to mention the climactic reversal that turns out Close’s character has been behind the whole thing, in a reveal that can be summed up as “bitches be crazy.”

The 1975 Stepford Wives isn’t a perfect movie, but it is a powerful one. It catches onto the fears that simmer under any gender conflict and takes them to an extreme, while still allowing Joanna and Walter to be people. It’s telling that even when it’s implied Walter has agreed to let Joanna be changed, he reacts with tears and un-acted upon remorse. By contrast, the 2004 Stepford Wives is a flashy cartoon, poorly structured and completely missing its own point. If anything, the filmmaking works as more of a cautionary tale than the actual story.