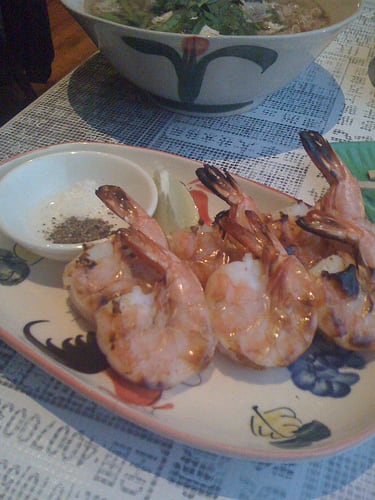 Andy Ricker is a legend in Portland at this point. Several years ago, he started the now-infamous Pok Pok Thai restaurant that is now so crowded that they were able to open a second bar just for people who are waiting to get into the place and capitalize on that. I’m not all that keen on the wait and the inherent cost that it creates in my pocketbook and my watch. So, when I find spin-off places, I eat them up. Ping is one of many of Ricker’s spin-off joints. This small, urban, street-food-inspired restaurant is off the main foodie path. It sits in the dilapidated Old Town/Chinatown area of Portland, a place more known for its homeless, drug dealers and frat nightclub scene than for its culinary offerings. It is on the street level of the historic Hung Far Low building, which was a 1920s Chinese restaurant that evacuated the seedy area somewhere around 2002. And although I diss the neighborhood, it isn’t unsafe to be in and this place is a worth the trip.

Like all of Ricker’s restaurants, it offers a clean, cozy, well-designed interior. This is a long space with an open kitchen, distressed wood on the wall for character and a bewildering assortment of Thai kitsch. The windows are sandblasted to opacity so you don’t have to look at the riff-raff outside while you’re eating.

This last time I went to Ping, I went for lunch with a fellow foodie. What I love about this place is that it is no-holds-barred Thai. The menu items are written using the Thai names for the dishes with English explanations. Most of the time, it is really hard to pick because all of it sounds really good. This day was no different.

First off: tea. Ping has some really quality tea, served in a nice little teapot ($3.50/pot). Its quality accompanies any lunch well. I informed my friend about the drinking vinegars, but she didn’t bite. Ricker’s restaurants carry drinking vinegar ($4), which are daring mixes of sweet, sour and bubbly that add a unique flair to your meal (think Italian soda, minus the disgusting sweetness and insipid normality). Flavored with everything from pear to red potato to the special of the day, these are something not to be missed (nor underestimated). Also, if you’re not feeling that, the Naam Krachiap ($3.50) is a delicious hibiscus drink that is less pucker-inducing.

Next up, snacks. I’m practically a professional snacker. In fact, I’m one of those people that prefers a dinner of appetizers rather than a full meal. This is no different. We started with the tea egg ($2.50). For those that don’t know about this, it is wonderful—take a hard-boiled egg, crack the shell by rolling it around and marinate it for a day in soy sauce, lapsang souchang tea (that’s the pine-smoked variety), some anise and cinnamon. What you get is a beautifully marbled egg white and a deliciously salty and smoky egg. My wife makes these at home, and Ping’s rivaled it. Dip this in a rice-vinegar/soy sauce mixture and you have the beginnings of a fine meal.

The satay plate (chicken, beef, and lamb on sticks with cucumber relish and a coconut milk-based Malaysian-style peanut sauce; $12) is tasty; the meat is seared well, but it’s a bit skimpy. The star of this appetizer is the peanut sauce with its savory, Malaysian spice mixture. Ping’s dinner menu is rife with satay; all of it is good, but it is all a touch pricey for the amount of meat you get.

The house-roasted peanuts ($2) on the other hand are marvelous deal and something I always order. There’s something to be said for fresh peanuts and bits of lime leaf, fried garlic, sea salt and flakes of chili. It is also a decent palate cleanser. It adds to the fun of a meal, too, when you’re using chopsticks (maybe that’s where this place got its name!).

The Ju Pa Bao is a hearty, Tails and Trotters (that’s a local ranch) fatty piece of pork loin in a little roll; it is almost like a slider. This has a great texture, soft and a touch greasy with a hint of salt. At $8, this isn’t the cheapest locally-produced slider you can get, but it is simple and unlike much else available and it was completely shareable, especially since the server gave us a little steak knife to cut it with.

The killer app of this meal was the noodle bowl. I’m, admittedly, a fan of noodles, but Ping takes it to another level. The Baa Mii Tom Yam Muu Haeng ($10) is exactly what you’d expect from its name (what? You don’t speak Thai?): a large bowl heaped with “dry” egg noodles (no sauce), ground pork (for coarse texture), pork balls (for soft texture), cracklings, peanuts, fried garlic, bean sprouts, long beans (all contributing to crunch!), chili vinegar (spicy, sour), pickled radish (sour, crunch), chili powder (spice), and fish sauce (salty, fishy). On the side: chicken broth.

I served up my friend with the first bits, awkwardly shoveling in noodles, sauce and vegetables into her little bowl with a metal soup spoon. At the bottom was marinated, ground pork and a bit of that orangey, spicy vinegar mixture I now love so much. I then piled myself up a bowl. Note: Ping does this right arranging everything upside down so that you get the bottom of the serving bowl on top of your serving bowl. As I consumed the perfectly cooked noodles, the grainy ground pork and veggies colluded to provide me an unexpected punch of sour, salty, and spicy. I dove in again, this time getting a touch of a Thai bird chili (delicately sliced so as not to totally blow you away) shooting that burning air up into my sinus cavity. I washed this down with a sip of chicken broth, stifling my sneeze and soothing my tongue with its comforting, rich aroma. “Yeah, I’d eat this again…” I said.

“Are you kidding me? This is amazing,” said my partner, mid chomp.

We laid waste to that noodle bowl and finished everything off with shared sips of the broth. I threw in peanuts between glorious bites.

“Are you still hungry?”

“Well, not hungry but…,” I responded.

Fresh spring rolls are nothing like the packaged, horrible travesty that so many are accustomed to at many Chinese restaurants. These Vietnamese-style, rice-wrapped rolls are filled with tree-ear mushroom, pork, shrimp, glass noodles and carrot. It is served with the typical Vietnamese accompaniment of Nuoc Cham: lettuce, pickled carrot and radish, Thai basil. We grabbed these little guys and wrapped them in the fresh, cold, crunchy lettuce, creating a buffer for our fingers versus the hot, fried goodness inside. This is a punchy way to finish the meal, but generally, this should be ordered first.

Ping delivers a different kind of Thai. There is no Evil Jungle Prince here; to Ricker’s restaurants, that’s tired, played out and completely unnecessary. Don’t get me wrong, I love Pad Si Ewe like the next guy, but if I’m looking to show off Portland, this is a place I’ll take someone to. While it doesn’t cater to vegetarianism like most places in Portland, the veggie items are all flavorful and not toned down, meatless versions of something that should have meat in it. Ping celebrates Thai food and is utterly authentic about what it doles out.

I can’t always afford Ping… it’s not every day that I can blow $25 on lunch. But for something special or for a tasty, light meal, you can count on its innovative approach to Thai.