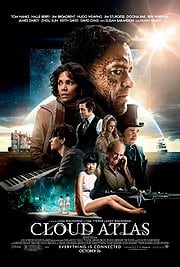 [xrr rating=4.75/5]Cloud Atlas, the collaboration between Andy and Lana Wachowski and Tom Tykwer, is a movie starkly out of step with its time, which makes sense, after all, for a film about transcending one’s historical existence. It’s a collection of six stories, and taken together, they resemble a fable or parable, at once utterly original yet deeply familiar. Its message is simple, like a nugget of raw knowledge, but the extrapolations one may make from it are endless, and it embodies a preternatural resistance to cynicism. The performances belong to another era as well, exhibiting a pre-modernist, rather populist theatricality, suited to the film’s deeply committed romanticism, which wafts with a pleasantly old-fashioned air. Tom Hanks, one of the few Hollywood actors who can pull off this manner of utterly unpretentious showmanship, is the perfect avatar for a film that so nakedly wears its heart on its sleeve. Most daring of all, some of the cast play characters who differ in race and gender from their own, a potential obstacle for those who fail to see the filmmakers’ intent. In short, Cloud Atlas is not fashionable, but it is quite remarkable, a deeply personal independent film, made with a budget of over $100 million and the explicit intent to make a true work of art by a group of filmmakers that includes the most visible transgender director to ever make a feature film. It’s astounding that this film even exists.

Adapted from a novel by David Mitchell that many thought would forever resist adaptation, Cloud Atlas is a metaphysical inquiry into human interrelationality, made in an era mostly resistant to metaphysics. Its six stories are woven together seamlessly through cross-cutting that adds a new dimension to the innovations of D.W. Griffith: a cut from one shot to the next can leap not just from one location in space to another but across historical eras, as Griffith did in his own Intolerance (Cloud Atlas’ clearest forerunner), but instead of alternating between sequences in thick chunks of time, Cloud Atlas pivots between centuries with such agility that slivers of experience, separated by generations, criss-cross one another rapidly and spontaneously, a free play of temporal events highlighting unforeseen interconnections and generating new, multiplicative meanings at an exponential pace. The camera here serves as a telescope peering through time: one scene might end with a character announcing his departure, with a cut bringing us decades into the future to show us the beginning of another voyage, landing on the image of a train, for instance.

Taken by themselves, the stories may be of only moderate interest, though their simplicity and universalist tone make them feel aphoristic, suggestive of meanings beyond their borders, such as the way a recurring reference to the “natural order,” used by bigots of every era, highlights the persistence of intolerance despite the appearance of progress. We are unsurprised to see the phrase used in the 19th century to support the institution of slavery, but when we hear it again in a story set in decades in the future of our own, we might question our own self-satisfaction with the progress we have made. It’s also true that the visual style of Tykwer and the Wachowskis is rarely stunning in and of itself. The visual palette of Cloud Atlas might be seen as a disappointment after the Wachowskis’ groundbreaking masterpiece of the digital image, 2008’s Speed Racer. In depicting a future world where clones provide a steady supply of enslaved labor power for the service industries, Cloud Atlas recalls the sharp, iconic pop-art style of The Matrix, but scenes set in a more familiar world often pop but rarely impress in isolation. And that’s because they don’t really need to: the straightforward, bold legibility of its images ensures a steady foundation for Cloud Atlas’ most significant achievement, which occurs through editing, the creation of relationships between these images. The film derives its astounding measure of meaning from its temporal intersections, and it expands ever outwards in three dimensions as each storyline generates new points of interconnection with all the others.

In one scene, for instance, we hear a woman, or rather a synthetically engineered replicant clone named Sonmi-451 (Doona Bae), express her undying devotion to her recently deceased lover (Jim Sturgess), just before she is to be executed, and the film flashes back all the way to its earliest story, showing us a man who has just returned home to his wife after a long voyage. These scenes are potentially affecting in and of themselves, but it is what’s implied in the cut, the leap, from one back in time to the other, that makes this moment truly resonate: the lovers in both scenes are played by the same actor and actress, so the cut stitches together these two pairs of souls, the uniting of one couple in turn healing the pain of permanent separation experienced by the other. The effect is thrilling and new, something perhaps never witnessed ever before in cinema on this scale, and despite the film’s significant dept to its literary origins, this is a decidedly cinematic effect: it is because we identify these individuals with their actors’ bodies first and foremost—this is true even when the characters are under makeup and prosthetics, as they frequently are—that we draw links between these characters that function quite differently than anything literature can achieve.

The romanticism of this reunion of lovers is central to Cloud Atlas’ aims, but the film is not limited to the merely amorous dimension of interpersonal connection. Many will interpret the film rather simplistically as a well-intentioned plea for equality and against oppression, linking the racism of the slave-owning era to the impersonal destructiveness of rampant capitalism all the way to a future world where clones live a monstrous existence as machine-like servants, even more completely dehumanized than slaves. But Cloud Atlas concerns itself with a more elemental dimension of human interrelationality, embodied in the deeply moving relationship between a wealthy white man (the lover attempting to return home from his voyage, played by the aforementioned Sturgess) and a slave (David Gyasi) who become friends simply because the former looks the latter directly in the eye, a moment that is characteristic of the film in being simultaneously small and momentous. Far from a trite, sentimental plot point, this connection is one of the many moments that links Cloud Atlas with such philosophers as Martin Buber and Emmanuel Levinas, who emphasized the transcendent ethical duty that flows out of the direct, face-to-face meeting of two individuals, and the film unites these small acts wherein characters acknowledge each other’s humanity with monumental consequences by, for instance, having Sturgess play not only a man willing to recognize a slave as his equal but also the future leader of a rebellion against oppression. The relationship between the varied characters each actor plays is never made clear—is it a kind of reincarnation or merely some form of synchronicity like the butterfly effect?—but Cloud Atlas is greater for leaving these interconnections mysterious, more poetic than explanatory.

The stories of Cloud Atlas are variations on this theme of interpersonal responsibility, exploring the foundations of our ethical commitment to the other, each story bringing all the others into multiple and varied points of focus. As such, it is a deeply metaphysical, even religious film (“re-ligio” as the retying of a bond): more than a few times, Cloud Atlas recalls the Jewish teaching that to destroy or save one life is like destroying or saving the whole world. Instead of favoring contemporary liberalism’s view of history as rational progress along a linear path, Cloud Atlas identifies a continual resurfacing of our fundamental ethical challenge in the cyclical dilation and contraction of our capacity for openness and responsiveness. Correspondingly, the way Tykwer and the Wachowskis modulate the film’s tone from story to story compresses and expands the scale of humanity like an accordion. A tale of an old man (Jim Broadbent as Timothy Cavendish, an initially self-involved literary publisher) escaping from a retirement home attains a mock-grandeur the places it on the same level as another story about the fate of humankind. There is also the beautiful, tender love story of composer Robert Frobisher (Ben Whishaw) and Rufus Sixsmith (James D’Arcy), which places the romantic dimension of relationality on equal footing with the more heroic aspects of the other stories. That all of these are equal suggests not that all actions or fates are the same but that each movement towards the humanistic ideal embodied by the film is momentous in and of itself, in whatever form it takes. Like any parable, Cloud Atlas’ core is shockingly simple, but the depth of the ethical world it constructs, connecting actions separated by decades and centuries, is nothing short of ennobling in its massive scope.