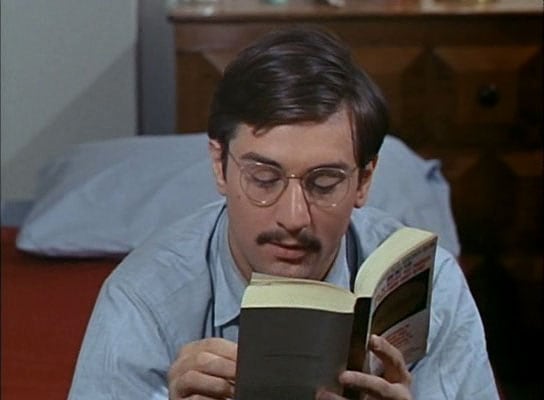 Brian De Palma’s Greetings, a satirical late ‘60s buddy flick, features comedy that is rarely funny and hijinks that are often joyless. Greetings was the film that introduced De Palma to the wider cinematic world, however, though in truth it is more curio than film, a series of filmic references and visual puns crammed into 8,000 feet of film for no discernible reason. These references are so dense that the film plays like a laundry list of bona fides meant to establish De Palma’s cinematic street cred, and given many of the reviews at the time, Greetings did just that, amusing critics who were just happy to see a filmmaker reference HUAC or skewer the glam of the late ‘60s ultra-mod lifestyle.

And indeed, satirizing Antonioni’s Blow-Up by mashing it with real-world Kennedy assassination conspiracy theory was a remarkably clever idea, and it’s in this plot line that we see true flashes of the glossy, obsessive De Palma of the late 1970s and early 1980s. This tale of three New York 20-something men is primarily focused on Paul (Jonathan Warden) avoiding the draft, though his friend Lloyd (Gerrit Graham) has already scammed his way out of Vietnam, affording him time to obsess over all things JFK. The dark comedy of his descent into full-blown whackaloon conspiracist gives the young De Palma a platform for his own preoccupation with the strange. Lloyd’s life is a series of uncomfortable moments just vague enough to give the audience a sense of unease that Lloyd himself never feels. 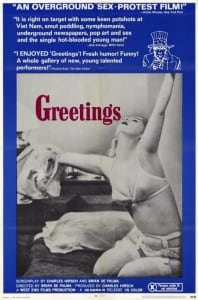 Meanwhile Jon, played by a young and suspiciously relaxed Robert De Niro, also trying to avoid the war, acts as cinematic surrogate for De Palma. After a clumsy scene of De Niro reading passages from a psychology book straight into the camera — similar to the faux medical information presented in 1930s exploitation films to give them a hint of propriety, but far less entertaining — we arrive at the one truly fascinating moment in Greetings. Jon has tricked a woman into his apartment on the false presence of an important art project. Framed by a dark rectangle mimicking a window, she undresses as we hear the whir of the camera and Jon’s desperate direction. It’s a remarkable scene where De Palma shows us who he is, or at least who he thinks he is, at that moment: A voyeur and opportunist, a cheat and a fraud, and he loves every resultant frame of it.

Unfortunately, a few remarkable moments fail to sustain the entire film. Greetings is clearly intended as laugh-out-loud satire via the primary story line involving Paul and his futile attempts to get laid after faking out the draft board. The film opens with Paul shouting racial epithets in a bar, hoping to be injured and avoid the draft. When that fails, he goes to Jon and Lloyd for advice, and the pair proceed to coach him on how to “act like a fag” and spout deliberately offensive, racist conspiracies. That the deliberate attempts to offend are less offensive than their everyday bigoted language is a clever point, though so belabored that it telegraphs one of the few effective punch lines in the film.

Paul’s plot is the weakest of the three. His sexually incomplete encounters with women are likely an attempt at irony, implying that someone who feigned homosexuality to get out of the draft may actually be closeted. If any message was intended, however dubious, it was cast aside, replaced with De Palma’s desire to showcase full-frontal female nudity throughout. That nudity and sexual content certainly garnered Greetings a publicity-getting X rating, though, the first such rating issued by the MPAA.

As meaningless as most of the film is, Greetings was, in some respects, intended to be meaningless. Humor through absurdity and non sequitur was a popular trend in B-movies and indie films of the late 1960s, even in a few failed Hollywood projects like The Maltese Bippy (1969) or Skidoo (1968). De Palma’s attempt to work within this style seems forced, though; a series of wacky locations like the Bronx Zoo and public bathrooms, a peppy-poppy theme song and sitcom hijinks are meant to be spontaneous but instead feel like pandering, making it impossible for the film to completely shake off its commercial pretensions, no matter how much it wants to.

Yet despite this, there is an exuberance in Greetings, an unwavering love of cinema and thrillers that undeniably identifies this as a De Palma film. He may steal editing tricks from Godard, plots from Antonioni, sexual escapades from Glen or Glenda and fast-motion whimsy from Richard Lester, but it is a step toward the collage-homage of his later, more mature films. The moments that feature De Palma’s burgeoning interest in voyeurism and his own confidence, rather than mimicry, are the moments that make Greetings worthwhile.