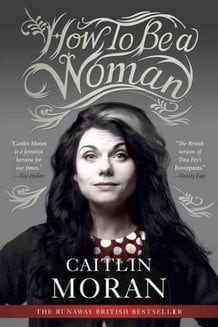 [xrr rating=4.25/5]If you wanted to be particularly cynical, you could say that Caitlin Moran’s How to Be a Woman stumbled into notoriety due to its release date, that the success of her autobiographical feminist tale is more about “right place, right time” than it is about meaningful examination of the cultural zeitgeist. Certainly, there have been a handful of detractors that have said such things about the book, but such cases merely invoke those unstable straw men. The relevance and timeliness of the content tackled within How to Be a Woman is a tribute to Moran’s ability to survey the cultural landscape and deconstruct the rhetoric meant to service power structures that keep feminist voices silent.

For those looking for an introduction to historical feminist thought, or a breath of fresh air injected into modern feminism, How to Be a Woman is an accessible and compelling blend of academic feminist theory and more straightforward autobiographical prose. Chapter by chapter, Moran takes us from her 13th birthday through to the present day, touching on moments throughout her life that have influenced how she viewed herself as a woman and feminist. All the predictable moments are there: her first period; the first time she purchases a bra; her insecurities about being fat; her first recognition of workplace sexism while at Melody Maker – “Some sexism is happening at me!” as Moran puts it. While each chapter’s title evokes a set of rom-com clichés, she spends the ensuing pages deconstructing perceived, mainstream notions of “growing up female”; Stephen Colbert would applaud her dedication to truthiness. Therefore, How to Be a Woman is not interested in crafting a predictable tale of female empowerment, an underdog story of a girl turning into a woman. Instead, Moran is interested in taking smaller moments from her own life and weaving a larger cultural fabric.

Each chapter is not only a hilarious, witty and poignant examining of Moran’s own adolescence, but also a larger deconstruction of the present culture, one where women are still struggling with many of the same issues that the first wave of feminists were fighting against. As Moran sees it though, the main issue isn’t that women have left the fight, but rather that “feminism” and “feminist” have become dirty words. Certain power structures – mainly the mainstream media – have contributed to the 21st century view of a “feminist” as someone vigilantly anti-man, endlessly bitchy and out of touch with the issues of today. There’s a suggestion that many young women today think that the need for feminism has long since passed, that once they got the vote and a job, feminism was to be tucked away. But in a year when Planned Parenthood threatens to be defunded, women still receive a fraction of the pay that men do in the workplace and terms such as “legitimate rape” are being thrown around Congress by wrinkly, grey-haired white men, it’s clear that Moran’s call for a more modern form of feminism – a renewed vigilance – is absolutely necessary.

Moran is neither a rosy optimist nor a hellfire and fury nihilist though, and her understanding of feminism in 2012 is stirring in just how confident, laidback and simple it is. Moran rallies against the perceived “normality” in everyday life, the things we accept as “just the way it is.” How to Be a Woman vigorously and convincingly questions these perceived norms, from the silky smooth, slightly pedophilic vanishing of pubic hair to the industrialization of the wedding ceremony.

While all of this sounds fairly lighthearted – and make no mistake, How to Be a Woman is laugh-out-loud funny – the book’s success comes from its balanced militancy. How to Be a Woman is a sneaky coup of sorts. Blunt, but never heavy handed; outraged, but never out of control; honest, but never reckless or alienating. There’s something truly radical about Moran’s work here, the way she identifies widespread cultural imbalances and picks them apart with precision, wit, and rationale. With an election looming in the United States, one that carries significant weight for many female citizens, it’s hard to overstate the importance of Moran’s book. How to Be a Woman is a conversation, a lecture and a diatribe; a necessary and compelling deconstruction of the current cultural zeitgeist.

In this feature our writers defend films they feel have not received their due. When an ar…