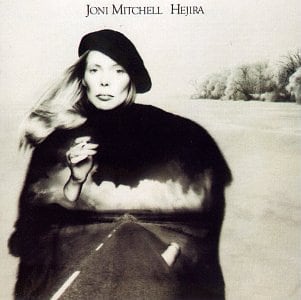 1976. The Bicentennial. Jimmy Carter. Disco. Punk. Just a couple of years earlier, folkie chanteuse Joni Mitchell was at the peak of her storied career, scoring a chart-topping album, Court and Spark, and spinning off top 10 single “Help Me” and the also highly ranked “A Free Man in Paris.” But the slick jazz-rock sound of those records was already falling out of fashion by the time of her follow-up, The Hissing of Summer Lawns, which was brutally savaged by critics and received virtually no radio play. Stung by the criticism, weary of touring and suffering the breakup of yet another relationship, Mitchell hit the road in January 1976, offering to drive a couple of friends who were moving from California to Maine. After a brief stay on the East Coast, she made the long drive back to California by herself. In the midst of the lonely cross-country trip, the songs that would make up her next album, Hejira, started to coalesce. It would become the most successful record of her career—artistically, if not commercially.

The title comes from the Arabic word “hijra,” meaning “journey” (more specifically, the Prophet Muhammad’s migration from Mecca to Medina in 622), and the word encapsulates Mitchell’s overall theme of “running away with dignity.” Throughout the album, Mitchell wrestles with the incompatibility of her desire for love and security with an essential need for independence, inevitably abandoning the former for her music and the “Refuge of the Roads.” The restive discomforts and transitory pleasures of travel permeate every song on the album. On opening track “Coyote,” Mitchell says she has “No regrets” since she’s just a “hitcher” and “A prisoner of the white lines on the freeway.” On “Amelia,” she compares herself to the doomed pilot Amelia Earhart, lost and flying solo: “A ghost of aviation/ She was swallowed by the sky/ Or by the sea, like me she had a dream to fly.” On the title track she is “porous with travel fever” and contemplating mortality, “A defector from the petty wars/ That shell shock love away.”

On the driving, up-tempo “Black Crow,” Mitchell describes her frenetic itinerary: “I took a ferry to the highway/ Then I drove to a pontoon plane/ I took a plane to a taxi/ And a taxi to a train/…How’m I ever going to know my home/ When I see it again?” Elsewhere, she describes various stops along the way: a “Blue Motel Room,” “A Strange Boy” with whom she has a brief affair, and a visit to Memphis where “Furry Sings the Blues.” The centerpiece of the album is “Song for Sharon,” a nearly nine-minute ode to a childhood friend who has “got a husband/ And a family and a farm” while Mitchell only has “the apple of temptation/ And a diamond snake around my arm.” Although her friend’s happy fate is not her own and true love seems to forever elude her, Mitchell takes comfort in the road she’s perpetually traveling, hopefully concluding that she’ll “walk green pastures by and by.”

Although Hejira features some of Mitchell’s most moving and sumptuously poetic lyrics, it is the music surrounding them that makes the album so enduring. By the time of its recording, cigarettes had deepened her voice, turning an ethereal soprano into a dusky alto, giving these songs an emotional heft her younger, sweeter voice could not have supported. Moreover, Mitchell’s guitar playing had come into its own: a highly personal, idiosyncratic style of delicate fingerpicking and percussive strumming spiced with a variety of odd tunings and jazzy chord voicings. Eschewing a full band, Mitchell is mostly accompanied by nearly subliminal percussion and deep, propulsive bass, notably provided by the legendary, ill-fated Jaco Pastorius, who gives one of the finest performances of his brief career. As busy and inventive as ever, Pastorius is also unusually subtle and tasteful, never showboating as he was wont to do. His nimble fretless bass intertwines seamlessly with Mitchell’s gleaming guitars to provide the appropriately restless and galvanic atmosphere on songs like “Coyote,” “Hejira,” “Black Crow” and “Refuge of the Roads.” Elsewhere, a straight-ahead jazz rhythm section provides quiet, supple accompaniment as on the torchy “Blue Motel Room” and the rustic “Furry Sings the Blues” (which also features Neil Young’s inimitable harmonica); otherwise, the ensemble is stripped down to just two guitars and a vibraphone as on the haunting “Amelia.” The simple yet effective production puts the spotlight on Mitchell’s voice and guitars while her accompanists forge a new kind of folk/jazz hybrid that is utterly unique. Unlike the fusion-y earlier albums or her icy, digitalized work in the ‘80s and beyond, Hejira avoids sounding dated–it’s as fresh today as it was in 1976.

Hejira was critically well-received and its reputation has steadily improved, but at the time it yielded no singles and sold only moderately well. The follow-up, Don Juan’s Reckless Daughter (1977) was almost as good musically (including six more tracks with Pastorius), but the overlong double-album was marred by overreach and patches of dubious experimentation. Even worse, her 1979 collaboration with the terminally ill Charles Mingus only served to reveal Mitchell’s limitations as a jazz musician and was almost gleefully derided by critics and fans alike. She never quite recovered from this artistic and commercial nadir, despite a brief return to form in the late ‘90s. Her final album, the half-hearted Shine, was released back in 2007 and Mitchell has since completely withdrawn from music, devoting her time to the solitary pursuit of painting. Given all that has transpired since the ‘70s, it is tempting to regard Hejira as simply the last great Joni Mitchell album—but it is not only that. Hejira is also one of the great albums of all time, a record that refuses to settle down, get old and die.