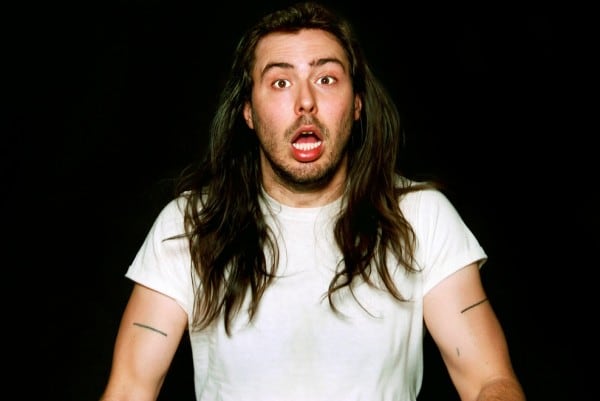 It’s hard to believe a decade has already passed since Andrew W.K.’s I Get Wet hit store shelves and started a worldwide party that our ears are still ringing from. At a time when rock music was having a resurgence through the stripped down precision of groups like The Strokes, The Hives and The White Stripes, WK burst onto rock radio like a locomotive through a brick wall with party anthems that weren’t an armored mobile home with a Ferrari engine. With his breakthrough album getting the double-disc anniversary treatment, we spoke to Andrew WK about looking back on a decade of debauchery.

Just about the entire track list of I Get Wet has had an extended life through placement in all forms of media. With all the films, commercials, etc. it’s appeared in, do you have any favorite usage of it?

I was just telling Andy Dick, who was in the movie Old School, that they used one of the songs from I Get Wet in the house party scene. Then, “She is Beautiful” was in Freaky Friday, the version with Jamie Lee Curtis and Lindsay Lohan. That’s a real thrill for anybody, a legendary actress and a new legendary actress in what’s a really great movie. I don’t have a particular favorite, but I’ve loved seeing it pop up.

You’re a songwriter, multi-instrumentalist and producer. Do you have a favorite part of the recording process?

I think finishing, once it’s done. The mastering and final mixing, I like that a lot. It’s a tedious process that’s often solitary. It’s just fun to be able to work on something, put everything you can into it, and see it take shape. I do appreciate how you can get really detailed and really fine tune it like a painting.

Speaking of paintings, the cover art for the I Get Wet anniversary edition is an oil painting of the iconic album cover. Where did the idea for that come from, and were there any other potential ideas you considered?

No, actually. We had thought about taking a new photo of the original cover, but that didn’t make sense for a number of reasons. The painting killed two birds with one stone in that way. The painting was made by an artist named Gonzalo Garcia who made it out of his own will for his art show. His painting looks more like the photo than the photo does.

Also on the re-release is a second disc of alternate versions of songs from I Get Wet. How did you decide which got included?

We wanted to have every track covered in some way, so that you could listen to the bonus disc and more-or-less hear the album in different versions. In one way or another, every song was represented in a different form. The live recordings, we were lucky to have those from a crazy way of capturing live sound. Instead of recording from the mixing board, we recorded it with mics from the stage to recreate what it sounds like playing the show as opposed to hearing it from the crowd or the soundman.

You recently were invited to speak on the subject of “How to Party Like Pinky Pie,” the character from “My Little Pony: Friendship is Magic.” How were you first exposed to the crossover hit children’s show?

Well, of course, like so many people I was a fan of ponies for a long, long time. They are an archetype unto themselves that even 1,000 years from now people will relate to and embrace [ponies] in the same way. And I think the recent phenomenon with the new series has definitely stepped up the level of intensity and excitement surrounding ponies to a level I don’t know has ever existed. Here’s one of the most popular animals, with a lot of kids‘ dreams to either have a pony, or ride a pony, pet a pony, whatever, and now this new program breeds that timeless excitement about this beast and taken it to new heights of intensity. People were telling me about Pinkie Pie at least going back a year, and it kept going and going. They invited me to speak about this certain attitude and mindset that I represented as a human that Pinkie Pie represented as a beautiful pony. God bless their little hearts, you know?

With the tenth anniversary of I Get Wet making for a good time to revisit it, is there anything you would go back and change?

That’s a great question, but no. Not necessarily because I wouldn’t want to change something, but I don’t feel it’s my place to do it. The people who made it, I’d imagine, even they would not want to change it. As far as I’m concerned, I’m lucky it exists at all. I wouldn’t dare to improve upon it or alter it in any way just because the whole past seven years of my life have been more or less thanks to that album.