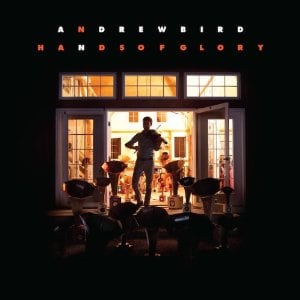 [xrr rating=3.5/5]Andrew Bird is one of those intense musicians who merges classically trained technical chops, confident cross-genre improvisation and an intuitive feel for processing sounds through loopers and other toys. Whether whistling, singing or playing violin or guitar, Bird effortlessly creates music of tasteful complexity. He’s also quite prolific. Like Prince or Robert Pollard, he seems to constantly record himself, releasing a range of studio and live albums, companion albums and numerous singles. So far, his high level of quality has prevented any dilution of his impact.

Earlier this year, he released Break It Yourself, performing a series of indie pop jams with his band. This album had a more relaxed feel than some of his solo material. His latest offering, Hands of Glory, is a follow-up/companion EP that roots itself in a simpler country folk sound. With a clearer vision, it’s much more consistent than Break It Yourself. While a couple of tunes were recorded in between tour dates, the bulk of the album came from looser acoustic jams, captured with a single microphone. This deliberate move back to folkier roots feels like he’s seeking comfort and a firmer foundation compared to some of his more experimental arrangements and equipment. The focus on cover songs and reworked versions adds to the feel of looking back more than forward.

Bird eases us into the album with the two studio pieces. “Three White Horses” begins with a meditative sparseness: a measured bass line, then the barest touch of cymbal and guitar. When Bird’s voice joins in to sing the first line, the warm reverb production lays a beautifully retro patina across the guitar line and vocals. This spare start sets a film noir mood. Then the second line blossoms as the backing harmonies splash color into the monochrome palette of the song. At its heart, it’s a simple indie folk song, but the heat shimmer of notes welling up add an ethereal touch. That smooth, haunting tone could be a slide guitar or the singing of a processed violin; either way, the spiritual touch matches the memento mori lyrical theme. “You will need somebody when you come to die.” The track builds into gospel intensity as the accompaniment grows wilder, but Bird’s voice and the acoustic guitar stay clean even as the thick haze of layered instrumentation crowds the other channel. The tune returns to simplicity to finish as a benediction.

The other studio track is a cover of “When That Helicopter Comes.” Where the Handsome Family’s original had a more traditional bluegrass/country rock sound, Bird speeds it up and polishes the edges down. Like “Three White Horses,” the slapback echo production on the vocals and guitar has an old school sound. He’s manipulated the chords on the refrain to briefly hint at a jazzy Western Swing and his violin fills here have a wistful sophistication. But darkness is never too far and the apocalyptic lyrics inexorably spell out a modern vision of Revelations. The track ends with an echo feedback tone that suggests that the helicopter might be closer than we think.

After these two studio pieces, Hands of Glory transitions to a rawer, old time folk style. Long ago, radio and stage shows often featured bands sharing a single mic and many bluegrass groups today maintain the tradition. Each song becomes a dance as players step forward and back to adjust their place in the mix. Bird has used this technique during performances to create an intimate roots feel and it’s a natural fit for these songs. Another key element in the band’s approach is based on a history of less directed playing. They’ve been having summer jam sessions for the last three years. They spend several days just relaxing and seeing where the songs take them. The first track of this section is a radical reworking of Alpha Consumer’s “Spirograph.” The indie pop original has none of the grace captured here. Bird’s version is clear and beautiful in its sadness. The verses remind me of Paul Simon or maybe Joni Mitchell’s “A Case of You.” The guitar work is fine in its subtlety: echoes, scratches and swells color in the emotional nuances of the song.

The next few songs are well executed, starting with a self-satisfied version of the old song, “Railroad Bill.” This is followed by the stately, stripped down “Something Biblical” and a cover of Townes Van Zandt’s “If I Needed You.” While these are nice tunes, the next peak is Bird’s reinvention of his song “Orpheo Looks Back” from Break It Yourself. “Orpheo” jettisons the syncopated gypsy feel of the original, slowing it down to create a more reflective mood. The pacing and folky integrity give the lyrics more depth and shade them with regret and experience.

Hands of Glory stays true to the idea of revisiting and reworking as it wraps up with the nine minute “Beyond the Valley of the Three White Horses,” an instrumental version of the opening track. Fully acoustic, it deconstructs “Three White Horses” into constituent parts. The violin begins against the background sound of crickets; then the staccato chord progression comes in. Bird’s violin has a nostalgic feel. The wordless vocals are full of longing and the harmonies sweeten the sound as they echo the slide line from “Three White Horses.” A little over a third of the way through, the song transforms as the choppy chords fade to make room for chamber sound, lush with bowed strings and a delicate whistle. This evolves into a Phillip Glass minimalism before it closes on a reprise of the vocal section.

Bird comes back to these pieces, not to repair them or to correct a mistake, but to find another jumping off point and see where it leads. This constant seeking is one of his core tenets. In this case, as he digs through his own musical roots, he shows how common ground can yield beautiful results.