Americans love a good conspiracy. Whether as mental gymnastics to pin a specific culprit to nebulous evils, as wishful thinking or even as a kernel of truth, conspiracy theories permeate our nation’s history and most prominent religions. They also make for spectacular entertainment. But most often thrillers involving conspiracies are either preachy (Syriana) or overly convoluted and implausible (The Da Vinci Code, but rarely are they as prescient as John Frankenheimer’s The Manchurian Candidate (1962). 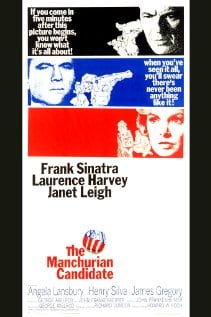 This film about elaborate political assassination came out 13 months prior to the events in that fateful Dallas parade that would lead to conjecture about grassy knolls and magic bullets for decades to come. Not only did the movie prove to be a canary in the coal mine of the assassination-heavy ‘60s, but its themes have carried through to the modern day. When a faction of American politics considers everything to the left of Ayn Rand to be abject socialism, and when an embarrassingly thick sliver of the population remains convinced that the President of the United States is actually a teleprompter-reliant, foreign-born interloper, it’s easy to see that while political circumstances may change, national power is often contingent on activating latent paranoia within the electorate.

But there was perhaps no more fertile ground for conspiracies to run rampant than the cloak-and-dagger years of the Cold War and the nation-rending witch hunts of McCarthyism. Frankenheimer’s film, based on the 1959 novel by Richard Condon, was released at the height of the Cuban missile crisis, and it revolves around the plot of Korean War POWs being brainwashed by Chinese operatives. One particular soldier, Raymond Shaw (Laurence Harvey), is programmed as an amnesiac political assassin who can be triggered by the Queen of Hearts playing card. Years later, Shaw’s commanding officer, Bennett Marco (Frank Sinatra), is haunted by dreams of Shaw following a Manchurian hypnotist’s orders to strangle a fellow soldier, despite that when asked about him, Marco automatically responds with the boilerplate, “Raymond Shaw is the kindest, bravest, warmest, most wonderful human being I’ve ever met in my life.” In a chilling turn by Angela Lansbury as Shaw’s mother and the wife of a flaky, McCarthy-esque demagogue senator, she is ultimately revealed as the insidious communist operative controlling Raymond in order to elevate her pliable husband to the presidency.

In contrast, Jonathan Demme’s 2004 remake was released one election cycle after Florida’s “hanging chad” shenanigans lead to the mindless progeny of a powerful political family taking the White House despite receiving fewer votes than his opponent. At the time, America was embroiled in two wars, including one that was initiated under false pretenses. And it wasn’t only the tinfoil-hatted who began to suspect that perhaps the American government itself had a covert hand in an attack on our own soil in order to provide justification for its clandestine goals. Conditions were ripe for an incisive conspiracy film that played on these deep-seated fears amongst the general populace that some in our government were wolves in sheep’s clothing. The Manchurian Candidate 2004’s adapted screenplay raised the stakes by making Shaw (Liev Schreiber) into a congressman and the eventual vice-presidential candidate (rather than his stepfather), while in this film his mother (Meryl Streep) is also a senator. In place of hypnotism and solitaire-based triggering mechanisms (which worked fine in 1962 but would have come off as cartoonish in the 21st century), Demme injects human experimentation laboratories and embedded mind-control nanotechnology. Interestingly, in its era of mailed anthrax, shoe bombs and phantom weapons of mass destruction, the remake switches the operatives behind the puppet assassin into the fictional conglomerate Manchurian Global, which does foreshadow the eventual rise of the 99% movement but basically ignores all mention of terror rhetoric so woven into 2004’s national fabric. 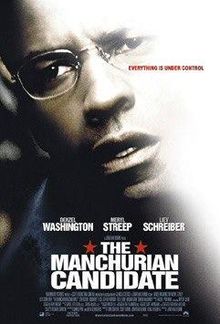 Both films wisely fictionalize the political landscape to avoid coming off as overly partisan. The original makes no mention of actual politicians of the early ‘60s, though communism is clearly both the real and imagined enemy at every turn. Yet its themes of xenophobia (“We don’t need interpreters here. We all speak the same language”), scapegoating and a with-us-or-against-us polarization of politics are as resonant in the 2012 election as they were in the Kennedy era. Meanwhile, the remake goes so out of its way to avoid parallels with the tone of 2004 that it appears to be some alternate universe incapable of projecting any social commentary. In the original, Lansbury’s Eleanor is terrifying in the icy brutality that leads her to utilize her own son as a murderous tool to achieve a power grab, while Streep’s turn is far less nefarious (and rather poorly acted) and seems motivated by hubris more than lust for world domination.

Denzel Washington’s version of the whistle-blowing Ben Marco is far more intertwined with the narrative than Sinatra’s was. Instead of simply trying to help Shaw clip the strings that pull him, Washington’s Marco isn’t only brainwashed to believe Shaw is a hero, but is actually a pawn himself and will eventually find himself peering through the scope from his sniper’s nest on election night. Shaw is a far more tragic figure in the original, as he ends up killing his new bride, his new father-in-law, his mother, his stepfather and then himself (and all after a lonely, “unlovable” life) . In the remake, the central focus remains on Marco, as he’s the one to dispatch Raymond and his mother while they’re locked in a Shakespearian death embrace. But, despite its flaws, the remake had managed to hold together reasonably well until its very end. Though Marco just assassinated the Vice President-elect and a sitting senator, his involvement is covered up by the FBI for some undisclosed reason and he’s flown back to the brainwashing facility for some tacky closure that involves setting a large photo of his old platoon adrift in the nearby water.

The political themes from 1962’s The Manchurian Candidate are timeless. Sensationalizing the mind-control method and dampening the tragic nature of Shaw by adding some Marco melodrama doomed The Manchurian Candidate 2004 remake to forgettable thriller status. As Americans head to the polls Tuesday to decide who will lead us through the next four years, the wing nut theories of voter registration fraud or, conversely, voting machine manipulation will likely fester within the losing party’s terrified fringes. Fifty years have gone by since Frankenheimer’s classic, but the same fear of conspiracy abounds in our hearts and minds today.