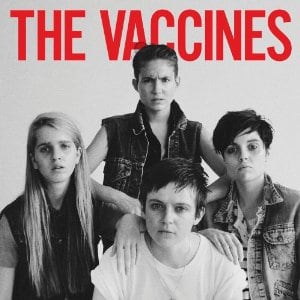 [xrr rating=2.25/5]I keep listening to Come of Age, the sophomore effort from the UK band the Vaccines, trying to figure out the conflicting feelings it stirs up in me. I can’t help but admire what I hear on the record. The songs are slick, catchy and almost obnoxiously ingratiating. What’s more, much of the music hits a certain nostalgic sweet spot for me, sounding like it’s the sonic spawn of an alternative music history in which college radio didn’t cave to the bruising rock reduction of Nirvana, a seminal passage that led directly to commercial radio embracing the more approachable version of the sound as practiced by Pearl Jam and then a glossy army of horrid sound-alikes. Instead, in the hidden limbo that Come of Age shimmers alive from, the professionally evolved version of post-punk that was happening concurrently became the norm. There would be a hundred bands just like the Vaccines if instead of Kurt Cobain and Black Francis, the trajectory of left of the dial music was set by those who looked to Andy Partridge and Elvis Costello to discern which horizon to point the ship towards.

Despite the appeal I find in that scenario, Come of Age is evidence that the better route may have been followed in the first place. It may be sturdy and likable, but it’s also weirdly flat and uninspired. It’s been constructed with such evident rigor and care that it often comes across as product, just as assuredly as the latest generic pop dynamos. The crisp studio sheen of much of the album only enhances that, making it seem as though it emanated from a next generation software program that can crank out an entire album once the “Indie Cred” box is given a checkmark in advance of clicking the “Demo” button. It has the same prevailing falseness of spirit that the Strokes have been accused of ever since their first album (a complaint they’ve occasionally deserved). The song “Bad Mood” could even be a buried track from the Strokes when they’re most mired in their tiresome, by-the-numbers mode.

There are all sorts of corollaries that can be named for the Vaccines. Among more immediate peers, they have some of the headlong dynamism of the Arctic Monkeys and a more tepid version of the bounding cheekiness of Los Campesinos! My mind is more likely to drift to artists that can speak of creative peaks taking place at a time when mobile phones were the size of well-worn bricks. “No Hope” sounds like the sort of song David Lowery might have come up with if he wanted Cracker to endlessly mine the exact same cynical indifference in the world that defined their first single, “Teen Angst (What the World Needs Now).” And “Aftershave Ocean” aspires to the pop tunefulness of latter period XTC. These are touchstones that should theoretically work for me, and yet it compounds the album’s lack of invention.

Of course, that doesn’t mean the band is incapable of pulling together a nice song, one that casually asserts itself as a gleaming pop gem. I can’t quite resist “Teenage Icon,” for example, with its fantastic hook, frothing energy and somewhat dopey lyrics that hang a glum, responsibility-shirking cynicism onto an outdated reference (“I’m no teenage icon/ I’m no Frankie Avalon/ I’m nobody’s hero”). Even in this instance, though, the Vaccines marshal their efforts into a practiced lackadaisical stance rather than try to fully engage the listener. Take it or leave it, but definitely don’t expect an attempt at convincing anyone that taking it is the preferred option.

The name of the band’s debut, released last year, was What Did You Expect from the Vaccines?, which seemed a preemptive acceptance of backlash as an act of ironic rebellion. Now I’d be willing to wager that it’s actually a worldview and an artistic business plan. How can anyone be disappointed when the band announces full intentions to avoid fulfilling any reasonable aspirations? Don’t like it? Get your own damn instruments. These guys surely can’t be bothered to entertain anybody.