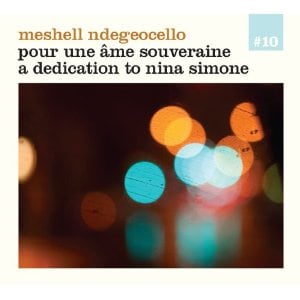 [xrr rating=4.0/5]If anyone was going to release a satisfying collection of songs popularized by Nina Simone, how fitting that it should be neo-soul champion Meshell Ndegeocello. Simone’s voice is inimitable, a shape-shifting thing as small as a chick then as big as a house and always just a little frayed at the edges. Ndegeocello’s is clear, faceted and yet hard enough to cut glass. What Simone’s voice would have towed behind her, Ndegeocello seems to roll easily in front; where Simone would roar, Ndegeocello sighs. Both has been an expert in her genre, but Ndegeocello ably transforms Simone’s gospel verve into her own R&B aplomb, and her self-assuredness makes the album much more than a collection of covers.

On its own, opening track “Please Don’t Let Me Be Misunderstood” would make this effort worthwhile. An understated vocal performance and droning synths speak to a sort of quiet desperation while unsubtly revealing Ndegeocello’s insecurity: don’t let this honorific be misread by Simone’s apostles. She follows with her first bold reinterpretation as if to underscore that instead of imitating the icon, the album serves to honor and mimic Simone as an interpreter. “Suzanne” is a peppered big-band rendition of the oft-covered tune penned by Leonard Cohen. Whereas Simone retained the original’s somber tone, Ndegeocello renders it a gospel song, worshiping instead of regretting Suzanne. It shares much in common with Mark Ronson and Amy Winehouse’s popular cover of “Valerie” in its re-energizing pop sensibilities and ability to effortlessly shift genres.

Whether out of respect or changed context, Ndegeocello leaves explicitly political songs like “Mississippi Goddamn” with Simone’s memory. Across the universally romantic selections, she chooses to dwell on individual’s lived experience. Of course, the personal is political. Cody ChestnuTT performs a poignant rendition of “To Be Young, Gifted and Black” that calls for an influx of talented black youth and familial support throughout the lives of these children. In an industry and world plagued by personal and institutional racism, as the Supreme Court once again debates affirmative action and blowhards refuse to kill the canard of President Obama’s foreign birth, the tune retains a depressing relevance. Yet, as when a young Simone was rejected by the Curtis Institute of Music because of her race, the message is to press forward and find self-actualization through your talents. ChestnuTT finds heartfelt truth in the cheeky lyric, “To be young, gifted and black/ That’s where it’s at!”

Tracks like “Feelin’ Good” and “Four Women” further this personalization of social and political inequality. The former reflects the ever-popular spiritual desire to overcome deeply ingrained inequality that has made the song a classic. In her rendition, Ndegeocello’s voice is near to breaking until she reaches that famous chorus: “It’s a new dawn/ It’s a new day/ It’s a new life for me/ And I’m feeling good.” Here, she is all power and forward movement, all good feelings. On the other hand, “Four Women” starts as a haunted and nearly unrecognizable rendition, with voice distortion giving way to a guitar line reminiscent of “Please Don’t Let Me Be Misunderstood.”

Ndegeocello invites guest stars to contribute, making the album feel more like the recent tribute concerts and collections that celebrate well-loved artists of the ‘60s and ‘70s. Toshi Reagon harmonizes on “Real Real” and takes lead as the ruined victim of the “House of the Rising Sun.” Sinead O’Connor, Lizz Wright and Tracy Wannomae appear. Valerie June lends a rootsy tinge to a fairly faithful rendition of “Be My Husband,” which only diverges from the voice-and-drum original when a chorale joins June for a late chorus. The guests elevate the album to a large and long overdue celebration of Simone.

Simone was an activist interpreter throughout her career, filtering songs by Billie Holiday, poems by Langston Hughes and plays by Lorraine Hansberry through the lens of a young civil rights activist and black separatist. Simone was one juncture of traditional and modern folk, Baroque composers and the Harlem Renaissance, politics and personal. Ndegeocello is now another. It would be impossible to recreate the same conditions that made Simone a star and her recordings so memorable, so Ndegeocello celebrates them. Her vision is sure and her interpretations impeccable. Its playful, experimental, yet reverent nature is the perfect tribute to the groundbreaking artist.