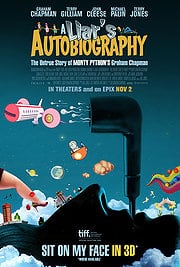 [xrr rating=1.75/5]A Liar’s Autobiography can’t be faulted for a lack of ambition. Anyone can make a documentary about a famous figure, especially someone who made his living largely through television and the movies, by stitching together archival footage, perhaps supplemented by a few talking-head interviews with his admiring peers. The directing trio of Bill Jones, Jeff Simpson and Ben Timlett take an entirely different tack in their film focusing on the life of Graham Chapman, famed member of Monty Python’s Flying Circus, who was central enough to the troupe to play both King Arthur in Monty Python and the Holy Grail and the titular protagonist of the gleefully heretical Life of Brian. There’s the occasional use of old video, but the vast majority of the film is depicted in ever-shifting styles of animation, offering colorful and sometimes surreal depictions of events in Chapman’s life, often narrated by the man’s own voice, utilizing recently unearthed audio recordings that he made shortly before his death in 1989.

Ambition doesn’t necessarily translate into sterling execution, however. The most remarkable thing about how messy and uninspired it is might be how badly it misses in a clear attempt at evoking the jubilantly anarchic spirit of classic Monty Python. There are 14 different animation houses represented, producing material in just about every approach imaginable, including traditional hand-drawn, stop-motion and computer animation. They roughly cover different passages of Chapman’s life—his dreary youth as a misunderstood bookworm, his sexual self-discovery as he came to realize he was gay, his decadent descent into alcoholism when he was flush with fame and success—but occasionally swerve back and forth, accentuating the admittedly impressive range of effort.

Most of the material is shockingly flat, making the film into grinding trudge. A striking, tumultuous life that was rife with transformational acts of creativity is diminished by sophomoric gags and garishly busy imagery. (Want to see clouds made of boobs? Then this is the movie for you!) It’s even more disheartening because this is likely the closest the world will likely come to a reunion of the surviving Pythons, both because every member of the remaining quintet is within a couple years of the age of 70 and because a sourness that’s long existed has been pushed to new heights in recent years, fueled at least in part by Eric Idle’s break-off success with Spamalot and other shrewd endeavors mining his own history. Excepting Idle, every Python lends his voice to project, sometimes playing himself, sometimes chirping out a broader character such as one of Chapman’s parents or some other glancing figure in his life (John Cleese does a very funny take on David Frost, for example). As with every other aspect of the film, there’s largely no verve to their performances. The prevailing drabness exists at such a distance from even the weakest earlier Monty Python efforts that having the men onscreen in any way only harms the film further. It’s a bad sign when comedy legends get outperformed by Cameron Diaz, who provides a strange but also oddly endearing vocal performance as, of all people, Sigmund Freud.

It’s also a bad sign when enormous effort goes into the construction of an animated film and the few dollops of live-action footage in it are significantly more entertaining. The filmmakers undoubtedly felt they were honoring Chapman’s spirit in the way they mashed together a bounty of bizarre ideas, eschewing any fealty to good taste along the way. And yet the slush pile of material is entirely outclasses by a handful of simple words delivered by Cleese as an eulogy at Chapman’s memorial, included at the end of the film. Cleese prankishly undercut his somber, respectful words by announcing from the stage, “Well, I feel I should say, ‘Nonsense! Good riddance to him, the freeloading bastard,’” adding, “And the reason I feel like I should say this is he would never forgive me if I didn’t. If I threw away this glorious opportunity to shock you all on his behalf.” That inspired insolence is exactly why Chapman is worthy subject for a documentary, and it’s also the precise reason this dreadful film entirely lets the man down.