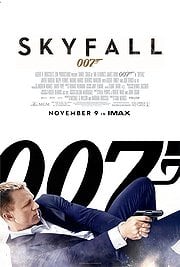 [xrr rating=3.25/5]One of the most remarkable aspects of the James Bond series is the way the films are unavoidably linked to the political climate in which they were made. Rarely do they ever engage geopolitics realistically, but the series would be nothing without this as a backdrop. It’s debatable as to whether or not any Bond film has ever actually made a salient point about global politics, but historical changes do manifest themselves in the films’ plots. In fact, Skyfall explicitly mentions one of the predominant theories of international relations, namely that after the collapse of the Soviet Union, and with it the bipolar structure of global power, the “enemy” of the developed nations of the West is not the united force of rival states but individuals and smaller, sub-national collectives such as terrorist cells. And so in Skyfall, the requisite villain is a lone wolf operative, a former MI6 agent named Raoul Silva (Javier Bardem), who is seeking revenge after being sacrificed in the line of duty. It’s not just that Skyfall feels modern because of its cutting-edge visuals—the film is really more a product of cinematographer Roger Deakins than director Sam Mendes—or because Daniel Craig brings grit and pathos to a character who, we must admit, is rather cartoonish. Rather, the film is a natural byproduct of the changing political landscape.

At its best, then, Skyfall conveys a world-weariness that is deeply recognizable. The film begins with what we are led to believe is James Bond’s death. He survives, of course, but he enjoys a little R&R before returning to London. In the past, the Bond character seemed to have it all, stylishly achieving his objectives while bedding the girl and having fun, but here the tension between the private and the public is more pronounced. It is only when Bond sees news of a terrorist attack on the MI6 headquarters that he is stirred to return to active duty, recognizing his responsibility to others. More than once, the film acknowledges that for Bond, necessarily, work must always go on, and even as he gets older, he cannot extricate himself from his duty and live a life merely for himself. But this feels hardly noble, partly because of the precise nature of the threat: the glory of one country versus another, in which an entire people can prove their worth and even superiority, is replaced by the constant extermination of individual terrorists and cells. In fact, Bond’s nemesis here, Silva, compares the two of them to rats. The threat shrinks in size, but the sheer numbers overwhelm the capacity of even the most powerful nations to keep tabs on them at all times. They scurry about like vermin and wreak havoc, and this couldn’t be more different than a wartime grandeur.

Silva is an interesting Bond villain. A cyberterrorist, he has the power to momentarily bring a city to its knees from within. Mendes’ approach is highly reminiscent of Christopher Nolan’s Batman movies, and more than a few shots and scenes of Bardem’s Silva make him appear like a more mortal Joker or Bane. But Nolan’s films are less concerned about politics than they are about the metaphysical nature of good and evil. It is in this way that Nolan most resembles the French silent filmmaker Louis Feuillade, whose supervillain character Fantômas was a single individual like Silva but whose evil deeds seemed to spread over the city like an uncanny, shadowy nightmare. Instead, Mendes and Bardem opt to psychologize Silva while halfheartedly turning him into a monster. The effect doesn’t fully work, but there’s some rich psychosexual, even Oedipal undertones to Bardem’s performance that give his character if not verisimilitude, then weight. Like Nolan, Mendes and Bardem are attempting to create a modern update of what is essentially a cartoonish supervillain, and there’s more than a bit of Heath Ledger’s Joker in Silva, physically, emotionally and behaviorally.

There’s some psychological depth given to Bond here as well. The death of his parents as a child is trotted out as some grand explanatory event. The effect isn’t really to create the sorts of lifelike characters demanded by today’s penchant for realism: Bond is still Bond, one of the most iconic characters in all of cinema and someone who has ceased to be merely mortal (can a movie ever convince us he could ever die onscreen?). But while the characterizations of Bond and Silva don’t fully take root in them as characters, they tend to saturate the atmosphere of the film. An anecdote about Bond as a child, hiding away for a few days after his parents died and then emerging again as a “man” rather than a boy suggests a certain lack of innocence that characterizes the world of Skyfall, which is strikingly different from the earliest Bond films. While the film should never be held up as exemplary in its thinking through of political matters, it does succeed in conveying something of the flavor of contemporary geopolitics, more like Pierre Morel’s Taken or especially From Paris With Love (its title, of course, being a play on the second Bond film From Russia With Love) than anything in Nolan’s tackling of the Batman mythos. For filmgoers already enamored with the Bond series and the significance of its characters, world and protocol, Skyfall does a great many things right, and you wouldn’t have to bend over backwards to make the argument that it’s the best-looking Bond film yet. In fact, the degree to which you think these stunning visuals, Deakins plunging gleefully into abstraction at times, are wasted here largely depends on your ability to think through the world of Bond rather than outsmart it.