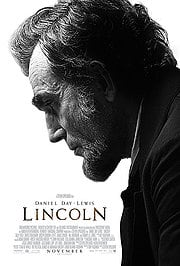 [xrr rating=4.0/5]In some ways, the biopic is the lowest common denominator of “serious” film. The worst offenders surround a great impersonation (I am loath to call waxwork impressions in films such as Ray and Walk the Line to be true acting) with a sweeping, yet lackluster script, one that has a surfeit of big moments that really add up to very little. The worst biopics take a paint-by-numbers approach, telegraphing key points in the subject’s life, hovering somewhere between what is really true and the idealized legends and yarns that have been spun about our hero. Watching movies like Gandhi make me twitchy. They are distillations of lives that don’t deserve distilling.

I breathed a sigh of relief when Steven Spielberg’s Lincoln began not with Honest Abe growing up poor in a log cabin, but during the final months of the president’s life. The Civil War is raging in its death throes. Ending the war is on the president’s mind, but so is passing the 13th Amendment, the one that would ultimately abolish slavery. And despite a grand performance by Daniel Day-Lewis as Lincoln, the 16th president of the United State is actually not really on the screen all that much during the film’s 150 minute runtime.

Armed with a script by Tony Kushner, Spielberg creates one of his most unsentimental films, wisely stripping the film clean of decisions that have sunk or attempted to sink grander projects, from emotional collapses by German entrepreneurs to repeated maxims such as, “Earn this,” things that threaten to leak saccharine into the darkest eras of world history. Kushner and Spielberg also neatly avoid grandstanding their politics. Make no mistake, Lincoln comes out in an election season in which many feared the soul of the country was at stake, but the film artfully staunches its bleeding heart and presents a matter-of-fact account of the machinations and conniving needed to push through that historic amendment.

So Lincoln isn’t a biopic at all. Instead, it is a political procedural that gives us a glimpse of the politics at play during the Civil War. Kushner’s script is a talky one, full of blustery blowhards, braggarts and hypocrites. Entrenched amongst the factions are different important figures who have their own ideas about where and how Lincoln should address his energies. Tommy Lee Jones puts his hound dog countenance to best use as Thaddeus Stevens, the radical Pennsylvania Republican who will stop at nothing to end slavery. Meanwhile, the more moderate Frances Blair (Hal Holbrook) is more interesting in brokering peace than ending slavery. Spielberg casts us onto the floor of the House of Representatives, giving us a ringside of the debates between the Republicans and the obstinate Democrats, headed by the pigheaded Fernando Wood (Lee Pace). American politics were very different in the 1860s, more Question Time than C-SPAN monotony and Kushner’s verbal fireworks crackle and pop on ready display.

Towering above the squabbling is Day-Lewis in one of his most dignified roles. Not one iota of Bill the Butcher or Daniel Plainview histrionics seeps into a performance that is subdued, lived-in and believable. Day-Lewis is an actor that sinks into a role, and he allows one of our most beloved presidents to envelope him, avoiding any smacking of Hall of Presidents animatronics. It is surprising to hear him speak even. Day-Lewis’ Lincoln doesn’t have the deep, commanding voice we so often associate with the president. Instead, he plays him with a reedy tone, one that is weary from so many years at war. Day-Lewis also infuses his character with a subtle sense of humor and wry charisma, a president who frustrates his allies with long-winded anecdotes about Ethan Allen and other American lore. Even though he isn’t on-screen in every frame, Day-Lewis’ presence looms large over the picture. Even though character actors James Spader and John Hawkes threaten to steal the show as a pair of energetic lobbyists and Jones sinks his teeth into the role of Stevens, Day-Lewis gives the performance people will be talking about here for years to come.

Lincoln works well by blending the president’s pained private life in with his politics. Despite one melodramatic face-slap, Spielberg’s Lincoln lives an existence of muted pain. Still consumed by anguish following the death of 11-year-old son Willie, this Lincoln wears the loss like a shadow. His wife, however, allows the tragedy to affect her more deeply. Sally Field plays Mary Todd as a shrill, heartbroken conservative, one who attempts to commandeer her husband by using guilt as her riding crop. The scenes behind closed doors, the ones where Lincoln and Todd argue are painful without being bombastic, realistic without being too careful of history. Field is truly marvelous as the unstable Todd, one who bullishly throws around her political influence while her Great Dane of husband tries for a more gentle approach. Joseph Gordon-Levitt shows up as oldest son Robert, but his subplot is less effective than the barely concealed pain that tears at his parents.

Unfortunately, Lincoln is not quite the masterpiece Spielberg possibly wished to add to his expansive oeuvre. You would think after so many years of making movies, Spielberg wouldn’t still be underestimating his audiences. John Williams’ music cues us when Lincoln is about to say something important, a move that blatantly underestimates the audience and counteracts the denseness and subtlety of Kushner’s script. Lincoln also suffers from over lengthiness. The perfect ending would have been the passing of the 13th Amendment, but Spielberg keeps us tethered through the surrender at the Appomattox courthouse and Lincoln’s demise. This coda feels tacked on, an obligatory ending rather than a true closing to what is really at stake in the film.

If anything, Lincoln returns dignity to politics sullied by CNN tickers, dishonest politicians and the grubby hands of corporate America. It was time where the war wasn’t just ideological, but countryman fought and killed countryman. Spielberg takes us unflinchingly into the eye of the storm and within its calm center we see a character and legend that still towers over us all a century and a half later. It’s an impressive feat, a Lincoln for the ages made of flesh this time rather than Georgia marble.