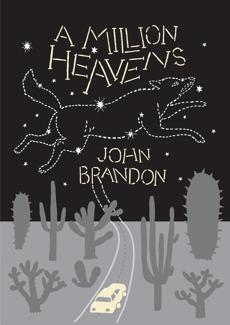 [xrr rating=3.0/5]John Brandon’s first novel Arkansas contained a chapter called “Boredom is Beautiful,” a phrase that would make an apt epigraph for the rapidly expanding oeuvre of this prolific young writer. Brandon specializes in a charged representation of idleness; even when his characters commit crimes, as did the low-level gangster slackers in Arkansas or the tween kidnapper in Citrus County, they inhabit a low-stakes but vividly human landscape defined more by offbeat observation than traditional drama. His books float along in a pleasantly deadpan haze, funny without jokes and evocative without a lot of detailed description.

Brandon carries this method into his third novel in four years, the quietly ambitious A Million Heavens, with slightly diminishing returns. In a small New Mexico desert town, depressed in both senses of the word, a boy falls inexplicably into a coma after playing a piano tune that may or may not have been channeled from the divine. A group of local lost souls gather in weekly vigils outside the clinic where the boy sleeps, mainly out of concern for their own broken lives. Brandon structures the novel in brief, alternating chapters from the points of view of these townsfolk, each seeking change or recovering from trauma: a lovesick mayor, a grief-stricken college student turned arsonist, a woman trying stealthily to get pregnant, a gas station owner longing for escape, a father coping with a famously comatose son.

Brandon assiduously probes the inner lives of these united loners, but sprinkles his psychological realism with a light dusting of vague mysticism: the unexplained coma, a dead rocker sending musical transmissions from the afterlife, a personified wolf struggling with his animal instincts. This seems like a notable departure for an author who revels in the mundane, but the metaphysical details merely replace the criminal milieu of Arkansas or the inciting drama of Citrus County: one more irregularity for Brandon to dip in the cleansing waters of the ordinary.

Brandon tends to falter with dialogue, and the interaction between his characters is sometimes unconvincingly artificial. When a woman on a date says, “I never finish the last sip of wine” because “it’s too sad,” we’ve entered the territory of distastefully quirky Sundance movies about sensitive outsiders. The soft minimalism of his prose, which served him well when he focused on the criminal acts of fuck-ups, occasionally veers into Dr. Phil territory when applied to the inner emotional landscape that dominates the pages of A Million Heavens: “Dannie wondered if the others were hoping she’d stay like she was hoping they would, and she wondered if they felt weak for hoping that, for needing someone else to be alone with.” Something about this line’s loping gait nullifies its nuance. McSweeney’s, which has published all his books, formerly clung to Brandon’s relative tough-mindedness like a spiky life raft in sea of twee. But in this novel the author moves closer to their putative house style, for better or worse.

Brandon’s brew of spirituality, ensemble psychology, earnest emotion and stone-faced style constitutes his most ambitious effort yet, but his least satisfying. With no narrative throughline, Brandon’s cyclical themes of grief and recovery don’t fully land, and the shifts between character perspectives increasingly assume the form of a molasses-like plod. Such a slog makes it clear that Brandon’s aforementioned axiom applies only to characters, not readers: boredom is beautiful, but being bored is boring.