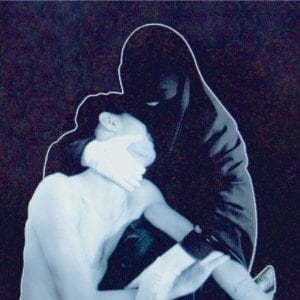 [xrr rating=3.75/5]Discord has long been the central weapon in Crystal Castles’ arsenal. Whether through song titles such as “Air War,” “Vietnam” and “Crimewave” or by pairing abrasive shrieks and cacophonous electro-clatter with intensely danceable bleeps and bloops, the Toronto duo have churned out two prior albums that roiled with fiercely unstable elements. Their dark beats assail the senses and compel the listener into motion as if through coercion or chemical warfare. This third LP, simply denoted III, hunkers down in the smoldering rubble to steel itself against the marauding phalanx of flamethrower-toting storm troopers. III writhes amidst apocalypse and fallout, or at least that’s the image the band wants to project.

In recent interviews, manic vocalist Alice Glass has routinely pointed to oppression and atrocity inflicted upon the world’s most vulnerable as the impetus for this album, and with lyrics like “Your first born will be accosted/ Fill their lungs with tar and sage/ Make the stem cells act their age” it’s tough to argue that one of the more darkly danceable bands out there aren’t wholeheartedly stabbing at social commentary. In the band’s eyes the world remains perpetually clenched in an iron fist and egregious injustices make for even more bleak lyric fodder than have cogs in machines or additional bricks in walls. Of course, nearly all vocals are indecipherable given Glass’s frenzied bleating, but that’s beside the point; the emotive power of their music trumps language. Meanwhile, producer Ethan Kath has ensured us that this album is different from anything the band has done before, as they tossed out old keyboards and synthesized effects and opted to record everything on new equipment, and Glass’s trapped-deep-underground vocals were recorded in a single take to keep them lo-fi and urgent.

But once you pare away the shock-and-awe bluster that accompanies this duo whose feverish output would lead you to believe they sustain themselves solely on a cocktail of absinthe and adrenaline, you’re left with a remarkable LP, but one that still hints at untapped potential. III is a brooding, bleak record, but its best moments are still the dance tracks, and it may be close to a definitive Crystal Castles album without quite hitting that mark. The duo cloaks their music in grim imagery, such as the tear gas victim cover art, or a potent mix of comfort and foreboding with lyrics such as “I’ll protect you from/ All the things I’ve seen,” but gloomy lyrics combined with high energy essentially prompt the listener to dance while the world burns.

The album’s runaway best song is “Violent Youth,” and it’s buried near the tail end of III with the other highly danceable tracks. Glass’s distant vocals remain calm throughout the bouncy electro-beat and rapid-fire drums, with helium-huffing munchkin vocal effects injected into a chorus recalling the best moments from their debut’s “Untrust Us.” The same kinetic energy carries into “Telepath,” with its droning backing, stratospheric keys and head-bobbing percussive bounce. “Transgender” lofts some of Glass’s calmest vocals just above the pull of the murky synthesized bass undertow, skittering machine percussion and pounding bass drum. And this pocket of perpetual motion saves the album from being entirely too thematic.

III’s first half, while effective, beats the listener over the head with oppressive imagery. “Plague” is less infectious than most Crystal Castles singles, prying the album open with metallic effects that steadily approach like roving searchlights and then blasting the track apart with Glass’s wails. “Kerosene” drones like a jet engine and brings back the chirping elf-like vocal coos interspersed with calmer, and intelligible, mic work by Glass. Despite its title, “Wrath of God” actually smoothens out into a moment of solace, with icy keys and a few sprays of the band’s trademark video game effects that are otherwise conspicuously absent from the album. Later, “Pale Flesh” sets an army of robotic spiders plinking down whatever waterspout the distant, echoing Glass is apparently singing through. The synth screeches and brawny beat of “Sad Eyes” are ultimately tempered by oases such as “Affection” and most notably “Child I Will Hurt You,” which despite its title is actually a wintery salve that closes the album out very literally like the calm after the storm.

III is appropriately titled, as it’s a progression for the band, but one that is also inextricably linked to its predecessors. It’s another sequel, not a complete divergence or reinvention. And there’s nothing inherently wrong with that; why fix what’s not broken, or in the case of the duo’s aesthetic sensibility, why invent new ways to break shit to pieces when you’re already among the vanguard of the furious throw-down? But the album is far more enjoyable when Crystal Castles’ plastic diatribes about oppression and raging against the machine are taken with a grain of salt.