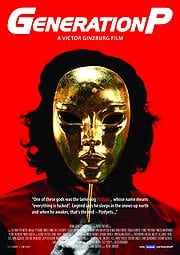 [xrr rating=2.75/5]The “P” in Generation P refers to Pepsi Cola, the drink of choice for the last generation of Soviets, a rapidly Westernizing group who, like their Gen X counterparts, preferred to lounge around and go to school for esoteric liberal arts degrees rather than function in a utilitarian society. The protagonist, Babylen (Vladimir Epifancev), even works in a kiosk selling cigarettes in a post-perestroika variant of the characters in Clerks, and his cynical short-changing of customers and sarcastic, vulgar descriptions of products further ties him to the likes of Dante and Randall. The latter trick opens doors for Babylen when his tossed-off slogans get him a foothold in the booming marketing and advertising industry.

Everything starts simply, and humorously, with Babylen, a man who never bought into the Soviet way of life, paid as a copywriter to take Western products and rework their appeal for a country still weaning itself off communism. This means taking the bright, alluring nature of capitalistic ads and replacing them with anti-democratic authoritarianism and violence. As Boris Yeltsin sends the military to attack Parliament in the middle of Russia’s 1993 constitutional crisis, Babylen hits big by tying Parliament cigarettes to the ordeal, replacing the Russian White House with a towering pack of cigarettes impervious to the shells of Yeltsin’s tanks. It is a ludicrous campaign, yet as apt at nailing an abstract national self-image as Marlboro’s quintessential cowboys.

The bizarre wrapping of capitalism in communist clothes initially makes for pointed barbs at both systems. That the Western ads have to be stripped of ideology exposes the absurdity of subliminal suggestions of freedom coming from an international brand like Coca-Cola. That the Russians feel they must impose order through products is even more perversely funny and speaks to a centuries-old tradition of subjugation and dominance in Russian power. If Generation P accomplishes nothing else, it sports possibly the funniest riff on Cool Guys Not Looking at Explosions, casting a Tic-Tac commercial as class warfare with a proletarian stud popping a few mints as an oligarch’s car explodes in the background.

As the film delves further, however, the sociopolitical satire rapidly falls apart as director Victor Ginzburg must head into ever more frenzied postmodernism to faithfully adapt Viktor Pelevin’s novel. Babylen works as a disaffected individual selling communism to live the capitalist high life, but his expected addictions to cocaine and other substances gradually lead to psychotropic narcotics that spin the movie off in strange directions. Ginzburg has a great deal of visual fun with the protagonist’s hallucinations, summoning the spirit of Che Guevara to give a Buddhist-tinged sermon on the nature of television as images bend and warp around each other. For all the wildness of the sequence, however, the funniest joke is still that the source image of Che comes from a coin, an ironic placement of communist heroes on the lifeblood of the free market: money.

Gradually, Babylen fails upward as his clients are mysteriously killed before they can pay and he gets drawn ever closer to the ones orchestrating the killings. After a time, the satire of advertising and its application in Russian culture turns fully political as the new order recruits Babylen to help write their fictional candidates. The same marketing know-how and new technical innovations that promised to bring capitalistic excess to Russia are instead put toward maintaining control of the people without even having to go to the trouble of finding a psychotic leader who could turn on his kingmakers. Generation P loses the thread as it pursues this line of commentary, and when a character asks Babylen, “Do I need to explain the symbolism?” during one of his hallucinations, I found myself hoping the character would say yes. The film brims with ambition on an aesthetic and narrative level, and at times, one of its points even manages to worm its way into the brain almost in spite of itself. Generally speaking, though, Generation P has no follow-through, too busy introducing new, unconnected ideas to follow through on any one of them. If the story intends to show the uniquely Russian way the former USSR imbibes supposedly free ideals, its haphazard execution demonstrates that wonky postmodernism can derail one of their films as quickly as a Western one.