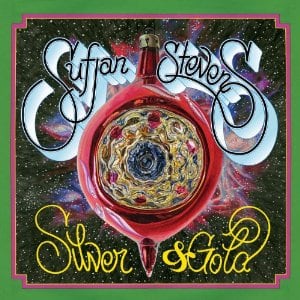 [xrr rating=2.5/5]The holiday music market is generally a softball field. Anyone can crank out a few carols—see anyone’s mother’s collection of Christmas albums for classics from Billy Squier or 98 Degrees—to make a few easy dollars. Yet it takes the composition skills of Henry VIII or Run D.M.C., or the performance skills of Mariah Carey or Bing Crosby, to make a true classic. Far be it from me to question twee wonderboy Sufjan Stevens’ motives for producing another 60-track collection of Christmas carols, though. His catalogue has a history of meditative obsessiveness, from his Chinese zodiac-inspired Enjoy Your Rabbit to the meticulously researched, dense albums Greetings from Michigan: The Great Lake State and Illinoise to his previous collection of Christmas EPs, 2006’s Songs for Christmas, Vols. 1-5. There’s no accounting for the necessity of any of his projects, which frees Stevens from the burden of expectations but increases the need for self-editing. Silver & Gold: Songs for Christmas Vols. 6-10 is an excellent candidate for culling, its highs diminished by half-baked and inconsistent lows.

The songs on these five EPs can easily be classified as either traditional carols—subcategorized as Christian or secular—or his own semi-sweet originals. Enjoyment of this massive box set is certainly predicated on your interest in artistic process as much as ho-ho-hos: Stevens is clever and ambitious, but self-indulgent. Is his goal to write a classic Christmas song or simply to chew endlessly on the entire back catalogue of holiday music in as detached and semi-ironic a fashion as possible? Even the sheer volume of these releases offer an absurd counterpoint to the traditionally concise Christmas song. (Seriously—how many carols do you know beyond the first verse?)

Volume six, Gloria, is traditional Stevens of the Illinoise era, replete with banjos and flutes and choirs, his originals mimicking the 17th-century carols he covers. It is warm and pleasant, notable for Baroque deep cuts like “Coventry Carol” and “Go Nightly Cares” that few others would touch with a ten-foot candy cane. Volume seven, I Am Santa’s Helper, takes a leap with the electric guitars and laser-beam vocalizing of “Happy Family Christmas.” Across the records, such originals are immediately distinguishable by their length—up to 15 minutes in some cases—and for melding unusual styles, as on the gondolier rowing “Barcarola (You Must Be a Christmas Tree).” But primarily you will know them by their dysfunctional family narratives. If not for chorales of “Christmas” and the like, most of these originals would fit on a traditional Stevens album, though one would hope a few would end up on the cutting room floor. Perhaps “Mr. Frosty Man,” the best approximation of a David Bowie holiday original, could be the first?

In contrast, the carols become group affairs, drunk on egg nog, as the originals veer into psych-rock territory. Though unremarkable on the whole, I Am Santa’s Helper contains the original with the most potential to endure. “Ding-a-Ling-a-Ring-a-Ling” employs the facile rhymes and repetitive refrains of Christmas pageant staples “We Wish You a Merry Christmas” and “Must Be Santa.” “Let’s do a real song,” Stevens says at the end.

Christmas Infinity Voyage, the eighth volume, is downright weird. Beginning with a modernist interpretation of “Angels We Have Heard on High” that compares the Star of Bethlehem to a UFO, we are treated to Age of Adz-era Stevens, heavy on the electronica, ably blurring the lines between the traditional hymns and secular music. On a ticking extended version of “Do You Hear What I Hear?” he warps the song to his own shape, then winks cheekily at Peter Frampton as he interposes auto-tuned arpeggios of “Do you feel like I do?”

As a love song for the season, “Christmas in the Room” works wonderfully, delicately sentimental in that way that lets us forgive some of Stevens’ more gratuitous indulgences… like the synth-and-drum-machine version of “It Came Upon a Midnight Clear” that probably could have been left in 1987. At least “Good King Wenceslas” has a strangely deep, layered electronic orchestra to recommend it. Voyage radically departs from the traditional sounds of the season and doesn’t traffic in a disingenuous deconstruction of Christmas music as the cause of holiday sadness. Coupled with, inarguably, the best original of the collection, Voyage is by far the most successful EP.

By volume 9, Let It Snow, Stevens cedes lead vocals on several consecutive songs to the likes of Cat Martino and the larger chorus. Apparently even he is tired of his shtick, and some two hours into a three-hour box set, it is a welcome change. Still, the woodwinds and sleigh bells backing “Holly Jolly Christmas” work well despite the dour vocal performance. Finally, volume 10, the absurdly titled Christmas Unicorn, features an R&B-tinged “Up On the Housetop” and more well-arranged instrumentals. Regrettably, its equally absurd title track seems intended as some cultural commentary on Christmas. It never quite comes together and it never seems to end.

For good reasons, most artists record one holiday album, as much a cash grab as a spiritual expression; nor do they tend to be so damn morose. Truly, Stevens’ talents lie in instrumental arrangement, which is nearly flawless throughout the 59 tracks, and melancholic lyricism that proves less successful. In one sitting, the collection feels more like a post-Thanksgiving bout of overstuffed regret than the sort of seasonal warmth sought in Christmas music. He may want to explore his complex feelings about Christmas (and I admit to owning his collection of outtakes, The Avalanche) but the process proves less interesting than a concise final product would be. Cherry-pick songs from this album for your holiday playlist, lest you find yourself trying to explain to Aunt Sharon why a 37-year-old man has been yelling, “I’m the Christmas unicorn!” for the last ten minutes. Happy holidays indeed!