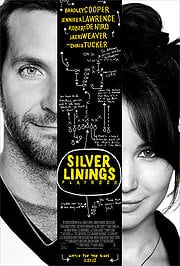 [xrr rating=4.5/5]Sometimes it is difficult to parse true critical reaction from the gut-punch of poignant nostalgia. But sometimes a film truly penetrates the fiber of a place, bringing sensory and emotional associations roaring back where, for a moment, you are no longer in the cinema but transported back to a place that was formative and important. It rises up from the murk of memory and there you are again at the pizzeria or walking down South Street or battling the drunken hoards outside an Eagles game.

In Silver Linings Playbook, David O. Russell sets his dysfunctional love story against a working class neighborhood in Philadelphia and he totally nails it. It makes sense to use Philly, a city that has long made up for its second banana status (NYC is only two hours away) by being gritty and aggressive, especially when telling the story of Pat (Bradley Cooper) and Tiffany (Jennifer Lawrence). Pat has just been released from a mental institution in Baltimore, his bipolarism off the charts after he catches his wife fucking around. Tiffany is a young widow who makes up for the loss by banging just about anyone. The script is pure formula, but dammit it works. Russell has made not only the year’s best romantic-comedy/drama. He’s crafted one of the year’s best films.

Russell has established himself these past 15 years as a weirdo director who can work within the Hollywood system, making crowd-pleasing films without compromising his vision. But while I Heart Huckabees (2004) saw him go maybe too far into the weird, he made an intelligent and somewhat mainstream return in 2010 with The Fighter. Of course, the man has a reputation for being a complete asshole (abusing Lily Tomlin on set and getting into fisticuffs with George Clooney), but who said great artists have to be nice guys?

Pat is still reeling from the loss of his wife when he returns to Philly to live with his doting mother Dolores (Jacki Weaver) and father Pat Sr. (Robert De Niro). While Dolores tries her best to please both Pats, it doesn’t take long to realize the apple doesn’t fall far from the crazy. Banned from Eagles games for life for fighting, Pat Sr. runs a bookie business out of his home and cares about little more than football and saving money to open a cheesesteak shop. Like his son, Pat Sr. is an emotionally stunted man, someone who uses his fists before words. It is De Niro’s finest role in decades, filled with quiet rage and hilarious quirks (the remote controls have to be set just right for the Eagles to be victorious).

Faced with newfound freedom (he has lost his job as a teacher), Pat returns home determined to win back his ex-wife Nikki (Brea Bee). Unfortunately, not only is it apparent to everyone else that Nikki has moved on, she also has a restraining order out against Pat. Silver Linings Playbook may be a comedy, but it also takes a frank look at mental illness. Pat is a walking time bomb, unable to understand that Nikki is afraid and wants no part of him. Whenever he hears their wedding song (“My Cherie Amour”), for example, Pat goes absolutely ballistic and falls into violent rages. It seems he may have to go back to the mental institution.

But things are bound to change when Pat meets Tiffany, the wayward sister of his best friend’s wife. They take an instant dislike to one another, but we know how the story is going to play out. And somehow, Russell makes it happen without pandering to the lowest common denominator. He even somehow works dancing into his film. Take that, Step Up!

Cooper, Lawrence and De Niro all reach out and kill the plum roles provided here. Cooper proves he can move beyond broad comedy and sexy magazine spreads, playing Pat as a nuanced and troubled soul. Lawrence continues a streak of strong roles with the brash and foul-mouthed Tiffany. But it’s the vulnerability that both actors instill in their roles that pushes the performances and Silver Linings Playbook into greatness. Beyond the violence and profanity, there’s a profound and broken hurt motivating these characters and Russell helps us get to that humanistic heart. We may find some of their actions reprehensible, but it’s impossible not to cheer for them.

If anything keeps Silver Linings Playbook from reaching classic status, it’s Russell’s last minute fumble with Pat’s mental illness. In the movies, love is a panacea, but for a film this richly textured, it’s hard to believe that a budding romance is enough to fix problems so profound and deeply entrenched. But in a genre filled with dumb and audacious situations, Silver Linings Playbook is heartrending, heartwarming and filled with laughs that stick in your throat. It’s formula, but sometimes the best movies know how to work with conventions and make them seem new again.