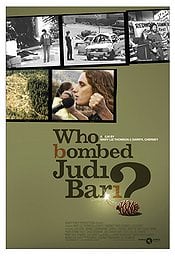 [xrr rating=3.5/5]Judi Bari, the titular subject of Mary Liz Thomson’s documentary, remains a tangible presence in the field of environmental activism and a strong voice for Constitutional rights despite her death from cancer 15 years ago. In 1990, seven years before her diagnosis, Bari made national news after being horribly injured when a bomb ripped apart her car as she and activist-musician friend Darryl Cherney drove through Oakland, California. With the bomb placed directly under the driver’s seat, Bari was lucky to survive, yet the FBI and Oakland Police immediately suspected the two activists of transporting explosives which accidentally deployed; essentially, they claimed the duo had bombed themselves. No other suspects were ever entertained, and Bari was arrested as she lay injured and immobile in the hospital. All charges against Bari and Cherney were eventually dropped, as promised evidence against them never materialized, though as of yet, no one has uncovered who planted that bomb in her car.

Comprised of archival footage of news stories, protests, evidentiary photographs and news articles, the main focus of Who Bombed Judi Bari? is her 1997 videotaped deposition for her lawsuit claiming law enforcement officers had violated Bari’s and Cherney’s Constitutional rights. Bari’s testimony, given as she suffered from the cancer that would kill her just two months later, is a fascinating and compelling centerpiece to a story that still resonates loudly today.

In the 1980s, Bari joined the environmental group Earth First, focused at the time on protesting against deforestation and logging by companies like Georgia-Pacific, Maxxam and Louisiana-Pacific. As protests began to be successful, tensions grew. Corporations were losing money and loggers were losing their jobs. Soon Earth Firsters were receiving death threats, guns were brandished at them and songs were written about killing them. Bari was rear-ended by a logging truck and seriously injured, and the lack of response by law enforcement in regard to these threats became a rather dark running joke within the group.

Who Bombed Judi Bari? relentlessly exposes the mistakes and lies told by law enforcement, corporations and the media about Bari and Earth First. As the details of the bombing and immediate aftermath emerge, it becomes easy, perhaps even necessary, to distrust the FBI. It is then that the film takes advantage of this established distrust to bolster several unrelated conspiracy claims, unfortunately by glossing over the complicated details of those cases. With this brief detour away from the car bombing case, the film detracts from the facts it has worked so hard to establish and inadvertently calls into question the documentary’s actual intent.

Much of that intent, however, is to tell Bari’s whole story, her life beyond the bombing. Footage of the work Earth First and Bari engaged in is entertaining, even uplifting. It’s a fine tribute to Bari and her legacy. However, Cherney, Who Bombed Judi Bari? producer and passenger in the car with Bari at the time of the bombing, indulges in excessive focus on his own protest songs. It’s so tiresome that, by the time we see footage of a humorous song predicting law enforcement would eventually frame an Earth Firster for murder, it’s easy to miss the irony.

More difficult to miss is the coincidence of an FBI bomb school training program located near Oakland on Louisiana-Pacific timberlands. This school, headed by FBI special agent Frank Doyle, had bombed cars on their practice range just prior to the Judi Bari bombing. Almost immediately after emergency personnel arrived at the scene, Doyle and his students also arrived, Doyle videotaping Judi’s destroyed car and proclaiming it to be his students’ “final exam.” The 1997 lawsuit that Bari taped her testimony for named Frank Doyle as one of the FBI agents who violated her civil rights. After her death, Bari and Cherney won that lawsuit. If the name Frank Doyle sounds familiar, it should: For several years, he’s been the lovable resident bomb expert on the TV show “Mythbusters.”

The attack on Judi Bari and Darryl Cherney has never been seriously investigated, though Who Bombed Judi Bari? hardly seeks an answer to its titular question. Bari’s colleagues and friends decided long ago who was responsible, as the almost subliminal design choice of highlighting an F, a B and an I on the poster will attest. Yet Bari’s legacy is well established by the film, not only in her role of fighting for her Constitutional rights, but also in showing that her once-radical beliefs about issues such as climate change are now widely accepted, the stuff of sitcom jokes and late-night talk show banter. After charges against her were dropped in 1990, “Who bombed Judi Bari?” became a catchphrase in articles and newsletters asking serious questions about the case and its aftermath. Today, 22 years after the bombing, there is still no answer.