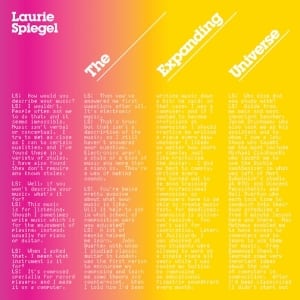 [xrr rating=4.25/5]Launched on September 5, 1977, the Voyager 1 space probe is now over 11 billion miles away from the sun and, within a year, it is expected to exit our solar system altogether. On board the tiny spacecraft is the so-called “Golden Record,” a gold-plated copper phonographic recording containing 116 images of Earth, greetings in 55 languages, a variety of human and natural sounds, and 90 minutes of music. The musical samples include not only extracts from the Western classical canon (Bach, Beethoven at al.) but also various examples of indigenous folk music, some early jazz and Chuck Berry’s “Johnny B. Goode.” The aluminum jacket contains a stylus and hieroglyphic playing instructions are etched onto the cover, should it one day be found by an intergalactic DJ. Selected by a NASA committee chaired by Carl Sagan, it was admitted the likelihood of it being found and played were remote indeed: “The spacecraft will be encountered and the record played only if there are advanced space-faring civilizations in interstellar space,” Sagan remarked. “But the launching of this ‘bottle’ into the cosmic ‘ocean’ says something very hopeful about life on this planet.”

One of very first sounds any such aliens will hear will be Laurie Spiegel’s computer realization of Johannes Kepler’s “Harmonices Mundi, “or “Harmony of the Worlds.” Kepler’s 1619 treatise demonstrated that the planets of our solar system not only have elliptical (rather than circular) orbits. Moreover, the semi-mystical Kepler postulated that the ratios of these orbits constituted a literal “harmony of the spheres” audible only “to the ears of God.” Mapping frequency (pitch) to these planetary orbits, Spiegel utilized a sophisticated computer system developed at Bell Labs to render a version of Kepler’s theory audible to human ears. The various pitches “orbit” at a rate of 20 seconds per year for 10 minutes and 40 seconds (representing the period 1977 through 2009) and the fleeting consonances and grinding dissonances are chillingly cosmic to listen to, like the wailing of interplanetary sirens. While this sort of time-based processing was integral to Spiegel’s groundbreaking computer music, it is not actually representative of what her original work sounds like—who knows what a space creature would make of it.

Spiegel studied composition at Juilliard but her roots are in folk music, resulting in a fellowship at the H. Wiley Hitchcock Institute for Studies in American Music. She grew up in Chicago but was smitten by the banjo at an early age and spent her youth learning old songs and singing crude mountain harmonies with her sister around the kitchen table. Spiegel only learned to read and write music at age 20 but was soon putting herself through school by composing soundtrack music. While on a visit to Morton Subotnick’s Greenwich Village studio in 1969, she encountered an electronic synthesizer for the first time and immediately fell in love. Rather than notating musical events on a piece of paper for someone else to someday perform, now she could directly manipulate the physical substance of music, the sound itself. Even so, she quickly became frustrated with the limitations of the primitive analog instruments – their instability of pitch, lack of memory and the tedious tape editing processes necessary to compile a finished piece of music. Computers were in their infancy in the early 1970s and Bell Labs had devoted considerable resources into open-ended research and development, allowing Max Mathews and F.R. Moore to design the Generating Realtime Operations on Voltage-controlled Equipment system, or GROOVE. Ah, the ‘70s! Utilizing a huge 3C DDP-224 General Purpose Computer (with a whopping 32k of memory), the multi-room, hybrid system allowed direct interaction with the digital and analog parameters of music in realtime, from a central control room. Using various knobs, buttons, a three-octave keyboard and a joystick, Spiegel played the GROOVE system like a banjo and her first compositions for computer were descriptively titled, “Appalachian Grove” (1974).

Mainstream classical labels wanted nothing to do with her so she turned to the small, independent folk label, Philo, for her first LP, The Expanding Universe, which was released in 1980. Now reissued on Unseen Worlds in a greatly expanded 2 CD edition, it contains over 100 minutes of additional music created at Bell Labs using the GROOVE system. In the extensive liner notes, Spiegel writes about the importance of “Appalachian Grove”: “It embodies two breakthroughs of the early 1970s: composers breaking our art free from the post-Webernite atonal aesthetic, and the first use of digital logic systems for realtime interactive music-making.” Elsewhere she fulminates against the “arrhythmic, non-melodic, often academic-sounding, overly cognitive ‘contemporary music’” while also distancing herself from so-called “minimalism” and “ambient” music, with which she has sometimes been compared. Indeed, the 28-minute title track could be cursorily mistaken for a simplistic drone piece but as she points out, “This is music for concentrated attention, a through-composed musical experience.” Even at its most abstract and intellectually challenging, Spiegel’s music was always tonal, melodic and musical in a way that was out of step with both uptown serialism and the downtown minimalists. At times, it sounds like high-tech folk music.

Writing her own code in FORTRAN IV and DAP II 24-bit assembly language, Spiegel used the GROOVE system to explore compositional strategies that would otherwise be impossible: “abstract variables, probability curves, number sequence generators, ordered arrays, specified period function, and other such musical parameters as were not, at the time, available to composers on any other means of making music in realtime.” But there was a tradeoff for this compositional flexibility: a severely limited sonic palette consisting of five sawtooth oscillators, voltage controlled amplifiers, various analog filters, one plate reverb and a primitive mixer. Consequently, all of the pieces have a similar timbral quality but Spiegel makes the most of it. She discovered that sending a sharp transient attack to one of the resonant filters resulted in pitched percussion sounds which she uses to great effect on pulsating, polyrhythmic pieces like “Drums” and “Clockworks” (1975). Elsewhere, gentle modal melodies are morphed and reconfigured as on “Patchwork,” (1974-76) “Appalachian Grove,” “A Folk Study” (1975) and “East River Dawn” (1976). Probability theory is applied on “The Unquestioned Answer” (1974), where notes are added to a phrase in increasing and decreasing frequency by pressing buttons on a telephone keypad. Elsewhere, metrical modulation is used on “The Orient Express” (1974) to create the illusion of perpetual acceleration. On “Wandering in Our Times” (1975), Spiegel manipulates a microtonal, 64-note scale in realtime, while adding thunder noises by tapping on the plate reverb unit. “Number was to the computer what voltage had been to the analog synth,” she writes, “but with numbers, all the musical potential of logic and math opened up.” With the interactive GROOVE system, Spiegel also added an intuitive, human element, giving these mathematically intensive pieces a warmth and accessibility absent from most computer-generated music, even (especially) in our own digitalized age.

It is estimated that it will take Voyager 44-thousand years to reach the nearest star system, by which time the Earth and its inhabitants may well be long extinct. But perhaps, one day, some distant beings will fetch the “Golden Record” from the ocean of deep space, listen to Laurie Spiegel’s rendition of “Kepler’s Harmony of the Worlds” and understand its meaning. Maybe they will learn of the beauteous bounty of our planet and mankind’s greatest achievements and all will be redeemed. In the meantime, we should be thankful to Unseen Worlds for making Spiegel’s seminal computer music available once again. The Expanding Universe shows one pioneering woman’s melding of art and technology to create something approaching the eternal. It sounds as fresh and timeless today as it did 30 years ago and will likely remain so 44-thousand years from now.