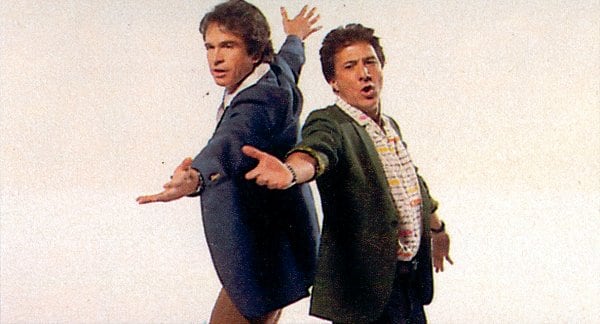 Any of Elaine May’s four directed features could conceivably be the subject for an article on an underrated movie. Even her most well-regarded feature, The Heartbreak Kid, lacks a in-print DVD release, and just about any contemporary review of her directorial efforts made sure to mention time and budget overruns. None of her films suffers as badly from this wholly uncritical criticism, though, as Ishtar. Not that all pans came out of nowhere: an homage of/update to old Bob Hope/Bing Crosby Road to… films, Ishtar resurrected a form of comedy May herself helped kill, instantly dating its humor and letting some of its bigger set pieces hang perilously in a void.

But at the risk of sounding too much like an apologist, Ishtar’s moments of dead air are not only planned but some of the film’s funniest bits. Ishtar opens on a stutter, as hack songwriters Lyle Rogers (Warren Beatty) and Chuck Clarke (Dustin Hoffman) attempt to nail down a line for a new song. “Tellin’ the truth can be bad news” they flatly repeat as if intoning a chant, occasionally adding the smallest burst of off-key instrumentation as they start changing up what exactly “tellin’ the truth” might be, climaxing in the phrase “a bitter herb.” These two are so awful they almost loop back around into a kind of Captain Beefheart-esque genius, a feat matched by their alienating live performances, in which their singing voices crackle and fade as if their vocal cords were made of Swiss cheese and instruments are more or less there only for the off chance they might intercept something thrown at the duo.

On their own, Rogers and Clarke are funny in May’s lacerating way, compounding her usual attacks on nebbishy losers with the added critique of the wannabe stardom. Not even a decade’s worth of hapless dreamers being mocked on “American Idol’s” tryout rounds can dilute the impact of the pair’s excruciating songs, and their self-justification—Rogers literally talks his suicidal pal off the ledge with the earnest reassurance, “It takes a lot of nerve to have nothing at your age!”—anticipates the coming boon of comedies that celebrated the slacker man-child. 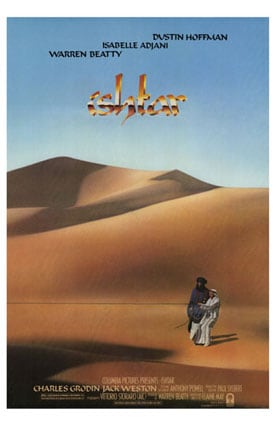 Of course, the film truly gets underway (some would say, goes off the rails) when the two find themselves in the Middle East when their inexplicably acquired agent (Jack Weston) sends them to Morocco to entertain the troops. As if the men and women of our armed services don’t have it rough enough already. Yet it is here that May’s parody of Hope/Crosby vehicles finds its satiric footing, with Rogers and Clarke soon swept up by a revolution in neighboring Ishtar as their safety zone is simultaneously broken down and reinforced in equal measure. Before long, they find themselves being used by both left-wing radicals hoping to unseat the tyrannical emir and the CIA who want to keep that cooperative emir in power. That Charles Grodin plays the CIA agent who recruits and dupes them is the first indication, later unmistakable, that the intelligence agencies involved in literal kingmaking are as stupid, oblivious and self-centered as the two morons they eventually conspire to scapegoat to cover their own sloppy tracks.

Because Ishtar is so much bigger than May’s usual efforts, her aesthetic contributions had to rise to match. Vittorio Storaro’s cinematography is characteristically beautiful, but May twists many contributions into something garish in order to serve the comedy. An establishing shot of the embassy where Clarke must go to replace his passport briefly reveals soldiers standing behind Czech hedgehogs preparing for war. Over the shot, May plays the whining of the two men in a fuss that the turmoil might ruin their gig. The darkness of that joke is magnified later when the emir warmly greets Grodin’s operative in his palace as, off-screen, the sound of firing squad rifles outside reverberate around the wide space of the deep-focus shot of the hall. May’s greatest feat, though, may be the interminable running gag of the blind camel, acquired through a mishap of spy codewords. May holds agonizingly on shots of this camel, roaring in pain (it has a bad tooth) and aimlessly wandering around infinite desert. Well before “The Simpsons” made its “rake gag” into a byword for a joke repeated well past the point of freshness until it became golden again, May used that damn camel to rip an audience’s patience to shreds.

Through it all, though, Ishtar pursues the ideas common to May’s films. Her movies tend to condense the patriarchy of American society into the avatars of individual wretches so pathetic that they make the power structure they embody absurd by association. In The Heartbreak Kid, Charles Grodin’s attempts to bend women to his views and desires is thwarted by the humanity and willpower of those who will not allow themselves to be subsumed into this idiot’s perspective. Mikey and Nicky uses the fracturing friendship and tugging leashes of hood duty to force men to turn their minuscule amounts of power on each other and thus cancel out the other. Ishtar turns the inward back onto the outside world, and all the discomfort May’s characters typically engender expands to fill the extra space. If that makes Ishtar all the harder to bear, that is only because it lays plain the global implications of American social behavior, and the stupid, manipulative bullies of May’s other films becomes the stupid, manipulative bullies of the world.