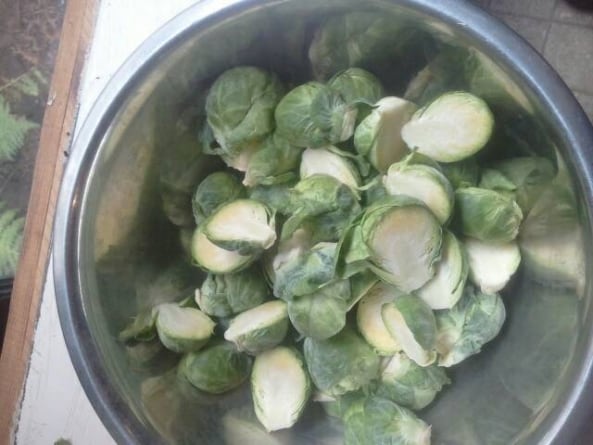 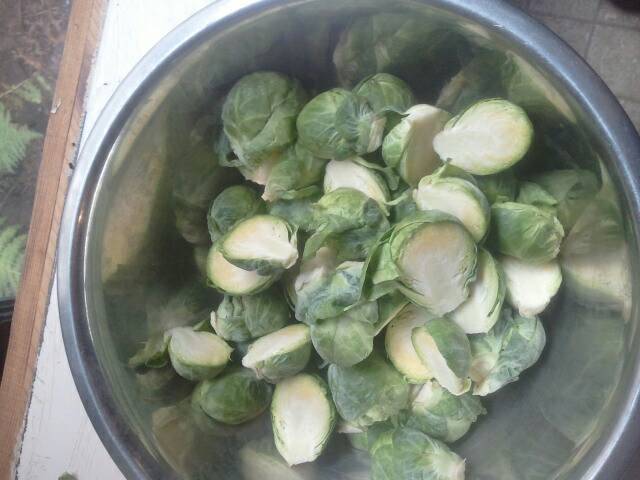 About eight years ago, a friend of mine called me out of the blue and invited me to his new business to join him and his partner for a Hanukkah meal. I don’t remember many details from that night, but what stuck with me were two things. Hanukkah is about rebirth and forgiveness; about rekindling friendships and love. My friend and I rekindled our friendship from that night and saw each other weekly for about five or six years.

The second thing I learned was this: Brussels sprouts are absolutely delicious.

I was fortunate enough to not have Brussels sprouts ruined for me as a kid. I’ve never had them steamed or boiled, or any of the other horror stories I’ve heard about them. In fact, this Hanukkah meal was the first time I had them. I don’t remember anything else on the table, but I’ve been recreating those ever since. They were salty, crispy and absolutely delicious.

Many grocery stores have Brussels sprouts on the stalk right now, and as a Northwesterner, I always appreciate this. Not only for the memories, but for the recognition that you can eat well, eat locally (Brussels sprouts are grown in Washington and California) and eat seasonally well into the colder, rainier months. The bounties of the season are numerous, with kale, broccoli and cranberries also thrown into the mix. But by Jove, if you’ve never had great Brussels sprouts, you’re in for a treat!

My recipe is an alteration from the Hanukkah version, and includes reheating instructions, bacon fat and bacon. Not Kosher.

Lemon juice from one or two lemons

Lemon rind, sliced into twists from the squeezed lemon

1 sprig fresh rosemary (it is in season)

Reheating/refrying: 2 Tbsp lard/schmaltz or other oil for frying; or fry up 4–6 slices of bacon and use the bacon fat for frying.

Pyrex glass 15×10” baking dish (or something that will fit all your sprouts in it); a cookie sheet works as well

Colander (if not on stalk)

While the oven/grill is heating, prepare your Brussels sprouts. Wash them; take them off the stalk with a paring knife. If they’re already off the stalk, toss them into the colander and give them a wash. Take off the outer layer of any sprouts that may be dried out, yellow or hardened. Pile up your sprouts into the Pyrex dish. Chop up your garlic, remove rosemary from the stalk and coarsely chop it.

Cut the sprouts in half, vertically so that you’re bisecting the part that met up with the stalk, and toss them in the bowl. Douse the sprouts with the lemon juice. Let them sit for five minutes.

Add the salt, garlic, rosemary, pepper. Liberally glug on the olive oil so that the sprouts are covered and won’t dry out. Mix this around by hand. The trick is to have enough oil on the outside so that when they bake, they won’t dry out. Add the sprouts to the Pyrex and top with the lemon rind.

Bake sprouts for 20–30 minutes until browned and soft. If you’re using bacon fat, fry up your bacon in the skillet on medium heat and set the bacon aside; reserve the fat for frying.

(This part is optional if you’ve gone the grill route.) Now, we come to the part where we do our charring or reheating (if these are leftovers, this is the only way to reheat them properly).

Add the lard/frying oil (or the reserved bacon fat) to the skillet and turn the heat up to high. Once the oil is hot, add sprouts to sufficiently cover the bottom of the skillet. Cook them for 5–8 minutes until the sprouts, garlic, and lemon become crispy. Do this in batches until you have enough for one sitting; set the rest aside to be refrigerated and refried later.

Finish with pepper to taste. Crumble up the bacon and add to the serving dish. Feel free to pinch on more salt, especially if using smoked salt. The lemon rind is practically candied at this point; make sure everyone gets some. Enjoy with friends you haven’t seen in a couple of years.