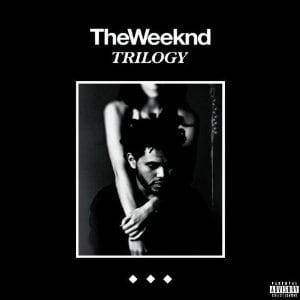 One thing you can say for Abel Tesfaye: he’s a man with a plan. In the space of a single year, the R&B singer/producer managed to release three full albums of free music that captured the blogosphere’s attention, interest and eventual adoration. For at least a few months of 2011, it wasn’t even entirely clear who was behind the dark beats and smoothly pained vocals of their first release House of Balloons. Once his name and collaborators (most notably producers Doc McKinney and Illangelo) became more common knowledge with the follow up Thursday, he still managed to remain aloof and mysteriously, rarely performing live and visually embodied by cover photographs that straddled the line between self documentation from indulgent party goers and eerie dream imagery. By the final release of what’s now being described as Trilogy, Tesfaye has fully transformed from online oddity to emerging R&B superstar. That sort of thing doesn’t happen by accident.

And nor does the music being rereleased on Trilogy. Musically, it’s buoyed by slow digital drums and vast swathes of electronic sound that sometimes coalesce into something as mundane as a treated electric guitar or remain vague and ominous. And ominous is an appropriate term; this is an album devoted to the darker edges of R&B, a genre long dominated by sexuality and emotion.” The same precision that Tesfaye and his producers brought to their music is displayed in the remastering and packaging of Trilogy, but the real question here is, why? Since all three albums were initially released for free online and are doubtless easy to find in the original version, who is the market for what is essentially the same music?

Granted, the already intense sonic atmosphere of the three albums has been improved by the remaster and three new songs (one per release) have been added. But even upon the first release of Thursday, I had already commented that “Lyrically, the Weeknd essentially changes nothing from their previous release, still obsessed with carnality and debauchery. Considering that Thursday is apparently intended to be the middle installment of a trilogy of releases (the next, Echoes of Silence dropping sometime this autumn), that’s not surprising, but it can grow exhausting.” The three bonus tracks, (respectively titled “Twenty Eight” “Valerie” and “Till Dawn”) don’t do anything the already existing songs didn’t do, either musically or lyrically; they don’t illuminate any new aspects of Tesfaye’s music, which is not to say they’re inferior; frankly, at least the case of Echoes of Silence, it interferes with the carefully plotted song order. So again, who is this for?

The simplest answer is that it’s most important to the Weeknd as a name and Tesfaye as a singer. While the adoration of internet critics and year end lists can be fantastic for building buzz (and certainly Tesfaye worked that to his best advantage), becoming a commercially viable singer on a major label is clearly the next step. By enhancing his work and releasing Trilogy, he makes a case for the Weeknd as a group that can be marketed and sell albums, not simply intrigue listeners with free downloads. Small changes, like a few presumably legally or financially difficult samples being removed, would also seem to indicate that Tesfaye’s next move is to become attractive to casual listeners (and labels), not just blogosphere listeners.

And I don’t see this as a bad thing. The singer and producers behind “High for This” and “Initiation” are unlikely to simply shift into generic club music or radio friendly lyrics. Throughout 2011, they showed impressive ambition with their music, subtly hinting at themes and lyrics that coalesced into what can be seen as a three album long narrative of torment, sadness and really good drugs. Few groups show that much vision (dark as it is), let alone the kind of work ethic and talent to pull it off. While Trilogy doesn’t add much to that, it does act as a finished product, the culmination of Tesfaye has been working for this whole time. At least as that, it justifies itself.