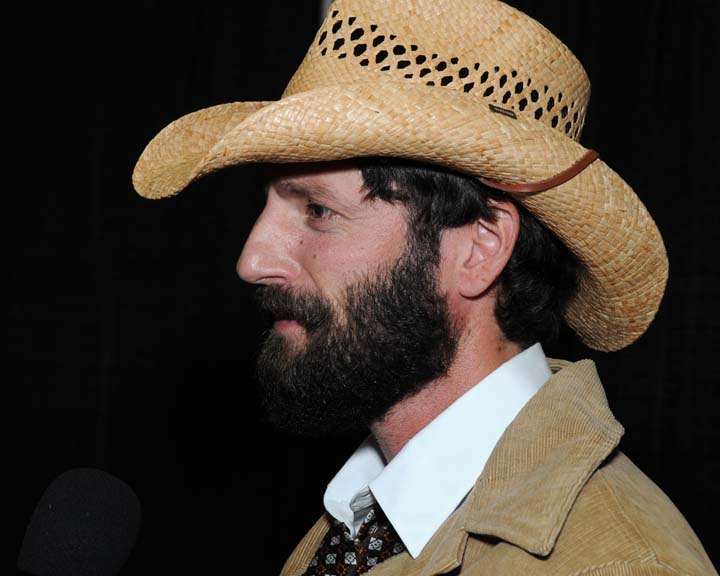 DAR Constitution Hall in Washington, D.C. is a strange venue. Known as much for gymnasium-quality acoustics as its historic location, the 3,700-seat hall also draws a crowd more boisterous than its austere setting would suggest. Thus it is not necessarily my first choice for an “intimate” performance by an artist like Ray LaMontagne, New England’s gravel-voiced bluesman. But he did his damnedest to make it look and feel personal.

The broad stage was shrunk artificially by a backdrop of wooden doors arced across center stage. Wooden crates, a side table and a hat rack dangling a cream-colored Stetson created a tentative intimacy in an inherently anonymous set. Delayed slightly, the show began about 20 minutes past 8:00 p.m. on a chilly Friday night in the nation’s capital. LaMontagne strode on stage followed closely by guest bassist and sartorial counterpoint Zach Hickman—the former bearded and slightly wrinkled overall, the latter sporting a bowtie and well-groomed mustache. Despite their visible differences, Hickman was the exact man to complement LaMontagne’s performance. Whether whistling gently, strumming a ukulele or harmonizing with LaMontagne’s husky tenor, he perfectly linked the bass lines to the lead vocals. Opening with “I Still Care For You,” LaMontagne prepared fans for an evening of his warm whiskey voice over smooth double bass lines and Hickman’s occasional harmonies. LaMontagne poured fan favorites and deep cuts into our open mouths, holding our rapt attention through “For the Summer” and “Old Before Your Time”. His uptempo rendition of “Trouble” may surpass the original, though he will be hard-pressed to write a better blues song, let alone one more perfectly suited to his melancholic timbre. The rapturous applause was repeated during “New York City’s Killing Me” as D.C. residents ribbed their rivals.

Despite being held in the sort of mid-sized venue that encourages inter-song whooping and anonymous requests, LaMontagne maintained order by strumming idly between songs and occasionally telling endearing stories about his early career. Though he seemed more comfortable letting the songs speak for him, he recalled recording his first demos and how much he hates England. His voice is higher and thinner than would be expected given those old soul vocals on his recordings, but he shares the same unfaltering romanticism of his songs. No moment more endeared him to fans, though, than when he blanked on the lyrics to “Empty” and asked, “Quick, what’s the next verse?” The crowd happily cued the last lines for him as he giggled through the rest of the song. To joyful cheers, he apologized, blaming an excess of lyrics and a history of pot smoking before launching into a boisterous duet of “Repo Man.” Though ostensibly stripped down, the foot stomper could have been hailed by Berry Gordy himself, so strong were its Motown riffs.

After crooning through “Gossip in the Grain,” LaMontagne laid his guitar aside, donned the cowboy hat and exited to a standing ovation. His brief encore of “You Are the Best Thing” and “Like Rock and Roll and Radio” ended the night on a note as warm and relaxing as brandy by the fire. Though LaMontagne primarily operates in the key of “low”, he knows what his fans want in a performance and he delivers.