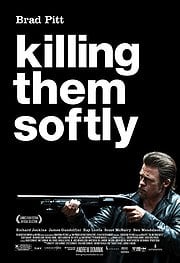 [xrr rating=2.5/5]Awkwardly buoyed back and forth by brutal violence and hamfisted political commentary, Killing Them Softly resembles the unsavory aspects of America culture it attempts to criticize more often than not. Distasteful elements—a conversation about dog-fucking or a crunchy, bone-cracking beatdown—flit in and out of the film without much explanation, but what’s objectionable in the film isn’t its hesitant, barely existent censoriousness but the confused attitude director Andrew Dominik adopts towards the film’s shock material, at times revolting but mostly just thuddingly dull. From the first sequence, in which a man’s druggy yet purposeful gait is matched with the audio of a Barack Obama speech glitchily interspersed with the film’s opening credits, it’s clear that Dominik is making grand statements. But it’s also clear how painfully hard he works to shake this weightiness off at every turn, and in many ways, Killing Them Softly raises the question of whether or not, and to what extent, it’s possible to make a gritty, joyously ignorant genre picture anymore, the kind that says more about individual acts of crime, for example, than about what more abstract concepts these acts may metaphorically represent. After all, Killing Them Softly clearly commits to its analogy linking crime and capitalism, but it’s never clear it says anything useful or interesting about this comparison.

Admittedly, Killing Them Softly is not without its insights. First and foremost is the idea that the class structure inherent in capitalism is embedded in American society on a very deep level, such that it reproduces itself in the world of crime even though the latter explicitly and intentionally operates outside the legal institutions that buttress capitalism. It’s possible to imagine, for instance, a crime syndicate operating according to a different paradigm for social organization, but Killing Them Softly, probably rightly, suggests that this simply doesn’t, and maybe couldn’t, happen. The most interesting aspect of Dominik’s vision is the way he hops from one social milieu to another, different cells in a larger, polluted organism. We start with Frankie (Scoot McNairy) and Russell (Ben Mendelsohn), two small-timers and drug addicts who dream of moving up the food chain. Their robbery of one of the mob’s poker games sets the entire film’s action in motion, but they are hardly the major players in this story. They are merely bottom-feeders, the starting point in a film that maps the full continuum of the crime underworld’s hierarchical, caste-like structure.

If there’s anything like a protagonist here, that would have to be Brad Pitt’s Jackie Cogan (George V. Higgins’ novel on which Killing Them Softly is based is entitled Cogan’s Trade). Jackie passes through all levels of the crime world while remaining curiously outside it, often repulsed by the way people do business but nonetheless dead-set on earning his living through it. He frequently meets with an unnamed man (known in the credits only as “Driver”) played by Richard Jenkins to discuss business. Driver is well-dressed, almost refined, especially in comparison to the mangy Frankie and Russell, but he serves as a reminder that class differences are often merely arbitrarily superficial: Driver, like Frankie and Russell, are part of the same illicit network, but one of them seems to live a comfortable life while the others wallow in the throes of addiction. Along these lines, James Gandolfini’s Mickey and Ray Liotta’s Markie represent, more or less, this world’s middle class.

In fact, while Mickey occasionally too closely resembles Gandolfini’s iconic Tony Soprano, the actor and Dominik bring small touches to his characterization and make him resemble more the average mid-level company man than a mob assassin. He gripes to Jackie about problems in his marriage and indulges too heavily in booze and prostitutes, regulating his own contentment via a steady intake of sensorial pleasures (rather like a slightly more respectable version of Frankie and Russell’s druggy squalor). But Dominik never makes the criss-crossing linkages of, say, Steven Soderbergh’s The Girlfriend Experience, which easily transcends its potentially tired comparison of a high-end escort and her high finance clients. Soderbergh’s insights in that film, or in its companion piece Magic Mike, benefited from a spaciousness that created a complex ambiguity between one’s freedom and one’s participation in a late capitalist economy that reduces everything to exchange and use.

By contrast, Dominik has all the intellectual sophistication of a petulant, moody teenager who fancies himself a rebel, holding tightly to what he thinks is his one grand, important insight. Throughout the film, he weaves in speeches and media appearances of George W. Bush and Barack Obama, the film set at the end of the former’s presidency. There is much talk of the financial crisis, and it’s not hard to figure out the connection Dominik is forging between robbery both corporate and criminal. But Killing Them Softly comes to feel like merely ineffectual rage. As something of the avatar for the film itself and its director, Pitt’s Jackie embodies the instinct, largely misguided, to remain above the fray of the society he so obviously condescends to, disbelieving that anything other than money and antisocial independence matters. Dominik mistakes his nihilistic anger for meaningful commentary in the same way he confuses wallowing in his (overwhelmingly male) characters’ vulgarity with exposing their inferiority to us. He’s a little too tied to the gangster film tropes he seeks to surmount and too attached to the very aspects of American society he wants to stand above. Killing Them Softly is merely a series of empty poses that somehow ends up being significantly less meaningful than the political speeches Dominik holds up as the embodiment of shallow discourse.