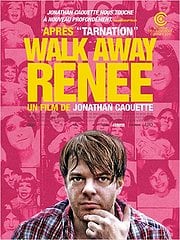 [xrr rating=3.25/5]Two of the most interesting aspects of Jonathan Caouette’s autobiographical diptych of Tarnation (2003) and this year’s Walk Away Renee is that, through Caouette’s introspectively analytic vision, his own life emerges as something deeply fascinating and, despite the personal and familial demons we witness, we never feel moved to pity him. The first point might seem obvious, but there’s no reason to think that witnessing just anyone dredge up their family’s tortured history should be compelling. Instead, it’s Caouette’s own approach to this material, at times joyously playful and at other times intensely harrowing, that makes these films interesting. Regarding the second point, this is decidedly dark stuff, and it might make you grateful that you didn’t have to go through what Caouette experienced. But as much as we might feel like placing ourselves above him and his troubled family, feeling relatively sane in comparison, there’s a deep richness of feeling in these films that is admirable and even envious. And if Tarnation was primarily a ritual of exorcism, Walk Away Renee speaks more purely of love, chronicling Caouette’s recent attempts to care for his aging, mentally ill mother Renee Leblanc. It’s not Caouette’s fault that the calm afterwards is never as interesting as the storm itself (as Tarnation easily trumps it), but Walk Away Renee deepens the director’s status as one of the more compelling individuals making films explicitly about himself.

The autobiographical nature of these films makes them feel at times like hermetic, esoteric worlds. In Tarnation, Caouette spends most of the film walking us through his life in chronological sequence. We learn about how his mother fell from a roof at age 12 and how she was given shock treatment for a prolonged paralysis that her parents either believed or were convinced to believe was fake. The details are hazy, and it’s never clear how to portion blame accurately, and this only adds to the sense of psychic burden these events imposed upon everyone involved. This is evident in Walk Away Renee when Caouette spends several minutes revisiting the same events and distilling the pertinent information to viewers who might not have seen Tarnation: it’s almost as if he cannot explain himself without explaining everything about his family. As such, there’s a slight barrier to entering this world, but every moment of exposition in either film is rewarded later on. It’s an astonishing example of an artist letting the audience into his life in a rather intimate manner.

Near the end of Tarnation, we witness Caouette’s schizophrenic mother give a brain-addled monologue about pumpkins, a grimly nonsensical manifestation of her symptomology. Caouette refuses to look away, even though moments of frailty like these are the very ones family members try to hide from the public. At the beginning of Walk Away Renee, she seems to be in a better state, and the two of them are gearing up for a journey from Houston, where Renee was staying, to a better assisted-living facility in New York, near where Caouette lives. If Walk Away Renee suffers from anything, it’s that the structure imposed on it is significantly more arbitrary than Tarnation’s efforts to simultaneously chronicle both an entire life (Caouette’s) and the disintegration of a family. The decision to tell the story of a single cross-country journey, seemingly no more special than any number of other events from this time of Renee’s life, feels artificial and inconsequential.

But Caouette is a talented filmmaker, though one who often indulges in trashy aesthetics (often to great effect, it must be acknowledged), and he has a great ability to turn the fragments of his life into compelling stories. And this trip is not just an ordinary trip, it turns out: midway through, Caouette discovers that Renee has lost her medication, including the lithium that has most successfully buttressed her against psychosis. Caouette scrambles unsuccessfully to pull strings in order to get more lithium before things start to get worse. And sure enough, they do: as they arrive in New York, Renee seems like a completely different person, shouting at Caouette and speaking nonsense. One of the film’s greatest accomplishments is the way Caouette’s camera bears witness to these transformations, capturing a single individual at points so starkly different from each other that our sense of the constancy of one’s personality completely shatters. This is ultimately what’s so disturbing about Caouette’s vision of his mother Renee: it exposes our great fear that there is no “me” or “I” underneath all of these fluctuations and that if we were ever afflicted by a mental illness like schizophrenia, we might lose our own grips on ourselves.

There’s also the less unsettling but significant shift in Caouette himself. In Tarnation, we see him as a startlingly handsome youth, but nearly ten years have passed between films and he is now older and chubbier, as if dealing with his familiar heritage has accelerated the aging process. One senses the tremendous weariness that must come from having to take care of his mother and grandparents as if he were a parent himself (and in the time between Tarnation and Walk Away Renee, Caouette also dealt with the physical and mental deterioration and then death of his grandfather Adolph). But Caouette and his mother find a very satisfying kind of redemption in the end, albeit one that is provisional, of course, like everything in their lives. Caouette takes Renee to the dentist and has her fitted for dentures, and he dresses her up in new clothes (and lets her try on wigs). In small ways, he helps her revisit better times, reminding her of the beauty she once possessed. This transformation too is quite remarkable, and by the end, Renee looks like a new person. Small things like this count a great deal, and the various ways Caouette shows his mother’s love help make Walk Away Renee an affirmation of love itself in even the direst environments.