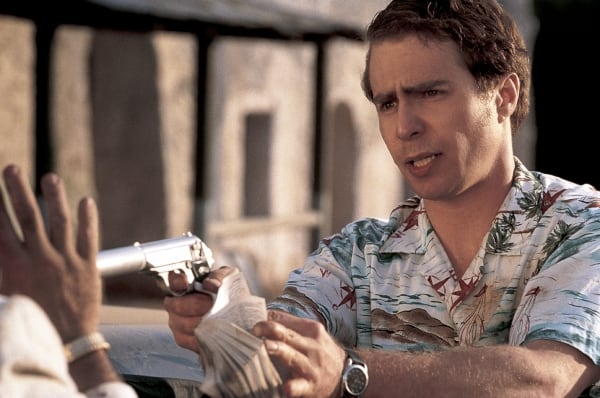 There are a number of ways you could describe Confessions of Dangerous Mind. You could describe it as a Cold War spy thriller featuring a bevy of A-list stars including George Clooney, Julia Roberts and Drew Barrymore. On paper, that seems like a sure fire box office draw. You could describe it as a kaleidoscopic, Charlie Kaufman-scripted story that splits the difference between the reality of television personality Chuck Barris’ life and his outlandish claims of being an assassin for the CIA. While not necessarily the same cash cow, still a respectable premise for a critically acclaimed film. You could even describe it as a moody character piece about a man driven by the specter of failure and psychosexual needs, played by the solid Sam Rockwell. And all of these descriptions would be accurate, while still being the same film. But none of them describe its unique combination of grim realism, colorful time period shifts and dance between truth and fiction.

Confessions was adapted from Barris’ “unauthorized autobiography” of the same name, but had a long and tortuous production history. First sold in the 1980s, it was passed from director to director and from star to star; at various points, Brian De Palma, David Fincher, Darren Aronofsky and Bryan Singer were potentially set to direct, while the lead role went through, among other, Ben Stiller, Johnny Depp, Mike Myers and Sean Penn. When the film was finally released in 2002, it emerged with first time director Clooney and a script by Kaufman, with Barris himself heavily involved in production. But despite its high concept premise (creator of “The Dating Game” and “The Gong Show” moonlights as black ops killer!) and Barris’s cooperation, Confessions is not a puff piece. Though the film sometimes flirts with the glamour of Barris’s years as a hot young TV producer and his claimed profession as a gritty, James Bond-style operative, it never misses an opportunity to show its protagonist as a profoundly damaged person, consumed by cynicism and romanticism alike.

As the movie begins, Barris (Rockwell) is holed up in a nondescript hotel room, staring blankly at a television set while naked and sporting a Howard Hughes-style beard. As the camera pans across his skinny body, a cleaning woman vacuums past him, seemingly indifferent to the vacant man holding a gun next to her. And over the scene, Barris narrates a defeated tirade on the nature of potential…and how it’s wasted. But Confessions plays fast and loose with chronology, shifting through the years of Barris’ life from scene to scene. Barris narrates his own story, describing his only chance of salvation as a human being to tell his life and find some meaning in it. His flat, deadpan voice follows the game show host/assassin from his beginnings as an NBC page and behind the scenes player on “American Bandstand” to struggling producer with a failed pilot for “The Dating Game” under his belt. 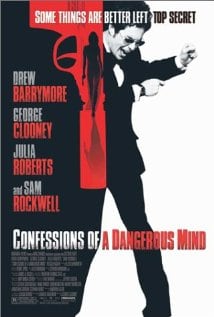 That’s where Confessions truly begins to deviate from verifiable history. According to the film, Barris is then approached by CIA agent Jim Byrd (Clooney) in the early 1960s with an offer to serve his country, primarily via shooting people he doesn’t know until they’re dead because of political machinations. Describing the plot of Confessions is a mishmash of true events (Barris’ continuing rise in the TV world and his reputation for dumbing down popular culture with highly rated trainwrecks like “The Gong Show”) and what’s less verifiable, like his claimed 33 political assassinations, dalliances with a beautiful female spy (Julia Roberts) and political imprisonment in East Germany following a bungled mission.

The film is as remarkable for how it tells the story as the story itself, which is a feat. Time periods are vividly recognizable, despite the jumbled chronology of his life, switching between black and white, saturated colors and cold, lifeless cinematography. At times, Confessions is darkly funny, like when Barris says farewell to two fellow CIA assassins at the end of training, “Lee” and “Jack,” and at others, surprisingly realistic and gritty, as in flashbacks to his drawn out, nearly failed first assassination. The movie works best when it lands between the two points and underlines the tragic hilarity of Barris’ life and his inability to be satisfied with what he has. Whether it’s his sudden gear shift from seducing a woman in the Grotto of the Playboy Mansion to being dressed down by her for his lowbrow television shows, or his clumsy attempts to convey a secret codeword to a fellow spy results in him accidentally picking up on a woman, Confessions is nearly as much an extremely dark comedy as it is a semi-biographical drama. In keeping with its straddling of reality and fantasy, many scenes show Barris reacting to flashbacks while still involved in other time periods, literally externalizing his thoughts, inspirations and crumbling mental state.

And that’s where the real pathos of Confessions lies. As much as the film apes the looks and feel of bygone decades and mines black comedy from awkwardness and state sanctioned murder, it’s still at least part of the story of a real living man. Whether or not (probably not) his CIA exploits are in any way true, Barris in Confessions is a sad, troubled man who realizes only too late in life that he will always feel incomplete. According to him, most of his life has been spent chasing sex and recognition, and the shallowness of his desires begins to take its toll on him as the film goes by. Intriguingly, the movie makes good use of real life talking heads of Barris’ contemporaries like Dick Clark and Jaye P. Morgan, commenting on the man’s erratic behavior and strange life. Confessions is a difficult movie to explain in any single word: comedy? Drama? Biography? Fantasy? Simply because Barris is.