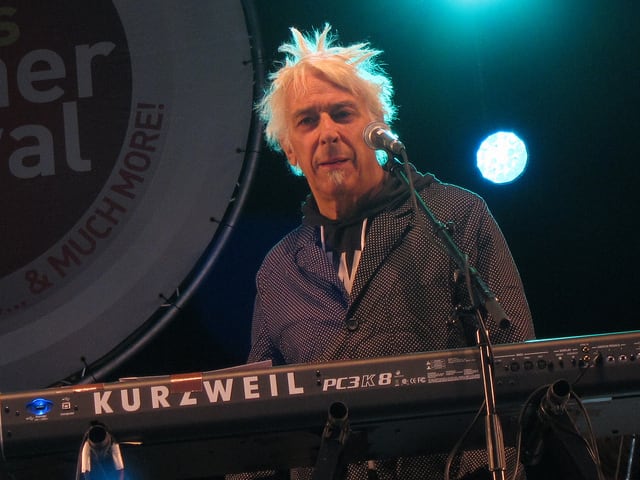 In accordance with the universal law of things being more difficult than they need to be, it was pouring sheets of rain by the time I made it to McMenamins Mission Theater in Portland to see John Cale perform. Every music snob has at least one artist they feel is deeply underappreciated and try to turn people on to; John Cale is that for me. I’ve irritated friends by forcing them to listen to Vintage Violence over and over again, got a girlfriend angry by bidding ridiculous amounts of money to buy a copy of Music for a New Society on eBay and even won a few converts over the years. So a little rain (or a lot) wasn’t going to stop me from seeing the man live in concert.

It was also my first time at the Mission, which is not your typical concert hall. For one thing, it’s a tiny theater, with a capacity for perhaps 300 people. Part of that is due to its unique set up: it’s divided into two floors, with the lower being mostly filled with tables and chairs and the upper being a balcony with theater seats and bench tables. The venue mostly shows movies, but occasionally hosts a musical performance. They also serve food, popcorn and cocktails, which became a problem as the evening went on. But more on that later.

This particular performance was the first show of the Velvet Underground member’s new tour supporting his latest album Shifty Adventures in Nookie Wood, supported by Cass McCombs. When the singer/songwriter took the tiny stage, he was received by polite but restrained applause, which he responded to in turn with a brief greeting. Supported by a three-piece band including a fiddle player, he played a set that ranged between twangy Americana and power pop, rarely giving the crowd much attention. Though his songs were undeniably pleasant, the crowd was clearly itching for the headliner; when McCombs spoke again, it was to first announce that they were almost done. The audience took that in stride, which is to say, scattered claps and more food orders.

During the 20 or minutes it took to reset the stage for Cale (I got the impression that he’s very particular about his sound mixes), I began to notice that most of the audience seemed to be taking full advantage of the menu on offer. This isn’t to say I was expecting a church-like atmosphere for a legendary musician still performing at age 70, but nor was I expecting a young man to slump in a chair next to me, open up a giant paper bag and pull out a deconstructed pho dinner during Cale’s set. In fact, for the entirety of the evening, it seemed the entire crowd was in a perpetual process of getting up, getting food, eating, getting back up to switch seats, ordering more drinks and getting up again. It was a little distracting.

But I shouldn’t complain. Cale came onstage to roaring applause, some audience members actually getting out of their chairs and cheering before he even performed a single song. For a septuagenarian, Cale looked pretty damn good. Though he tended to mutter his introductions between songs, he was full of energy, greeting the crowd cheerfully and sometimes even wagging his arms and hips with the music in a kind of dance. Flanked by his band, he launched into the music; typically idiosyncratically, he opened with a pair of relatively obscure songs, “Hedda Gabler” and “Captain Hook,” both from the dark, spittle-flecked Sabotage/Live era.

One thing is for certain: Cale has not lost any of his musical chops with time. His distinctive baritone sounded untouched by the years, coming strong and clear through the PA system, though he did shoot a few looks at his sound guy throughout the show that indicated moments of displeasure. Even during the paranoiac closing rant of “By hook or by crook/ I am the captain of this life” in “Captain Hook,” he sounded invigorated and even unhinged.

Throughout the course of more than two hours, Cale ranged through his song catalog. Though he leaned heavily on Shifty Adventures in Nookie Wood, including the apropos “December Rains” and hard-edged funk of “I Wanna Talk 2 U,” he included a number of rarities and reworked songs. “Helen of Troy” became a rough, chugging number, more straight rock oriented than the bass heavy original, and included Cale whispering, “I fucked your mother/ I fucked your brother.” “You Know More Than I Know” was relatively faithful, with Cale temporarily abandoning his Kurzweil electric piano for an acoustic guitar. For much of his performance, Cale and his band seemed to go into carefully orchestrated grooves, riffing back and forth over the keyboard melody while the singer indicated by stares when to go back to the rhythm. In particular, his guitarist Dustin Boyer carried many of the songs with a combination of lead and rhythm parts, sounding so impressively angular and forceful that he managed to take eyes off Cale at times. But no doubt about it, even at his age and 15 studio albums in, Cale carries weight on stage. Despite the hungry crowd and the general restlessness of the theater, Cale commanded attention.