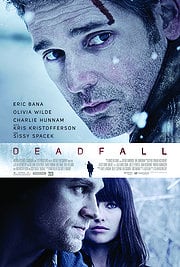 [xrr rating=3.0/5]There’s working within the conventions of an established genre and there’s laziness. Deadfall is determined to indulge in both. At times a gripping crime thriller, Deadfall too often slips into hackneyed dialogue and plot points so stale that one wonders if the script was originally intended as satire. Snappy cinematography and intense performances thankfully prevent the film from descending into complete mediocrity.

Addison and Liza (Eric Bana and Olivia Wilde) knock over a classy casino, speeding away through rural lands in the midst of a snowstorm. The couple appears devoted, but it’s obvious that something isn’t quite right between them. Suddenly the driver swerves to miss a deer, crashing the car and leaving Liza and Addison the only survivors. They separate with plans to meet up later and cross the nearby Canadian border with the remains of their casino haul.

Elsewhere, Jay (Charlie Hunnam), twentysomething former Olympic boxer, has just been released from prison. Within moments, Jay has made poor decisions and is in trouble again. Through a few well-placed contrivances, Jay hooks up with a hitchhiking Liza, and they both end up the next day at his parent’s home for Thanksgiving dinner. Local police officer and family friend Hanna (Kate Mara) finds herself there as well, and after an impressive snowmobile chase and a hefty casualty list, so does Addison. He takes everyone in the home hostage in a last-ditch gambit to escape the law.

More than just a crime caper flick, Deadfall is about the breakdown of the modern family. Dysfunction reigns in every family on screen; in fact, there is not a single moment of the film that is about anything else. Even the most peripheral characters, if they have a line of dialogue, will speak of divorce or domestic abuse or missing children. There is no room for anyone to expand beyond this theme, and it’s impossible to fully relate to any character when they behave as chess pieces moved by nothing except the whim of a single-minded screenwriter.

At times, Deadfall appears to veer toward a subtly subversive critique of a society where men consistently hinder, abuse and destroy the women in their lives, even when they only have good intentions. Hanna’s father and fellow police officers are so impressively dedicated to being misogynists that they are impossible to take seriously; if a point was intended in their behavior, it is lost in their comedically outsized antics. Though there seems to be the tiniest glimmer of a point to be made, any sociocultural critique is, in the end, simply the accidental byproduct of casting every last female character as victim. They are all indistinguishable from the stereotypical damsels in distress, lives hinging not on their own actions but those of the men around them.

Bana gives a sterling turn as the psychopathic Addison. There is real precision in his performance, an understanding of the need to move beyond well-worn tropes, to insert a little finesse and subtlety into the film and give it style beyond the blue filter and glamorous shadows. Other actors are woefully underused, such as Wilde, whose body language says more than her stilted dialogue ever could. Treat Williams as Hanna’s father, with only a string of ridiculously sexist insults and a snazzy cop haircut, breathes life into a cliched role. Unfortunately, Kris Kristofferson and Sissy Spacek, as Jay’s parents, walk through their parts with the bare minimum of effort, Spacek occasionally indulging in broad theatrics very much out of place in a modern thriller.

As Addison makes his way through the woods immediately after the car crash, he comes across an isolated hunting cabin where an abusive and drunk man chases his wife and baby out into the freezing cold. Addison insinuates himself into that family dynamic, one that so closely mirrors what we come to learn about his own life that even the little girl’s name is the same as his sister’s. It’s a scene that doesn’t set up a parallel or foreshadow anything; it’s merely clumsily executed and thoughtless pastiche. But it’s still fascinating: Bana’s performance is compelling, the cinematography is gripping and there are a few genuinely great moments of dialogue. It’s all lovely to watch but an ultimately disappointing example of how Deadfall couldn’t manage to transcend the stereotypes of the genre for more than a few moments at a time.