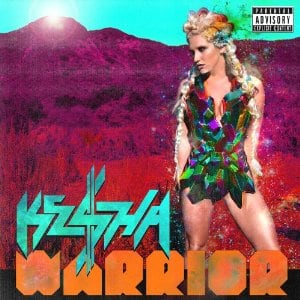 [xrr rating=3.75/5]Following on the heels of “Die Young,” the first single from Warrior, was an acoustic version of the song showcasing a side of Ke$ha she had previously, stubbornly withheld from the public, reminding us that when she wants, her voice can sound quite pretty. Those who categorically reject all but the safest, most sterilized pop, or those for whom Ke$ha’s tastelessness is embarrassingly intimidating, would love to pretend that this side of her doesn’t exist, or that she simply can’t muster up such traditional melodiousness. Ke$ha’s entire aesthetic, after all, is to reject good musical taste in the same way that a young, rebellious woman might reject combing her hair and applying makeup, wishing to remain unkempt. As such, she comes across throughout her work, but especially here on Warrior, as patriarchy’s problem child, punished by some for her strident nonconformity and cherished by others for her brazen willingness to flip those who are too serious and uptight the middle finger. Channeling the past’s rock-star edginess while revitalizing it with new sounds and perspectives (notably, a post-riot grrrl feminine consciousness), Warrior is a genuinely original album that makes its subtle points without ever sacrificing the joy at the genre crossroads of rock and dance-pop.

Ke$ha’s Animal was a deeply underrated debut, a blast of fresh air that brought a new pop star into sharp focus almost immediately. Her irreverent, though never mocking or overly self-conscious, use of rap seemed novel at the time, but today, when the boundaries between rap and pop are more blurred than ever, she seems like a prescient trendsetter. What was interesting, though, in her use of rap was the way it gave her music the bragging confidence of hip-hop, with all its masculine edge (she tells an ex-lover to “suck my dick” on “Thinking of You”), without negating Ke$ha’s essential femininity. On the back-to-basics rock song “Dirty Love” (featuring the godfather of unhinged masculinity in rock ‘n’ roll, Iggy Pop), Ke$ha comes out with enough attitude to hang with the boys, exclaiming, “You’re not my daddy” and “I’m not your girlfriend/ I ain’t never gonna be, oh, your wife.” Here, Ke$ha has much in common with not only the mischievous and naughty men of rock and hip-hop but also the numerous female blues artists from the early 20th century who unrepentantly sang about their bad behavior.

This is Ke$ha at her most brash, yes, but Warrior also expresses its mashup of feminine and masculine strength through vulnerability. On “Love Into the Light,” Warrior’s closing track, Ke$ha reflects on her resolute desire to resist domestication (“I’m sorry but I am just not sorry/ ‘Cause I swear and ’cause I drink“). This is Ke$ha at her most conventionally feminine, delivering a tender ballad performance. “Wonderland” possesses a just-barely bittersweet nostalgia (“Everything was so simple then/ Living life like our last weekend“) that was absent from the partying-in-the-present Animal and Cannibal. Somewhere in the middle is “Crazy Kids,” one of Warrior’s clear highlights. Beginning with an urgent guitar strum and some whistling, vaguely harboring a tinge of sadness in the distance, the song, like many on Warrior, alternates between more familiar rock-pop on the chorus and Ke$ha’s trademark rapping on the verses, a perfect hybrid to capture her diverse but never contradictory moods and tones.

“Crazy Kids” also refreshes Ke$ha’s signature thematic concern, a sort of intensely melodramatic celebration of youth in all of its implications. There’s a vaguely fatalistic quality here (“We don’t give a fuck/ ‘Cause that’s just who we are,” not to mention the title of “Die Young”) that serves to remind us that growing up and maturing is not always progress but also a form of death, especially when adulthood erases the younger self’s best qualities, such as the capacity for joyful celebration or enthusiastic rebellion. Much dance music pays superficial lip service to these themes, but Ke$ha’s music draws them out and pulls them into focus. And when she sings, “We are the crazy kids,” there’s also a tinge of hopeless vulnerability, as if she has forgotten how to step back from the “craziness” of a youthful life lived intensely. Throughout the song, there’s a subtle navigation between craziness perceived as an accusation from outside and embraced as an emblem of pride. “All That Matters (The Beautiful Life),” a dance-pop song fondly recalling Ace of Base, expresses this as uplift. The notion that “all that matters” is the here and now is a youthful luxury for sure, and perhaps it’s a little naive, but more than a few adults unceasingly attempt to find their way back to that lost frame of mind.

If anything, then, Warrior represents a new form of reflective self-consciousness on the part of Ke$ha. Recognizing that the embrace of one’s youthful existence is fun and potentially transformative (Warrior’s title track mixes party imagery like, “We were born to break the doors down” with a cry for “revolution”), there’s a resistance to exiting this liminal space, ultimately a necessity as one grows up. Unable to part with the youth that she will one day need to leave behind but aware that it can’t last forever, Ke$ha opts for the kind of self-annihilating catharsis found on “Die Young,” forestalling maturity forever through fantasy (“…Like it’s the last night of our lives…“). What makes her music much more than just an immature fantasy, though, is the truth she mines from these themes, recognizing that our maturation beyond youth can represent a significant loss. And in using the brash confidence she inherited from her male idols, Ke$ha has also discovered a way to be brattily independent as a woman in a society that still, to this day, strictly enforces conformity.