That the Coen brothers would adapt The Ladykillers (itself arguably a loose reworking of a 1942 film called Larceny, Inc.) is fitting and strange, given that the original Ealing Studios production almost feels like a grandfather to the Coen brothers’ work. A comedy of errors built upon a caricatured but tangible set of arrogant buffoons, The Ladykillers resembles the brothers’ ironic touch narratively and, once Alexander Mackendrick’s precise direction is considered, aesthetically. Mackendrick’s mise-en-scène splits almost evenly between low-key domestic drama, Expressionist horror and, of course, dark comedy. The revelation of Alec Guinness’ ringleader robber, “Professor” Marcus, constitutes an early crystallization of Mackendrick’s aesthetic as it powers the humor: the tease of Guinness’ shadow illuminated to reveal eyes sunken into raccoon sockets, hair hanging in mussed strings and false teeth protruding from the actor’s mouth in frightening hilarity. He looks like a hungover Rotwang, both terrifying and ludicrous as a mastermind clearly not as clever as he thinks he is. 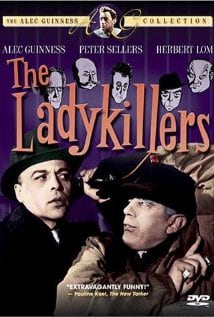 Marcus and his cohorts pose as amateur musicians to rent rooms from an old woman, Mrs. Wilberforce a.k.a. Mrs. W. (Katie Johnson), in order to plan an armored car heist. As with Guinness, the mere sight of these men (a troupe of character actors including Herbert Lom and Peter Sellers in his first meaty film role) is funny: all thick-necked hoods, they look absurd in their fleeting moments of holding instruments, and when the gullible, frail woman adoringly asks them to play for her, a look of mild panic crosses their faces. But the comedy truly begins later, after the men pull off the heist and are found out by Mrs. W. Resolving to kill her, the crooks gradually look even more comical in their appearance as their icy hearts give them pause when it comes to the actual act. Their toughness crumbles into quivering inaction and infighting as each falls dead from the pressure of killing. Amazingly, a film that began by parodying moralism ends by embracing and deepening that moralism through its mordant comedy.

In other words, the material contains all the elements the Coens might otherwise have put into it, raising the question of why the pair felt the need to adapt it at all. Perhaps that thought crossed their minds, too, for they approach the material by moving away from it. Their 2004 version replaces Mackendrick’s smoking, industrial suburbs with humid rural climes in Mississippi, a different setting made no less atmospheric by the brothers’ (and cinematographer Roger Deakins’) eyes. Autumnal browns, yellows and reds edge out the drab grayness of the original, an aesthetic precursor to the remake’s alterations. 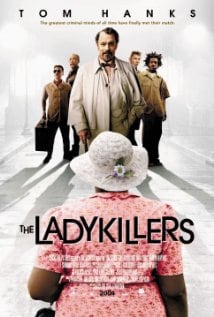 Mackendrick’s film maintains its flow by playing with the silly interactions of characters, but the Coens’ version diddles about with unnecessary excursions into each of its characters. Ironically, they emerge less-formed than the blunt, contextless presentation of the thugs in the original. By showing Marlon Wayan’s vulgar freak-outs or J.K. Simmons’ oddball cadence, the Coens do not reveal anything about them beyond their immediately apparent caricatures, and they waste time on matters that have nothing to do with the heist at hand nor the gradual escalation of tension between the robbers and the woman they so briefly dupe.

In fact, these characters feel like the sort of scorned cartoons that so many detractors reductively accuse the filmmakers of crafting in all their films. That irony runs through the Coens’ Ladykillers, a film in which they avoid most of their usual touchstones for fear of replicating the original’s charms—deadpan humor, O’Connor-esque warped moralism—and winds up the embodiment of every distilled misunderstanding of the brothers put to paper. Even the madcap comeuppance that awaits the robbers lacks the usual Coens’ touch, save the obvious but fun slapstick of Tzi Ma’s demise, complete with swallowed cigarettes, denture water and an unfortunately placed cat. Overall, however, the black-comic reckoning that befalls the suddenly guilt-stricken hoods of the original becomes mere fodder for cynical, trivial irony.

Most frustrating of all is the feeling that the Coens’ take on the material might have been worthy had they operated at their usual level. Tom Hanks’ one-man band of Faulkner character tropes could have made a fascinating, hilarious and insidious character rather than the huff-chuckling, toothless prat he ultimately is. Irma P. Hall’s wonderful performance, striking a perfect balance between trusting and suspicious, nearly outmaneuvers the reductive stereotype to which the script confines her. But lo, she falls victim to the filmmakers’ most unnecessarily sardonic treatment in her zeal to donate to Bob Jones University, a religious institution infamous for its history of racial discrimination. Even this might have been a masterstroke in a more focused movie, sidestepping the warm, personal gesture of charity that closes Mackendrick’s film with a wholesale shipment of morally tainted money to a religious school tainted by its own sins. Had the film laid the groundwork for this in any way, this Ladykillers might have scaled lacerating heights even its predecessor could not touch. Instead, the gesture feels like the final, clueless thud of the Coens’ clumsiest, least characteristic work.