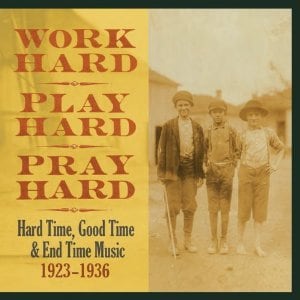 [xrr rating=3.75/5]Historians have a tough job. They attempt to understand and in a way, reconstruct what, by definition, cannot be reconstructed. All they can go by is records, which can never fully illuminate what happened when it was then and now. But in an age of information sharing like no other, it has to be a little easier. For example, the release of Work Hard, Play Hard, Pray Hard: Hard Time, Good Time & End Time Music, 1923-1936. This three disc, 42-track collection of music recorded from before the beginning of the Great Depression to its closing years certainly existed in some form or another, but only in a time in which people can package and disseminate so freely is it being heard again.

Some of these songs are beyond obscure, while others are at least known in other permutations of folk and country music. But you’d have to be a specialist to be even passing familiar with the tracks included on Work Hard. Though a few of the tracks are by repeated artists, most of the musicians included have passed from memory, with only these recordings to remember them by. Names like Snowball & Sunshine or the Carolina Ramblers may not be famous or even due for a revival, but their songs here are fascinating. As historical documents, they’re invaluable, audio recordings of a time already so distant that it will soon be gone from living reference, but simply put, it’s also music unlike anything being recorded now

Work Hard collects music that’s unburdened by self consciousness or reflexivity. While most music, particularly pop, that is produced now is a reaction to trend (or to put it more kindly, with a knowledge of musical inheritance), the 42 tracks here are simply the music of the people playing it. Each of the three discs takes a theme from the title; songs of labor, songs for celebration and songs of devotion. Taken out of order, some of the tracks would seem to not have much relation to each other. “The Beer Party” by Charlie Wilson & His Hayloft Gang is a cheerful, fiddle driven ode to the delights of drinking, while “Leave It There” by Snowball & Sunshine is a religious song primarily utilizing organ, a low chorus and occasional exhortations from a preacher. But the two are complementary in a way, two poles of a time and place in the past. For every “Oh Declare His Glory” (by the McDonald Quartette), there’s the delightful kazoo melody of “Too Tight Rag” (by the Hack String Band) and the yearning of “The Farmer’s Dream” (by Oscar Ford). It’s all part of the same puzzle.

The songs on Work Hard were discovered by guitarist Nathan Salsburg as part of a deceased man’s horde of ancient, largely ignored vinyl records. While the deterioration of the sound is readily evident in the hiss and pops of the music (and varies heavily from track to track), it’s still a remarkable find. Much of the music collected here would very likely never be heard again without collections like these, and we would lose valuable knowledge of a time relatively close to ours and yet increasingly distant. Some of the songs may sound shrill or (literally) preachy or starkly old fashioned. But for all that, it’s a fascinating part of our musical history, saved from disappearing once again for at least a little while.