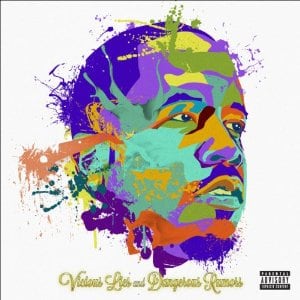 [xrr rating=2.75/5]Big Boi, better known as the half of beloved rap duo Outkast who actually puts out rap albums, has returned with his sophomore solo release Vicious Lies and Dangerous Rumors. The follow-up to 2010’s well-received Sir Lucious Left Foot: The Son of Chico Dusty, an album that suffered three years of label red-tape before its eventual release, Vicious Lies and Dangerous Rumors was anticipated as being Big Boi back-to-basics giving us a quality rap record with relative ease. Yet, Vicious Lies and Dangerous Rumors doesn’t feel like a complete successor to Sir Lucious Left Foot, but rather a sequel that’s essentially an album’s worth of its predecessor’s Vonnegutt assisted cut “Follow Us” wholly mixed with a “Shutterbugg”-type soundscape. It’s also entirely baffling.

Big Boi was never the more experimental half of Outkast. Rather, he was the steadfast traditionalist who went along for Andre 3000’s ride but kept the duo planted enough within rap’s hallmarks to be innovative without being overbearing. When Andre’s solo tracks got too “out-there” (such as all but three tracks from the duo’s wretched Idlewild album, which was marketed as a soundtrack as almost an apology for how below the group’s standards it was) it was clear why they needed one another to bring out their absolute best. That’s why it’s so weird to hear a Big Boi album that’s so ambivalently melodic and largely influenced by indie-rock.

That’s not to say the production here is necessarily bad or that Big Boi’s ever been particularly conventional. Rather, as great as his rhymes and the production often are on this album, it’s not as frequently that they sound great together. The tracks produced by longtime collaborators Organized Noize, “The Thickets” and “Lines,” are the two most in-line with how a 2012 Big Boi album should sound. His sharp lyrics and progressive flow patterns fit perfectly over a tidal wave of futuristic Dungeon Family funk. Similarly, the brute force of “In the A” (minus an embarrassingly underwhelming Ludacris verse) serves as a reminder of how great Big Boi sounds over a traditional Atlanta bulldozer of a beat. It’s hard to reconcile that these particular tracks are meant to be on the same project as songs with Phantogram or Little Dragon.

Again, I’m not implying the extra-genre additions are poor, just unfitting. With two or three Big Boi verses sprinkled over oddly constructed indie-rock/pop tracks, Vicious Lies and Dangerous Rumors sounds much more like a mash-up project than an actual album. Perhaps, given the runaway success of the various Big Boi mash-up projects made from his last album, this was the sound he was going for. Still, there’s something oddly awkward about the execution. With genre-bending being his partner Andre 3000’s territory, part of Vicious Lies and Dangerous Rumors feels like he’s trying to win his estranged comrade-in-rap back. It also feels like he’s trying to be both Big Boi and Andre for the people still clamoring for an Outkast record. Either way, all Vicious Lies and Dangerous Rumors manages to do is alienate those of us wanting that next level Big Boi release.

Despite Andre’s absence (which Big Boi chalks up to Andre’s prior commitments with Gillette razors), Big Boi does show his knack for properly utilizing guest appearances is as sharp as ever. The aforementioned Ludacris hiccup aside, the visiting MCs really bring their all to this record. Killer Mike caps off his stellar year with a scene-stealing verse on “Thom Pettie” (a tracks whose “Tom Petty that ho!” chorus has one-upped “DDT that Ho!” as the best use of a ho on a Big Boi track) and B.o.B. actually takes time away from singing on pop records to remind us that he was at one point one of the most exciting new rappers of his generation with a wonderful return to form on “Shoes for Running.” It’s too bad the same can’t be said for some of the guest vocalists, namely Bosko on “Tremendous Damage,” whose hook contains the line, “The weight of everything is tearing up my sober,” which may very well be the dumbest line said in the hook of a song all year. Otherwise, while there are some great moments, Vicious Lies and Dangerous Rumors will ultimately be remembered as a record in Big Boi’s catalog that’s as transitional as it is inconsequential.