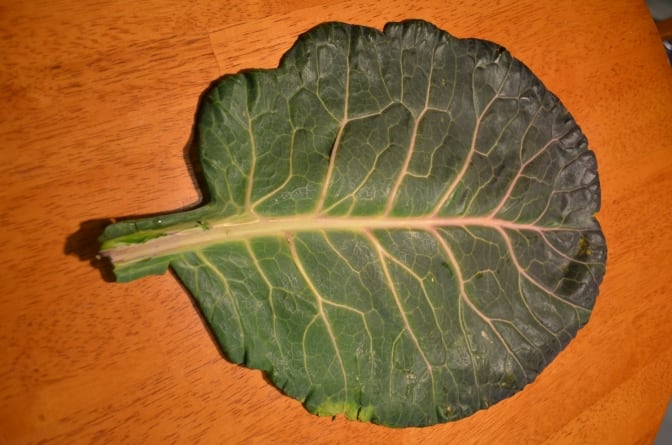 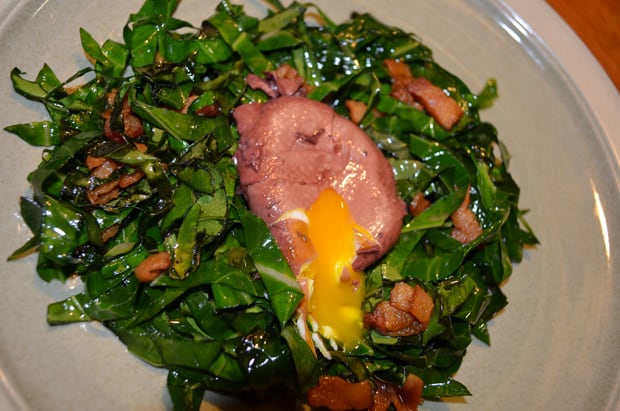 The food writers here at Spectrum Culture grew a little tired of watching their colleagues in music, film and books debating, ranking and compiling their “best of” lists for 2012 while we sat idle. Really, why should they have all of the fun? In response (protest) we decided to present you with something much more ephemeral but no less dear to our hearts: the 2012 ingredients of the year.

When collard greens first appeared in our weekly CSA share towards the end of the summer, I stared at them with what I am sure was a stupid look on my face for a good long while. I had no reference point for the leafy green outside of the odd experience with southern bbq-style stewed greens. It was the first real curveball that our CSA threw our way and I was utterly clueless on how to handle them. After much experimentation, a few inedible disasters and a little bit of luck, I settled on a surefire technique for cooking the tough green that doesn’t require hours upon hours of stewing. By the fall, I came to look forward to getting collards in our share, and now that the local farm is shut down, I miss them immeasurably. It’s easy sometimes for a home cook to fall in love with things that are easy for them to cook, that they know will be a surefire success. It can be much more rewarding to confront an unknown quantity and then have it become the source of the meal you look forward to every week. That’s why collard greens are my ingredient of the year.

To prep the collard greens remove their mid-ribs and stack them one on top of the other. Roll them tightly into a “cigar” and then slice them as thinly as you can crosswise.

Combine the red wine, vegetables and herbs in a small saucepan, bring to a boil, reduce the heat and simmer until it is reduced by one third. Remove from the heat and strain the herbs and vegetables from the liquid. Set aside. (If you do not have a small saucepan, do this in a regular saucepan but poach the eggs in advance as you normally would, transfer to an ice bath to stop the cooking, and set them aside. When it is time to plate bring the strained liquid to a simmer and spoon the mixture over the eggs to re-heat).

Put a large skillet over medium high heat and add the oil. Once it is hot add the lardons and cook them until they are crisp and their fat is rendered. Add the sliced collards, turn the heat to high and cook them for two to three minutes until they have wilted. Add the rice wine vinegar, season with salt and pepper, and stir to combine. Divide the greens among four plates.

Heat the poaching liquid to a slow boil and add one egg at a time to poach. It is difficult to see the eggs so if you are inexperienced with poaching I recommend following the alternative method above. Cook for three to four minutes until the whites have set and then remove with a slotted spoon and plate on top of the cooked collards. 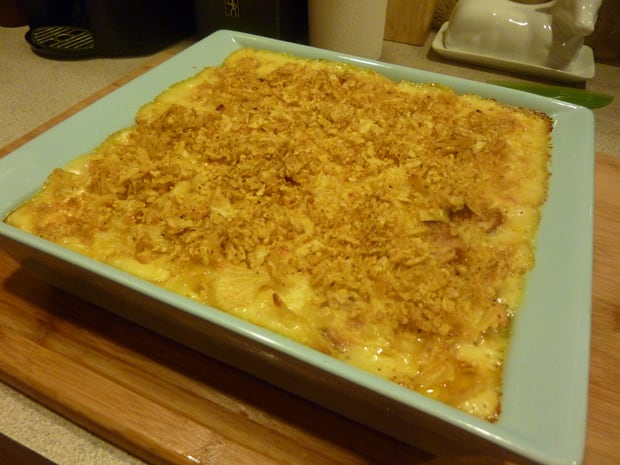 When it comes to spicy pepper sauces, Sriracha is the current cultural darling. Cock sauce is quickly replacing chipotle as the flavor-to-be, popping up on menus and in food mags in everything savory and the “dangerous” sweet stuff. I love Sriracha dearly—{The Sriracha Cookbook} is one of my favorite recipe collections. But secretly, my heart belongs to another. Secret Aardvark Sauce, a fiery condiment blended and bottled here in Portland, Oregon. The sauce carries a habanero kick, but is much richer in flavor (and ever-so-slightly chunkier) than other hot-to-the-point-of-inedible sauces peddled this time of year for the void-of-personality douchebags on your holiday shopping list. Garlicky! Tomato punch! What is that—a faint whiff of sweetness? Secret Aardvark, let’s make breakfast burritos. Let’s caress some tuna salad into the stratosphere. Let’s make the best motherfucking macaroni and cheese I’ve ever baked. Just please, don’t speak of our affair in the pantry. Sriracha hates when I mess around with other condiments.

In a large pasta pot, boil salted water and cook noodles to package directions. Drain when the noodles are still al dente–cooked, but with a toothsome bite. They will cook for additional time during the bake. Reserve noodles, and keep the pasta pot handy.

In a deep-bottom saucepan over medium-high heat, melt the butter. Add the flour and whisk together, continuing to whisk until the mixture forms a golden-hued roux, about five minutes. Slowly add the milk, whisking constantly, and bring to a slow boil. As soon as the mixture begins to bubble (about an additional 5-7 minutes), remove from heat. Mix in 3 cups of the grated cheese, paprika, garlic powder, cayenne pepper and salt and pepper. Mix until the cheese has melted into the hot mixture.

Place the reserved noodles back into the pasta pot, then add the pancetta, chiles and cheese sauce. Mix thoroughly, then spoon into a 9″x9″ casserole baking dish. Top the dish with Secret Aardvark to taste (my idea of a good spicy layer is 4-5 squirts of sauce, ensuring each scoop of macaroni and cheese served will have at least a few drops), and with the remaining 1/2 cup of cheese. Bake at 375 for 35 minutes, when it will be bubbling and too good to resist. 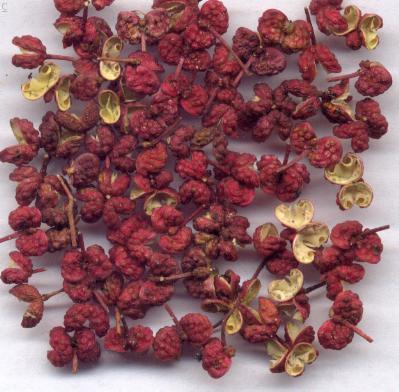 When I think of my favorite dishes of the year that I’ve cooked, many of them are Chinese and many of them include this amazing little relative of the juniper berry called a Sichuan pepper or prickly ash. This used to be difficult to find, but now, many of the Asian markets that I frequent in Portland, OR have them readily available. Unlike many spices, they’re not incredibly expensive. My favorite thing about these “peppers” is that they’re not of the capsicum variety, rather they create a delightful/awkward/curious numbing sensation in the mouth (it’s like Whip-its for just your mouth).

Years ago, a friend gave me a cookbook by Jacki Passmore called Fire and Spice. It was my first real cookbook and I devoured it. This set the course for my tastes in food, my spice and sauce cabinet, and my culinary abilities. If anyone is paying attention, they’ll notice that I practically eat only Asian food and barbecue. Passmore’s groundbreaking (to me) book inspired me to pick up another one of her books: “Savoring China.”

I like things flavorful, and balance is only something I’m getting used to. I find that Passmore is a bit light on things like garlic and ginger; I tend to double or triple the amounts that she offers up. I also, having a history of being vegetarian, have been known to substitute firm tofu for pork on several occasions. So, here’s my doctored recipe for Sichuan Eggplant, one of my favorite dishes ever.

First off, a need-to-know: this dish takes a lot of time to make. Much of the time, though, is spent waiting for the eggplant to either dry out or drain themselves of oil. I will generally make an accompanying dish (I like the Lion’s Head meatball dish) to fill in this gap. I highly recommend starting out with just the eggplant, preparation-wise, and then moving to the other ingredients later. I’ve always hated the way this was written because I would do things in the wrong order; I’m officially fixing that now!

1 lb (500kg) eggplant: 4 Asian eggplants or 2 round eggplants (for the Brits, these are aubergines, which is a French word, by the way. I thought you disliked the French?)
1 tbs salt

Slice the eggplant into medallions, about 1/3 inch wide, then cut in half. If using the Asian eggplant, cut into strips 2 inches by ¾ inch wide by ¼ inch thick. Place eggplant in the colander in a sink and salt it. For the next 30 minutes, find something interesting to do while the salt draws off the bitterness of the eggplant.

OK, you’re back? Rinse in cold water and pat dry with a clean kitchen towel.

In a wok over high heat, warm the oil until the surface starts to ripple. Add the eggplant pieces and fry for 1–2 minutes (my stove is old, so I have to go long). Then reduce the heat to medium high and cook for another 5–8 minutes until browned. Place the colander over a bowl (or a cast iron skillet) and tip the eggplant and oil into the colander. Leave to drain for 30 minutes to 4 hours.

Now it is time to do the rest of the stuff!

Third step: mixing it all together and preparation while draining

In a mixing bowl, combine the pork or tofu and hot bean paste. Mix well. Set aside.

Slice up the rest of your ingredients now and prepare everything else. When you’re done waiting for the eggplant to drain, come back.

Okay, we’re back again? How was that other dish you made? Or did you beat that next level of Zelda? Great, let’s cook! This part’s actually quite quick.

Return the wok to high heat and add a tbs of the eggplant oil drippings. Fry up the pork, garlic and ginger until the pork is cooked and lightly colored. If using tofu, just cook it until it is hot and your kitchen makes everyone in the house drool from the smells of garlic and ginger.

Return the drained eggplant to the wok and add the soy sauce, hoisin, black vinegar, and sugar. Cook, stirring carefully for about a minute. The eggplant should begin to break up at this point. Thicken the sauce with the cornstarch mixture (another 40 seconds to a minute).

Finish this by stirring in green onion, Sichuan peppers and sesame oil. Add salt if you need to taste. Top with cilantro if you have it.Serve it up with rice or that other dish you prepared. Give it to your boss the next day. Be the hero.